Pigging out in the land of jamón! :b 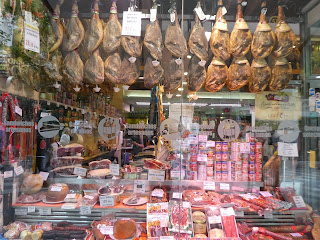 They take their jamón really seriously in Spain... 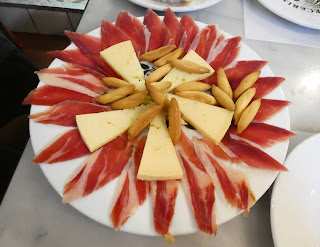 Fancy this plate of jamón, cheese and toasted breadsticks? :b 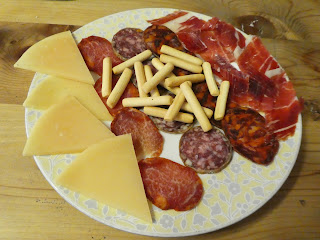 How about this charcuterie and cheese platter? ;b
I love jamón.  Maybe not as much as Ponyo loves ham but trust me when I say that I love it plenty enough.  And part of me wanted to order it every time I saw it listed on the menu in a cafe, restaurant or bar when I was in Spain!  Amazingly, I was able to resist doing so.  And it probably was a very good thing too as jamón is served for breakfast as well as lunch and dinner in Spain!
As it turned out, I did have jamón at breakfast, lunch and dinner in Spain.  But even while the temptation to do so did get stronger and stronger the closer I got to my departure from the country, I did manage somehow to amass sufficient will power to prevent there being an actual day when I had jamón at every single meal!
In so doing, I was able to try a good variety of dishes -- with some actually consisting of vegetables and seafoods rather than "just" some part of a land animal -- while I was in that Western European country whose people definitely do seem to have a particular love for pig meat.  Still, believe you me when I say that I truly did eat a lot of jamón in Spain -- and a good enough variety of it too, since I actually did go ahead and sample a good amount of the Prosciutto-like Jamón Serrano, the drier -- and tastier, as far as my tastebuds are concerned -- Jamón Ibérico, and also the super deluxe -- and deeply delicious -- Jamón Ibérico de Bellota while in the Land of Jamón!
Incidentally, I found it interesting that it's really only the tourists who drink sangria in Spain -- with the locals preferring to drink tinto de verano if they do go for wine mixed with something (as opposed to straight wine or, even more popularly as far as I could see, beer) -- and that, outside of Valencia, paella tends to be ordered by foreign visitors to Spain rather than local residents but, on the other hand, jamón really does seem to be genuinely beloved by pretty much all Spanish people.  Consequently, one won't feel shamed when ordering it in Spain -- if one needs one more reason to unashamedly put away lots of it when there! :)
Posted by YTSL at 11:46 PM

I still can't figure out why Canada bans the import of Jamon Iberico (and of course the Bellota variety) but allows Jamon Serrano. I really miss the good stuff.

Are you sure that Canada still bans the import of Jamon Iberico? I found a 2012 newspaper article which had mentioned a tariff against Jamon Iberico getting lifted...

Thanks for the article! Best part of the article is a little link to a merchant that imports the bellota variety, sliced, boneless or a whole bone-in fuente! At CAD$1400 per fuente I don't think I can afford to keep one at home though ... but at least it's finally available.

Maybe you can celebrate the good news about the Jamon Iberico being available in Canada by getting some of it -- though not quite a whole bone-in fuente's worth! ;b