Looking forward (with ticket in hand) to seeing Funassyi performing at the Charamel Splash Tour concert in Hong Kong! :) 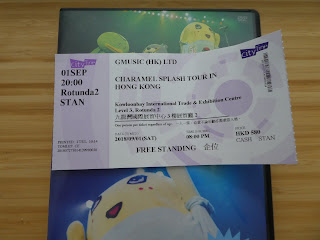 
Around this time two years ago, my favorite Pear (Fairy) came over to Hong Kong to help promote the Funassyi Fairs at the then existing Hong Kong branches of Wired Cafe over in Tsim Sha Tsui and Causeway Bay.  That same year, Funassyi headlined concerts at the storied Nippon Budokan Hall in Tokyo (and Osaka-Jo Hall in Japan's second largest city) -- and in a move that showed how absolutely fabulous the Pear is, went on to announce that it would be donating its appearance fees and royalties from the sale of its merchandise at those two concerts to Kumamoto earthquake relief (which, for the record, turned out to be 7.3 million Yen in total).


In the years since, Funassyi has kept on showing how musically inclined -- by doing such as forming a all-yuruchara band called Charamel) -- and also charitable it is.  But in both 2017 and 2018, the formerly globetrotting Pear looked to have lost its love for international travel.  So imagine my great surprise and excitement upon learning that it (along with the rest of Charamel) would be appearing in concert in Hong Kong this September 1st in what will be the group's first -- and hopefully by no means only -- Splash Tour stop outside of Japan!


I admit it: Part of me found this announcement so unbelievable that after the initial announced date for when one could get tickets for the concert got postponed by a couple of weeks, I got to wondering whether there really would be a Charamel concert in Hong Kong.  Then, when a second ticketing date was announced for the concert (little than a month before the scheduled musical event), I got to worrying that I would not be able to get my hands on ticket; this particularly after it became pretty clear that quite a few Funassyi fans from Japan were preparing to fly over to Hong Kong for the concert!

With ticketing scheduled to begin at 10am today, I was alerted to the fact that the relevant ticketing website already was "busy" at 9.30am.  Fully anticipating that it and the ticketing agency's phone lines would be jammed with Japan- as well as Hong Kong-based fans trying to get tickets for the concert, I made haste to head over to a ticketing outlet where I would be able to get a ticket from a staffer with access to the internal ticketing system (not accessible by members of the public) rather than just the external one that was effectively having a meltdown due to high demand.

Getting to the store five minutes after it officially opened for the day, I found myself in a queue behind two other people -- one of whom was taking her sweet time choosing which tickets to buy for another event.  After 10 stressful minutes of waiting, I finally got to the counter and found to my great relief that I was successful in making my purchase.  More than incidentally, the woman behind me in line this morning turned out to be a fellow Funatomo -- who told me that she had headed over to ticketing outlet after having had problems getting through to make a purchase over the phone.

Since I now had a Charamel Splash Tour in Hong Kong concert ticket of my own, I was able to be happy for her -- and every other fellow fan of the Pear with the words "fun" and "ass" in its name(!) who has managed to secure tickets to the event.  What's more, I really would love for this concert to be a sold out affair -- even if this means that I will have to fight a whole bunch of people to get a prime seat on September 1st since there is a "free seating" arrangement in place for what I fully anticipate will be a super fun affair! ;b
Posted by YTSL at 11:21 PM

Hi. Can i ask you about redeeming the ticket that i bought online from cityline? I used the card that doesnt have a magnetic strip on the back and now im not sure on how would i be able to get the ticket since i wouldnt be able to swipe my card on the machine. If i get it on the outlet do i still need to present the card to them or just the receipt? Thank you.

You can ask but I'm sorry, I don't have an answer -- as I didn't buy my ticket from Cityline online. Also, I'm not familiar with credit cards without magnetic stripes on the back and thought that they all did! If I were you, I'd go to a manned outlet with both the credit card I used to make the purchase and the receipt. Good luck!