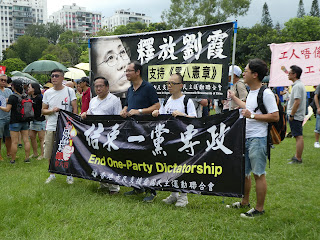 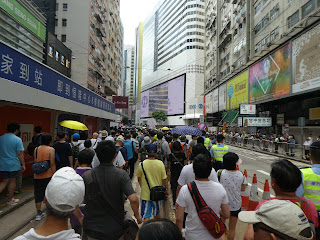 Out on the streets with thousands of others 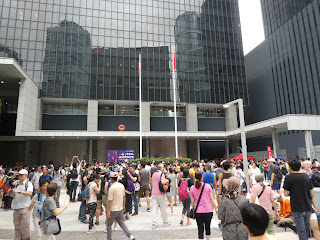 What a nice surprise it was to see that Civic Square
has been reopened (at least for today)!

Since I began taking part in the annual July 1st march in 2012 (the year that Hong Kong's fourth -- and thus far most unpopular by far -- Chief Executive took office), I've noticed how different the mood among its participants can be from year to year.  Over the years, I've sensed -- and experienced -- anger, hope, joy, frustration and defiance.  Depending on the year, I've also found myself marching along to music (including the Cantonese version of Do You Hear the People Sing?), political chants or dogged silence.


At today's pro-democracy rally, my general impression was of the crowd embodying a quiet but resolute determination to prove wrong those who have argued that it's illegal and also to not be cowed by the threat of police violence (that comes from the now well-known tendency of the Hong Kong police to over-react against non-violent protest).  The mood on the street most definitely was not as festive as I've felt it to be on at least one earlier occasion but neither was it as fractious as I've also felt it to have been on a couple of other ones.

It undoubtedly helped tempers stay even that this year's July 1st march actually got going very close to the official start time (in contrast to the more than hour long delays in previous years that were the result of such as the police not ensuring there would be adequate lanes closed off to vehicular traffic on the streets that the protesters would be walking along).  In addition, spirits were lifted by our seeing how sparsely attended the pro-Beijing event which Victoria Park's football pitches were booked up for (in order to deny their use by pro-democracy activists) was and, also, how vastly out-numbered the pro-Beijing counter-protesters were by those who had taken to the streets to show their care, love and support for Hong Kong, and wish to see genuine universal suffrage attained by its residents.

A word on the march numbers: it's been reported as being the lowest in three years but my view, as someone who took part in all of them is that this year's attendance was definitely higher than last year's (which, incidentally, I attended with just one friend compared to triple that number this year) and 2015's (which I went to alone) and also possibly 2016's (which I attended with another friend).  More than incidentally, I also found it interesting that this year, the march organizers actually announced where they would be doing their count and that it was fairly early along the route that they had told people days before that they were welcome to join the march midway.

Take it from someone who was there right from the start to the end of the march: it was noticeable how certain points of the route seemed to be more crowded than others.  So I can but surmise that a number of people actually opted to take part in the protest without going along the entire march.  In light of certain of the participants being on the elderly side as well as some other participants being reliant on wheelchairs to get around, I fully sympathize if the spirit was willing but the flesh was weak as far as they were concerned; and this too with regards to those parents who brought their young children along (because, this being Hong Kong, it is indeed a regular thing for pro-democracy activists to range from the very young to the very old, and for people to want to educate the next generation about their rights!).

For the record: this year's July 1st march began at a section of Victoria Park closer to the Tin Hau MTR station than Causeway Bay and passed through Causeway Bay and Wan Chai before ending in Admiralty; with the route taking me some three hours to complete (not least because there were times when the march became a crawl because of how thick the crowd on the street got).  However tired we participants were though, we became all smiles at march's end when we discovered that Civic Square had been re-opened to the public (at least for today) and we could set foot in it for the first time in years!
Adding to our cheer was the weather gods appearing to be on our side this afternoon: for even though the Hong Kong Observatory had issued a thunderstorm warning, it only sprinkled on us for a few minutes.  In addition, the clouds that gathered in the sky provided us with welcome shade and made it so that we didn't have to use the umbrellas that pretty much every protester had brought along to the march to protect us, if needed, from the sun, rain, tear gas or pepper spray! :)
Posted by YTSL at 11:23 PM

sure hope all people stay safe. There a lot of craziness going on world.
Coffee is on

There was no violence nor arrests at the protest march that I know of. Honestly, Hong Kong protests are by and large far more peaceful than even sports victory celebrations in America! :)