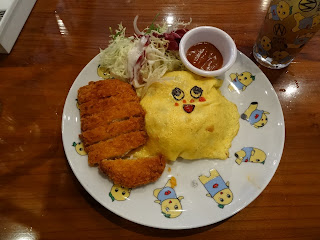 Would you eat this Funassyi-faced omurice along
with the tonkatsu and salad it's served with? 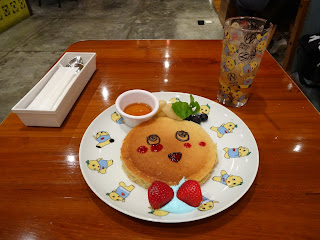 How about this Funassyi hotcake and pear juice? 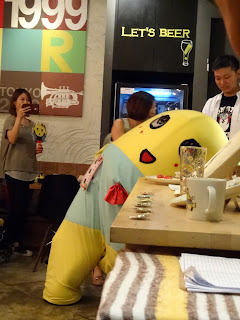 The Pear being served some of the Funassyi hotcakes
during its visit to the Wired Cafe in Tsim Sha Tsui! :O
Until last week, I did not know of the existence of Japan's Wired Cafe chain, and its two branch cafes in Hong Kong.  But thanks to Funassyi and the We Love Funassyi website/blog, I've had two meals at the Wired Cafe in Causeway Bay this week -- and plan to go there at least once more while its Funassyi Fair is on (i.e., until the end of next month)!
The first time I went to have a meal at the Wired Cafe, the friend I was with opted to order from the regular menu but I felt obliged to order both food and drink from the special Funassyi-themed menu.  Although the Funassyi omelette tonkatsu (as it's billed on the menu) looks gimmicky, it's actually not only tasty but also very filling -- seeing as the omelette is stuffed with rice that's cooked with corn and bits of pork.  As for the pear juice: it tastes both refreshing and healthy -- and I like it so much that I ended up having two glasses of it on my second visit to the Wired Cafe (as well as just one glass on my first visit)!
For my second meal at the Wired Cafe (which I had while waiting for Funassyi to show up this past Thursday for a "meet and greet" session), I ordered the Funassyi hotcake on the recommendation of The Pear, who had been fed a sample of it through its infamous "Illusion" at its first "meet and greet" event earlier that day.  If anything, this dish is cuter looking than the Funassyi omelette tonkatsu -- with the hotcake made up to look like Funassyi's face but also coming with strawberries arranged to look like red ribbon on Funassyi's "pear suit", light blue cream which alludes to the light blue part of the "pear suit" and mint leaves representing Funassyi's "stalk" along with some bonus blueberries and chunks of the kind of Japanese pear that Funassyi was before it turned into a pear fairy -- and actually also better tasting too!

Although I know that the unofficial mascot of Funabashi is a genderless fruit which is totally fine with people eating pears and also food done up to look like it, I must admit to finding it a bit weird to cut into and up those sections of the dishes that had been made to look like Funassyi's face.  (And to judge from the reactions of some other diners as seen in Youtube videos like this one, I'm not alone in feeling this way!)
Also, at both meals, I felt somewhat guilty when seeing what looked like Funassyi's trusting eyes gazing up from the dish at me!   So, if truth be told, the chances are high that I won't order another food item with what looks like Funassyi's face on it the next time I go to the Wired Cafe.  On the other hand, I have absolutely zero qualms to order more pear juice to drink.  And although I haven't succumbed to the temptation yet, I probably will also buy one of the kawaii Funassyi-patterned glasses that the pear juice is served in -- and which are available for sale while the Funassyi Fair is on there! ;b
Posted by YTSL at 11:59 PM

Cute dishes.... haha....
I would feel shy eating these cutesy dishes.... it's like an old woman trying to act cute.

Hmmm... is kawaii stuff considered to be only for kids in Singapore? That's definitely not the case in Japan or Hong Kong! ;b