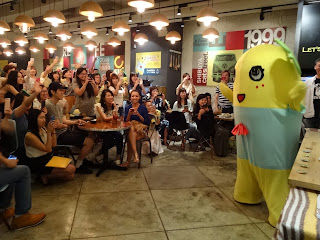 Funassyi and fans at the Wired Cafe
in Tsim Sha Tsui this afternoon! :) 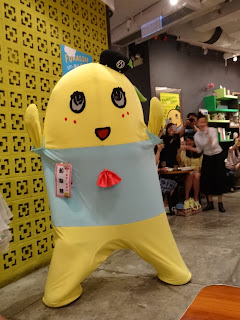 The hyperactive Pear (Fairy) strikes a pose
at the Wired Cafe in Causeway Bay this evening :b 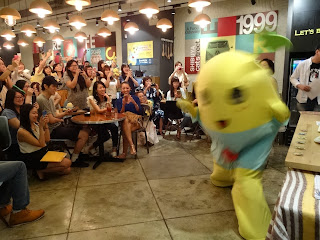 Funassyi's so fast moving at times
that it becomes a blur in photos! :O

When I read on the We Love Funassyi blog a week ago that there would be Funassyi-themed cafes here in Hong Kong this summer, I decided that -- unlike with their Hello Kitty equivalents -- I would be able to stomach Funassyi-themed food and drinks since, well, the unofficial mascot of Funabashi is supposed to be a pear!  Then, when I found out that The Pear would actually be making appearances at the Hong Kong Wired Cafes, I knew that I had to go there to catch sight of Funassyi in the flesh (so to speak)!


Fearing that this extremely popular character would attract mega crowds (like that pictured on this page), I contacted the Wired Cafe people and made a reservation for the evening "meet and greet" event at the Wired Cafe in Causeway Bay.  For good measure, two days before, a friend and I went and dined there to get a sense of the place (and the (number of) customers it was attracting).  And when the day of Funassyi's planned appearances in Hong Kong came, I was so fearful of not catching sight of The Pear in pe(a)rson that I ended up also going to the lunch event at the Wired Cafe in Tsim Sha Tsui to give myself an extra chance to catch a glimpse of a character I've come to really adore!


Whereas the Wired Cafe in Causeway Bay wasn't filled with Funassyi fans on Tuesday (and, for that matter, also wasn't as replete with Funassyi-themed items and decorations as the Funassyi Cafes in Japan, and like I was hoping would be the case), the Wired Cafe in Tsim Sha Tsui was packed with Funatomo -- some of whom had come all the way from Japan! -- and their Funassyi items this afternoon.  Unable to get a seat at the first Funassyi "meet and greet" event of the day, I actually was happy enough to stand just outside with a bunch of other fans and still be able to observe the super energetic Pear in action (doing such as jumping so high at one point that he actually hit a ceiling lamp in the cafe, and crouching down, as is its style, when beholding a child so as to be at eye level with the small human!).


Weird as it may seem to some people, I really did get a thrill to not only see and hear Funassyi in real life (rather than on Youtube videos, etc.) but also see that it does indeed have (a lot of adult) fans. And as I expected (but the Wired Cafe manager didn't seem to when I spoke to her a few days ago), Funassyi fans were out in force again at the Wired Cafe in Causeway Bay this evening.  But this time, I was fully prepared -- and not only was my reservation honored but I was allocated what turned out to be a prime seat maybe less than 10 feet away from where Funassyi stood, chatted for a bit and struck a series of poses to the delight of the camera-wielding Funatomo.


The highlight of the evening -- and, actually, my day, and possibly week and month! -- came early on during the event as The Pear walked over to the part of the cafe where I was seated.  Instinctively, I put up one of my hands, Funassyi swiveled and looked at me, and then gave me a high five!  Honestly, I'm not sure if I squealed when this happen.  But I can tell you that even one hour after this happened, I could feel a smile spread across my face!

So here's the thing about The Pear that I really love: that is, that it actually is capable of bringing joy to people as well as entertaining them, and making them smile and laugh.  I think one big reason for this is that this character with the words "fun" and "ass" in its name(!) looks to go about its business so whole-heartedly.  Also, Funassyi seems to get so much delight from making people happy.  Something else that I've got to observe up close now is how The Pear is incredibly wonderful at giving seemingly each and every member of the crowd "personal", "individual" experiences.

Lastly, for now, there's its generosity and willingness to be inclusive.  For example, at both today's "meet and greet" sessions, The Pear made a point to acknowledge, interact with and pose for those who were outside the cafe as well as those inside.  In addition, it made sure to speak a few words in Cantonese, Putonghua and English even while obviously being most fluent and comfortable in its native Japanese.  So, especially after today, I'm really a fan, and believe I have many good reasons to be one! ;b
Posted by YTSL at 11:40 PM

Wow, how much fun this looks like. What a positive pear!! Love it's antics. Makes me smile and laugh.

Both the Funassyi "meet and greet" sessions were indeed a lot of fun. BTW, The Pear has posted short videos of the Tsim Sha Tsui and Causeway Bay events on its Twitter account:-