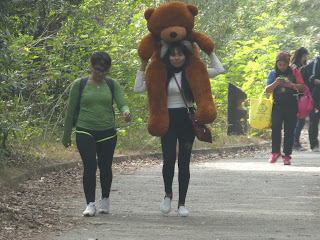 The things one see while out hiking in Hong Kong...! 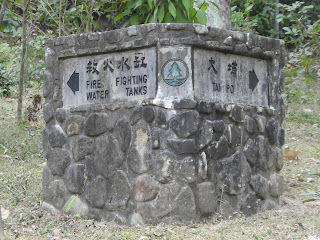 The sign for "Fire Fighting Water Tanks" that can so easily be
misread as "Fire Water" + "Fighting Tanks" amused me too! ;b 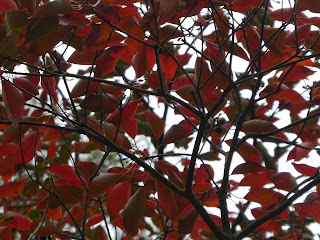 And yes, we're deep into winter in Hong Kong but Mother Nature
seems to like making it appear like autumn still!

On New Year's Day last year, I revealed that one of the goals I'd set myself was to walk at least 10,000 steps each day.  While I ended up not hitting this mark every day in 2017 (with typhoon and severe storm days being among those days in what actually was an unusually wet year where I spent much of a 24 hour cycle at home), I was happy with my doing so far more often than not -- and even having days when my pedometer told me that I had walked more than 20,000 steps in a single day.
And 2018 has gone off to a good start as far as that resolution's concerned since, thanks in large part to my having gone on a hike this afternoon that took me from Shing Mun Reservoir to near Yuen Tun Ha (over in Tai Po District), my pedometer registered close to 21,000 steps by the time I got back to my apartment this evening!
For the record: the trail I opted for today is one I'd previously been on a couple of times but not recently -- with the result that much of the scenery seemed interesting even while certain landmarks along the way didn't seem unfamiliar.  Something else I also found interesting was how certain sections of the route got me thinking back to particular events or things seen when I previously passed through or along them.

As an example, early on in the hike, my group tramped through an area where monkey spottings are common and both one of the friends I was with and myself got to recalling the time we had seen a monkey steal an ice cream from a (human) child and I also told of the time I had seen a monkey and a woman involved in a tug-of-war over a piece of barbecued chicken!  And near Lead Mine Pass, I recounted to my two hiking companions this afternoon my having spotted a snake in the vicinity on a previous hike!

After today, I wonder whether a certain stretch of today's trail will be forever associated in my mind with the sighting of a woman carrying a very large teddy bear on her shoulders that we made this afternoon!  Perhaps my having previously sighted such as Cosplayers, couples in formal wedding dress and even pseudo-models dressed as mermaids should have prepared me for this particular vision.  But the truth of the matter is that my brain told me initially that the woman was carrying a child rather than the giant stuffed toy that turned out to be the case!
And on the subject of one's brain initially getting fooled into seeing something unintended: Every time I pass the sign for "fire fighting water trucks" along the way to Leadmine Pass from Shing Mun Reservoir, I have to admit that my first reaction has been to read it as "fire water" on one side and "fighting trucks" on the other!  And yes, that doesn't make logical sense -- but, heck, it's also true enough that one does come across many pretty logic-defying sights while out hiking in Hong Kong! ;b
Posted by YTSL at 10:46 PM