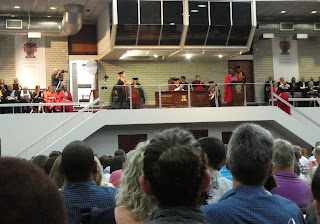 At a Stellenbosch University graduation ceremony 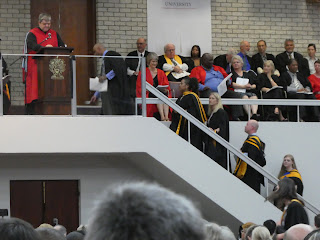 Masters degree awardees waiting their turn on the staircase
On the fifth day of my visit to South Africa earlier this month, I spent several hours on the hottest day of my vacation (with temperatures rising up to 38 degrees Celsius) in a hot hall within Stellenbosch University that's normally used for sporting events such as basketball games but, on the day, was serving as the venue for the institution of higher learning's graduation ceremony.  Along with several hundred family members and friends of various degree and diploma recipients, I was at the kind of event that, upon leaving the groves of academe early this century, I had thought I'd not be witnessing again -- and definitely never thought that I'd be attending in South Africa, on the campus of an erstwhile bastion of Afrikaner culture and the Afrikaans language.
The joint oldest university in South Africa and the oldest extant university in Sub-Saharan Africa (with the University of Cape Town), Stellenbosch University was founded in 1866 as the Stellenbosch Gymnasium and went on to attain university status in 1918.  For a good part of its history, its primary medium of instruction was Afrikaans, and its student population and faculty composed only of people classified as "white" under South African Apartheid law.
And although Apartheid had been abolished by the time the Afrikaner friend I was there to see get his Master's Degree was a Stellenbosch University undergraduate, I still was able on this trip to get a good idea of what he meant when he told me that for much of the time that he has lived in South Africa, he's not been spending much time with non-white people: not because he went out of his way to avoid doing so but because there really weren't that many non-white people around where he lived, studied and worked.  Put another way: much of the country remains segregated -- along economic lines that also often still mirror old "racial" ones.
At the graduation ceremony I attended at Stellenbosch, it was pretty noticeable that the majority of the people -- be they graduating students, their family members and friends, and the university faculty -- present in that hall were "white".  In addition, a glance at the names of the honorees also clearly revealed that there were more Afrikaners in the mix than, say, those of British descent or those who are more recognizably African in the eyes of many people.
Equally though, it was noticeable to me that Stellenbosch University had moved pretty far away from its "cradle of Apartheid" past.  Just two years after student protesters won the right to be taught in English at the university, English featured more prominently than Afrikaans in the speeches given at the graduation ceremony I attended, its program featured the use of all three official languages of the Western Cape: i.e., English and isiXhosa as well as Afrikaans, and I heard everyone around me singing -- with gusto -- the super beautiful and touching South African national anthem whose first two lines are in isiXhosa before continuing in Zulu, Sesotho and Afrikaans before concluding in English.
Beyond the multi-lingualism at the ceremony, I also found it really cool that the university's Rector and Vice-Chancellor, a man with the distinctly Afrikaner surname of de Villiers, not only (largely) spoke to the assembled audience in a language that wasn't his native tongue but also gave a speech that did such as reference and include a quote from a book by "British Nobel-prize-winning author, Kazuo Ishiguro".  In addition, I must admit to having been  rather surprised to see people of East Asian descent being among the degree recipients along with various individuals who are identifiably part of  "the Rainbow Nation", all of whom uniformly looked radiantly happy when accorded their moments of glory in front of a good-sized crowd of proud mamas, papas and the like! ;b
Posted by YTSL at 9:52 PM