Travelling to and in Japan during the winter low season 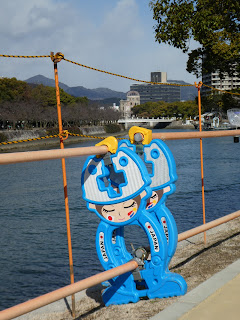 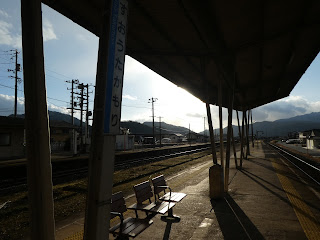 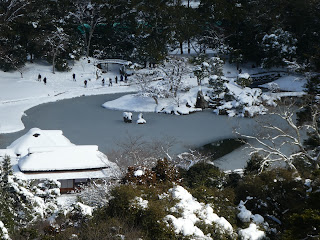 Japan as I've never seen it before in real life -- covered in snow!
Way before my South Africa trip last month, I had booked flights that would take me to Japan and back in late January.  After having waited until last October to visit Hiroshima, I could hardly wait to return to the city whose regional culinary specialties rival -- and maybe even surpass -- that of Osaka, whose kushiage and microbrew beer I absolutely adore, as far as I'm concerned.  (Now if only this western Japanese city had a Funassyiland, like Osaka, Tokyo or Funassyi's hometown of Funabashi...!)
So when I saw a good deal for flights to and from a part of Japan that's less than one and a half hours away from Hiroshima by shinkansen in the early part of 2018, I decided to go for it.  Coupled with a great JR West rail pass, I planned out an itinerary that would have me spending some time in Hiroshima but also travelling to a few other places: a few of which I'd previously been to but also a few of which would be "virgin" territory for me.
Something else that'd be new for me would be travelling to and in Japan in winter.  Days before the trip, I remained hopeful that, despite the reports of this winter in Japan being colder than usual, I would not see any snow during my trip.  But as it turned out, I saw snow falling every day bar one of this recent Japan visit -- and that one day where I didn't see any of the white stuff actually was day one of the trip (which is particularly ironic considering that it was the same day that Tokyo recorded its largest snowfall over a single day in years)!
For the most part though, the parts of Japan that I was in wasn't too affected by the snow or accompanying record cold temperatures.  For example, while I took close to 10 train rides in my one week in the country, I only experienced delays (caused by the falling snow, or anything else for that matter) on two of them; and neither of them added more than an hour to my journey time.  And while there were times when it was distinctly chilly outdoors, most of the indoor spaces that I spent any good amount of time in were comfortably warm -- more so, in fact, that my apartment in Hong Kong in winter!
In addition to the good flight deal that I got, one other motivation for visiting Japan at this time of the year was that it's the low season for tourism.  Starting from the flight over, where I saw many empty seats around me on the plane, I had a good feeling that I'd not see the kind of crowds that I was not all that happy to encounter at such as Todaiji's Daibutsuden and the path leading to it in Nara last October or Asakusa's Sensoji the previous fall.  And so it proved, and so much so that I must admit to thinking that, even with the snow and all, winter actually may be a great time to visit the Land of the Rising Sun after all! :)
Posted by YTSL at 11:36 PM