Expect the unexpected when it comes to Table Mountain 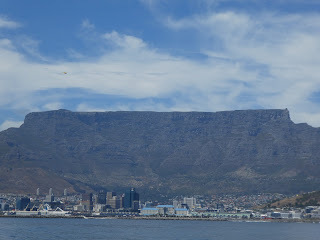 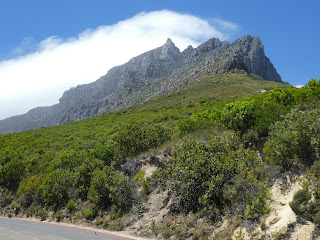 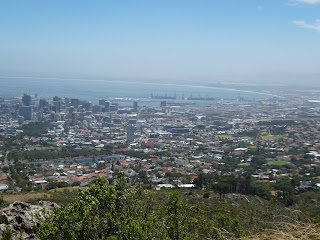 It really could have been worse.  Prior to my visit to South Africa last month, going up Table Mountain was highest on my "want to do" list along with visiting Robben Island.  But although the South African friend who had invited me to visit his country had made sure that our tickets for those two top Cape Town attractions had been bought before I even set foot in Africa again after an absence of more than 20 years, conspired against my getting to go up that 1,085-meter-high flat-topped mountain -- and not once but twice, in fact!

The first day that I was due to head up Table Mountain -- on its aerial cableway, rather than what would have been a pretty time-consuming as well as demanding hike -- it turned so windy that the cable car ride had to be closed (despite supposedly being equipped to deal with pretty windy conditions)!  Since this was early on in my South Africa trip, I didn't feel too down as I figured I'd have another chance to go up the mountain.  But the next time I tried to ride that aerial cableway again, the winds were blowing even harder: with their strength being reported as being near gale-force and causing even long-time Capetonians to think that it all was actually quite a big deal.
Seeing that I was feeling pretty downcast (since the second time that I tried to go up Table Mountain was on my last full day in South Africa), my South African friend and his mother (who also has become my friend) decided that, as consolation, they'd drive me up as far as the Lower Cable Station that's already over 300 meters above sea level.  Upon getting up there that morning, we found the conditions to be so windy that my friend and his mother felt obliged to hold on to each other while walking along the path from the car parking area to the Lower Cable Station, I actually felt a real need to hold on to a rope stretched out along part of the path, for fear of being blown away, and all of us reported the windy conditions to have caused our eyes to water!
As I told them once we were safely back in the car, at least now I could say that I had been on Table Mountain, even if I couldn't truthfully say that I had been on the top of it.  And we laughed at our struggles to walk even just a few meters in the near gale-force conditions that were windier than any I've encountered in Hong Kong (even when a direct hit by a typhoon has been recorded!) and my story of how, when trying to take a photo of a fynbos plant near the edge of a cliff, I felt that I was in grave danger of being blown off the mountain.
But that joke doesn't seem so funny now in the wake of the news that this past Monday, a Hong Kong woman and her local guide fell off the mountain and died in a climbing accident that also left the third member of the climbing party -- a second Hong Kong woman -- injured.  Something worth pondering amidst all this is the revelation that, for all of its being a good deal shorter, Table Mountain can be deadlier than Mount Everest; with some of the deaths being the result of people taking selfies in the wrong place rather than the more expected hiking or climbing accidents.
On several occasions now, I've seen people doing such as ignoring "do not enter" to go perilously close to the edge of cliffs and such in order to take photos -- and it is true that the majority of these photos are "selfies".  I also get to wondering why those people are so reckless.  And for the record: when I felt myself having problems fighting against the wind while trying to snap a photo of the fynbos plant, I did abandon my attempts to do so.  For while I do love taking photos (and did think that fynbos plant was really eye-catching), I really do prefer to err in favor of safety, believing that other opportunities will present themselves that are pretty good even if not exactly the same as the one you choose to forego for another day!
Posted by YTSL at 11:07 PM

That is one very big piece of imposing rock even being seen on Google Earth.

I've never tried looking at Table Mountain using Google Earth but can assure you that it's pretty imposing looking in real life too! ;b