My efforts to get dietary diversity in South Africa, where meat is king! 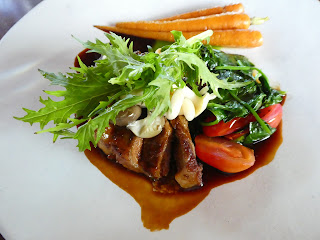 Probably the most balanced single dish I ate in South Africa! 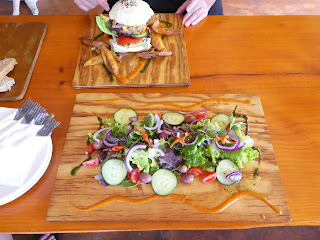 Strange as it may seem to (most) South Africans,
I actually generally prefer salads to burgers!! 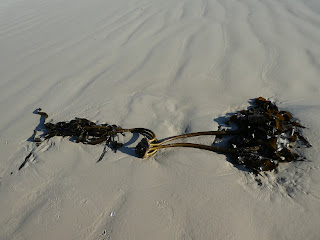 Stranger still to them is the notion that this seaweed is
actually edible, and can be deliciously so at that! ;D
Years ago when I was living in Tanzania, I attended a talk at the National Museum of Dar es Salaam given by a marine biologist friend, during which he told the audience that there was "free protein" on the area beaches, only to see them react with absolute horror upon their realizing that he was suggesting that people pick and eat the cockles found in the sand.  And further shocks ensued when the speaker pointed out that I had eaten cockles and I not only backed his claim but also told the people present that I enjoyed eating boiled cockles dipped in chili sauce.
Fast forward to my recent South African sojourn and my suggesting on more than one occasion to various local folks that the seaweed that was floating about in the ocean and washing ashore onto their beaches was not only edible but, actually, pretty delicious.  As with the Tanzanians and their reaction to the idea of cockles being an enjoyable delicacy, the South Africans I told about kombu were pretty skeptical about its being edible.  What's more, as my South African friend had warned me in advance, his countrymen and -women aren't big fans of seafood.  Hence my ending up having only one seafood meal in my more than one week there; and this despite the likes of oysters, abalone and yellowtail being found in the waters of South Africa!
Similarly, despite the locally grown vegetables I tasted there being of generally high quality (with the onions and carrots being sweeter than those from pretty much every country I know bar for Japan), many a South African just don't eat as many vegetables as you'd think they would (and should)!  Instead, the culinary focus is very much on meat, particularly beef -- though I also did have the opportunity to try springbok meat at lunch one day and lamb chops were on offer along with (beef) steaks and boerewors at a couple of braai!
Although I do like eating meat,  I also do like eating vegetables a lot -- and make a point to consume at least four different types of vegetables and/or fruits daily as I think it helps make my diet more balanced.  Normally, this hasn't been much of a problem.  But it actually was turning out to be so in South Africa, particularly since for dietary purposes, I consider potatoes as carbs rather than vegetables of the kind that I think I should make sure I eat daily.
So desperate was I to make sure that I had sufficient vegetable intake (and worried that I wasn't having a balanced diet) while there that I started ordering vegetarian dishes as mains at various meals near the end of my South Africa trip!  Thus it was that I found myself ordering a large garden salad while every other member of my party ordered burgers and chips at lunch one day, ordering a dish consisting of flatbread topped with cheese, tomatoes, onions and coriander on another occasion while my South African friend opted once more for a burger and chips, and -- well, I trust you get the picture.

The heights of hilarious ludicruousness was reached one evening when I made a point to get a large onion to be grilled at a braai along with a large and diverse amount of meats.  Apparently, this was the first time the assembled South Africans -- all of them fully mature adults -- had ever witnessed something that was not meat being grilled at a braai!  While I expected to consume the entire grilled onion by myself, curiosity got the better of a few of the South Africans.  Even more unexpected was their actually liking the taste -- so much so that a couple of them have now taken to including onions among their braai essentials and even sent me photographic proof of this being so some days after my return to Hong Kong! :D
Posted by YTSL at 11:59 PM

Intrigued! What does springbok taste like? Deer? Or perhaps mutton?

Springbok tasted distinctly "gamey" to me but also struck me as being pretty lean. I guess it makes sense: they are wild animals that are noted for their running, right? ;b