I won't lie: Among the things I looked forward to doing in South Africa ahead of my visit there was my drinking some more Castle Milk Stout, a very palatable beer brewed by South Africa's largest brewing company, whose parent company -- horror of horrors -- also oversees the brewing of the world's worst beer.  However, the beer geek mother of the South African friend whose Master's Degree ceremony I attended one super hot day at Stellenbosch University decided that, while I was in her part of the world, I should also sample a few South African craft beers.  So not only did she drive me (and her sons) over to the Stellenbosch Brewing Company for some brewskis after the degree ceremony but I was told that she had planned a craft brewery tour the next day!

In all honesty, I'd have been pretty happy with a beer equivalent of the wine tours I had been accorded on two previous days.  As it turned out though, what I also got was a tour through some incredibly scenic sections of the Western Cape that included a drive along Sir Lowry's Pass, a mountain pass that goes up and over the barrier-like Hottentots Holland Mountains, and Clarence Drive, a coastal road whose beauty I actually think exceeds even that of the more famous Chapman's Peak Drive!  All told, it was a pretty epic day; one that I won't forget for a long time! :) 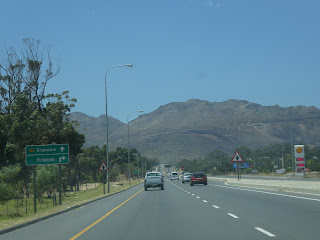 Riding shotgun in a car barrelling along the highway, with the
Hottentot Holland Mountains and Sir Lowry's Pass straight ahead 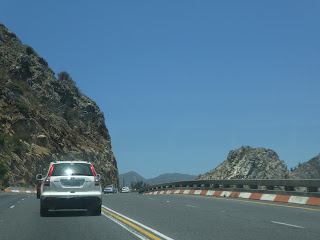 Lots of interesting geology along with blue skies
to admire while driving along on Sir Lowry's Pass :) 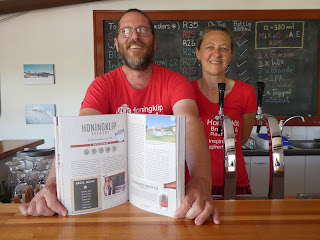 Mark and Analize ter Morshuizen smile from behind the bar at
Honingklip Brewery, their Belgian beer-inspired establishment 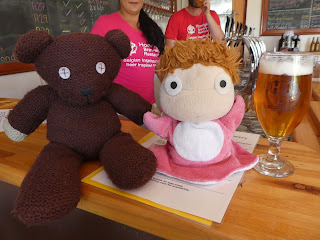 Puppet Ponyo and her old friend, South African Teddy, pose
with the glass of delicious IPA I imbibed at Honingklip Brewery :) 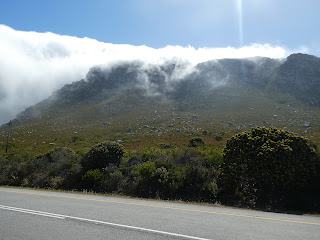 I had to get out to take a picture upon catching sight of the
clouds looking like they were cascading down the mountain... 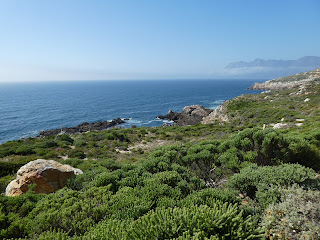 ...and I had to get out of the car again to snap photos and take
a closer look at the geology and fynbos on the seaside side of the road! 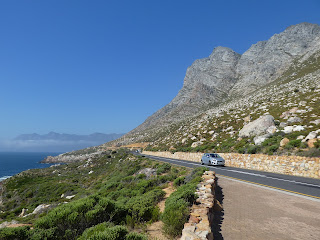 Truly, there were stunning views aplenty along Clarence Drive! 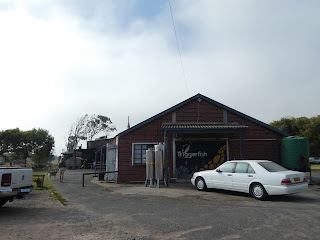 And just when I thought we had run out of surprises, we drove
into a questionable-looking area that turned out to be where
the exceptional Triggerfish Brewing microbrewery is located! :b
Posted by YTSL at 11:47 PM

"wet piece of the cardboard" or "Wet newspapers" are phrases also being used to describe some bad wines (red\white\sparkling alike). Bud is similar to coffee capsule\pod to me. Even bottled water is better then those. They are simply not the real McCoy.

For me, Budweiser's rough texture made it so that drinking it was like drinking glass. An awful, awful beer which gives beer a bad name! Meanwhile, all the beers I had in South Africa were good -- be they microbrews or from the big companies!