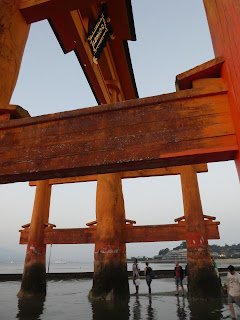 Did you know you can get this close to
the great Torii of Itsukushima Shrine?! :O 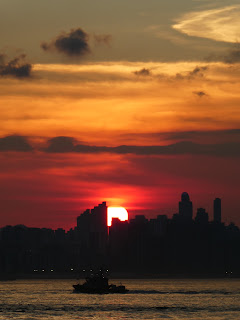 One of many sunsets I enjoyed photographing from
my new favorite sunset photography spot in Hong Kong :)


I did a lot of travelling outside of Hong Kong in 2017.  I made three trips back to Penang and made one more visit to Japan this past year.  I also visited Indonesia and South Africa for the first time ever in 2017.  Oh, and I spent the better part of a day in Macau last year too.  I guess it stands to reason then that many of the highlights of my 2017 involved experiences that occured outside of the Big Lychee.

1) Best book: As a lover of crime novels, I'm no stranger to being transfixed by a veritable page-turner that causes me to stay awake far beyond my supposed bedtime.  But it's far less often that a non-fiction work will feel so hard to put down that it will literally cause me to lose sleep.  Trevor Noah's Born a Crime is that one of those very rare works.  The absolutely gripping story of his childhood and coming of age in South Africa, it also is a wonderfully loving tribute to his mother.  Parts of it made me laugh (as one might expect of a book written by a famous comedian) but other parts made me cry and touched me so very much.

2) Best concert: Last September, I heard and saw the very talented pianist, Yuja Wang, performing live with the Hong Kong Philharmonic Orchestra.  I also was in the audience for the orchestra's very fun Musical Ping Pong concert in June.  But my absolute favorite concert that I got to attend in 2017 took place earlier still in the year and featured another bravura performance by my favorite classical musician for some years now, violinist Ning Feng.  Amazingly, I managed to get two front row seats for a friend and myself for the Hong Kong Philharmonic Orchestra's Jaap & Ning Feng concert in April and had an unimpeded view of the guest soloist at work that left me in absolute awe of his nimble figures and absolute mastery of his instrument of choice.

3) Best drive: Very early on during my visit to South Africa, I got to realizing that it is a jaw-droppingly beautiful land.  My first full day in the country began with a visit to a stunning beach and included a scenic car ride along Chapman's Drive that had me "oo-ing" and "aah-ing" for much of the way.  Amazingly though, a few days later, I was driven along another stretch of coastal road that I actually think offered up far more stunning views.  And yes, I thank my lucky stars that I was in a passenger seat when we went along Clarence Drive because that way, I really got to admire the spectacular scenery that kept on revealing itself in front of as well as on either side of the car I was in for miles and miles!

4) Best exhibition: Most of Macau's visitors go their to gamble at its casinos.  I, on the other hand, am more likely to spend time there wandering around its historic center and sampling its very culinary offerings.  This past year though, the primary attraction for me in Macau was Our Sanrio Times, a mega-exhibition geared towards fans of Hello Kitty and other luminaries in the Sanrio stable, including my first Sanrio love, Winkipinki -- and anyone who doubts that I was genuinely thrilled by what I saw there really should have been there to hear the excited squeals that inadvertently emanated from me more than once over the course of the two hours or so that I spent at this kawaii event!

5) Best film: I viewed 71 new films for the first time in 2017 but the highpoint of my movie-going year actually involved viewing a 1954 film that I saw for the first time as an undergraduate at Beloit College.  I knew the first time I saw it that Akira Kurosawa's Seven Samurai was a bona fide classic but I feel that I actually appreciate and love it so much more on my second viewing: decades later and on a much bigger screen than previously.  Put it another way: this epic work doesn't seem to only have stood the test of time but its greatness may become more apparent the older it is -- or the older and more mature its viewer becomes!

6) Best hike: Not counting the mini-hikes to and out of Cheung Chau's Tung Wan Tsai (Coral Beach) as part of my monthly beach clean-up efforts, I went on a total of 24 hikes last year in Hong Kong.  Of these, my favorite has to be that undertaken one beautiful day in April and involving my going along a trail that I hitherto hadn't realized existed, part of which was on an old military road way up in the northern New Territories.  Seeing that part of the route had my group passing through a section marked off in the relevant Countryside Map as a firing range, it seems like we were dicing with danger that afternoon!  So I'm not sure if I should or will venture to -- and through -- that scenic area again but, if truth be told, I'm glad to have done so at least once now!

7) Best place to be at high and low tide: For my first ever visit to Japan's sacred island of Miyajima, I made sure to be at Itsukushima Shrine when high tide came along and was duly rewarded with some pretty incredible sights.  Without really planning to, I also happened to be in the area when the tide was so low that I was able to walk up to the shrine's great Torii, observe that there were oysters on it and actually touch it with my hands.  In doing so, I felt blessed for the second time that day; with the first having been at high tide when I totally "got" why Miyajima has long been ranked among the top three scenic places of Japan (nihon sankei).

8) Best place for Golden Hour and sunset photography: Back in May 2015, I visited Matsue and found that sunset photography is a major thing there.  Inspired by what I saw there, I actively sought out prime sunset photography spots in Hong Kong upon my return -- and found a couple over on the western side of Hong Kong Island.  Still, while the Sai Wan Swimming Shed and Kennedy Town's Western District Public Cargo Area (aka Instagram Pier) certainly do have their fans, my personal favorite actually is further to the east: over at Lei Yue Mun, particularly in the vicinity of its Tin Hau Temple; with the photos I've taken there, particularly one hot June day last year, showing why this is.
9) Best museum: The Osaka Museum of History was never high on my list of museums to visit in Japan.  Neither was it high on my list of Osaka attractions to check out.  But one super rainy day in Osaka last October, I decided to head over to that not particularly famous museological establishment and came away completely bowled over by the artistry of its exhibit designers and creativity of its curators in fashioning beautiful and interesting exhibits despite not having all that many ancient and historical artefacts to work with and display.  Highly recommended as a place to visit even on fine weather days, it truly is a museophile's delight!

10) Best UNESCO World Heritage Site: I visited seven UNESCO World Heritage Sites in four different countries in 2017.  Japan's Itsukushima Shrine was pretty amazing and a visit to the Hiroshima Peace Memorial can't be anything but a seriously moving experience, as is a visit to South Africa's Robben Island.  Meanwhile, it says a lot that I always feel like I find something new to admire whenever I visit Macau's Historic Center -- and I will always feel a special connection with George Town because, well, it's my home state's capital city!  Still, it's the Indonesian UNESCO World Heritage sites of Prambanan and Borobudur which really took my breath away -- and the ancient Buddhist monument of Borobudur where I happily spent several hours, including ones that were early enough in the day for me to see the sunrise from what felt at the time like the top of the world! :)
Posted by YTSL at 11:59 PM

Couldn't agree more about "Seven Samurai"--if I see another 1000 movies in my lifetime it would still be in the top five of all time. Have seen in three times on the big screen, the most recent several years ago at an art museum screening and quite a few times on video. Kurosawa will be hailed as a genius for as long as celluloid (or pixels) exist.

Wow re your having seen "Seven Samurai" three times on a big screen! In 2017, I actually saw five Akira Kurosawa films on a big screen -- four of them for the first time. Loved "The Hidden Fortress" and "High and Low". I think they'd rank up there with "Seven Samurai", "No Regrets for Our Youth", "Dersu Uzala", "Sanshiro Sugata", "Ran" (the very first Akira Kurosawa film I saw, by the way; back when I was in high school!) and "Rhapsody in August" for me.