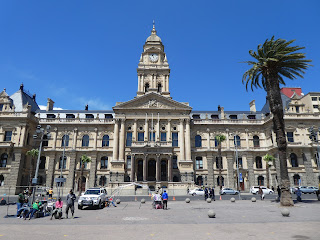 Cape Town's City Hall, from whose balcony Nelson Mandela addressed
the world after his release from prison on February 11th, 1990 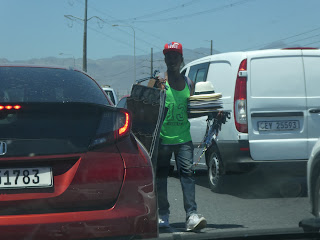 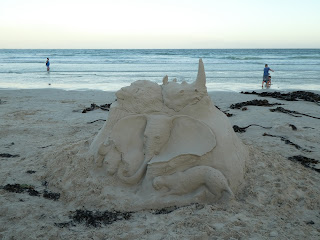 The closest I came to seeing big game in South Africa --
in the form of a sand sculpture on a beach strewn with kombu!

1) They weren't kidding when they described South Africa as the rainbow nation.  What I mean by this is that, in the few days that I was in that country, I saw and interacted with South Africans who can easily identified as Africans (i.e., "black"-skinned individuals) but also their fellow citizens with distinctly paler skin, whose ancestors hail from Europe, South Asia and Southeast Asia, and still others whose ancestors are a combination of the afore-mentioned peoples.

2) Some four years after he passed away, Nelson Mandela still looms large in South Africa.  It's not just that his portrait is on the country's Rand notes or even that there are buildings with his name or gigantic posters with his face on them.  It's not even that, despite not being a native of Cape Town, there are so many places in the area (like its City Hall or nearby Robben Island) where he is known to have left an imprint.  Rather, there is a distinct sense that, without Madiba, South Africa might not (still) be one country, never mind one that is no longer a pariah in the world.

3) Apartheid may have officially come to an end in 1991 but the country is still very much segregated, albeit officially via economic rather than "racial" lines.  In Cape Town and its surroundings, it appeared to be so that the well-off were largely "white" while the impoverished, including those who were visibly homeless and beggars, were predominantly "black".  And different areas of the city, be they historic neighborhoods, suburbs or "townships", remain identifiably "white" versus "colored" versus "black".

4) Certain sections of Cape Town/South Africa feel much more "Western" than African.  It wasn't just that I saw and encountered a predominantly "white" crowd there but that the "feel" and "vibes" of the places was so very different from the parts of Africa I previously had been in (namely, Tanzania, Kenya, Zimbabwe and Zambia) and reminded me far more of those I've felt when in the USA or Australia, if not some place in Europe!

5) Statues and other monuments to figures associated with the colonial and Apartheid eras, such as Jan Smuts and Cecil Rhodes, still remain.  With regards to the latter: I must confess that up until recently, I had mainly associated him with the Rhodes Scholarships for post-graduate study at Oxford University whose recipients have included Americans and Malaysians as well as South Africans and Australians.  As for the latter: I actually knew him best for having worked for/with Winston Churchill for the Allies during World War II!

6) Artistically, these days, it seems that South Africans very much ally themselves with the rest of the continent -- or, at least, the Sub-Saharan section.  Both at the public South African National Gallery and the private Zeitz Museum of Contemporary African Art (Zeitz MOCAA), there was no segregation of art along national lines -- or, for that matter, "racial" ones -- and I found this approach both interesting and also refreshing.

7) When I was in the country, a report came out placing South Africa dead last in terms of true literacy out of the 50 territories surveyed.  It hammered home the fact that the well-educated and articulate individuals I spent my visit with are the exception to the rule rather than in the majority.  And it made me realize how isolated and different from their fellow citizens they often must feel as a result of this (rather than "just" because of their ethnicity or economic status alone).

8) South Africa is a really big country.  World maps don't really give a sense of how large it is as much as my learning that it's the ninth largest country of the second largest continent in the world, and actually the 25th largest country in the world.  And the sense of great distance is made all the more obvious there by it taking so long to travel from A to B there by car, never mind on foot as too many of its denizens have little choice but to go on since they're too poor to own a car and the public transportation there just isn't good or widely available enough for them to rely upon.

9) South Africa has lots of natural resources.  As a child, I had learnt in school about South Africa having gold and diamond mines galore.  On my visit to the country, I also saw how much food one can get from the sea (if you chose to eat it -- though it seems that such as oysters and abalone are more likely to be exported since there are more people who love to eat them living in far away lands than in South Africa itself) and tasted vegetables so sweet that I truly am shocked that the country's denizens don't seem to enjoy eating them!

10) South Africa remains a country of so much promise and (potential) wealth.  Considering how spectacularly beautiful so much of it is, how fine its wines (and beers), etc., I'm surprised it's not as flooded by tourists as it currently is.  Also, I get the feeling that this is a country filled with people who would be able to do much if the fields in and on which they are being asked to compete were more level.  So here's hoping that they will be made to be so -- and not by things collectively going downhill but, rather, improvements being made more evenly and fairly all around.
Posted by YTSL at 10:56 PM