Two signs in South Africa that had me doing a double take! ;) 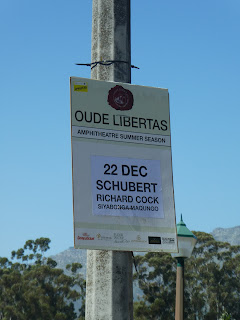 I bet this South African musician refuses to answer
to ever be called by his personal name's diminutive ;b 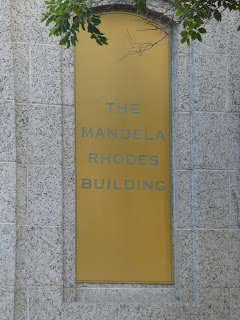 Two surnames few would ever have imagined seeing
placed next to each other not so long ago!
When I was a secondary student in Penang, Malaysia, I had a math teacher who went by the title and name of Mr. Kok.  As luck would have it, after I moved on to boarding school in England, I had a P.E. teacher listed on the faculty roll as "Miss A. Chicken".  Cue major hilarity when I told my boarding schoolmates about Mr. Kok and our thinking how absolutely funny it would have been if Miss Chicken had met and then married Mr. Kok!
Looking back, it's pretty amazing that my schoolmates both in Malaysia and England and I never associated the name Kok with anything dirty but, instead, fixated on it sounding a lot like a domestic male bird.  In contrast, when I first heard about a South African musician by the name of Richard Cock, I have to admit to thinking immediately of the dirty word that also is the dimunitive form of his first name and which his surname also can be used to mean!
And, actually, my very first reaction was to reckon that the friend who told me about there being a man by that name was pulling my leg -- only for me to get concrete proof of Mr. Cock's existence by way of our a sign posted up by the road that we were driving along announcing a concert in which he would feature while in Stellenbosch.
Another sign I spotted in South Africa that had me doing a double take, albeit for very different reasons, was that which adorns the Mandela Rhodes Building.  Think about it: Nelson Mandela and Cecil Rhodes not only lived in different eras but represent such different political philosophies and ideals, with one being a commited imperialist and the other being pretty much the opposite!
At the same time though, they both were South Africans.  And it's pretty interesting to discover that the Mandela Rhodes Building -- which was built in 1902 -- was known as Rhodes House up until 2002, when it was gifted by its owners (De Beers) to the Mandela Rhodes Foundation which has its offices in this historical building.
Co-established by the Nelson Mandela Foundation and the Rhodes Trust, the Mandela Rhodes Foundation awards scholarships to African students for post-graduate studies in universities in South Africa.  So, rather than it being a joke, the intertwining of the name Mandela and Rhodes in this existence actually turns out to stand for something very cool indeed! :)
Posted by YTSL at 10:55 PM