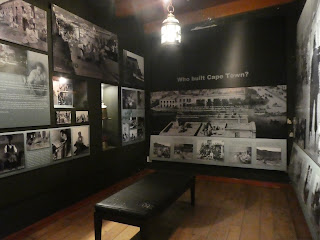 One of the exhibit spaces in Cape Town's Bo-Kaap Museum 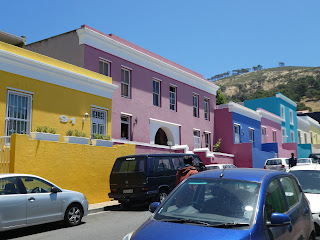 Colorful buildings abound in the Bo-Kaap section of Cape Town 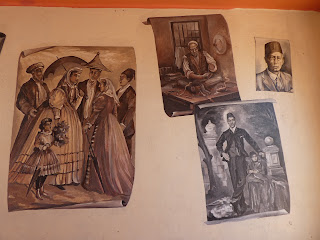 Part of a mural in Bo-Kaap which pays tribute to the area residents,
and their historical and cultural heritage
On my first full day in South Africa, I caught sight of the colorful section of Cape Town known as Bo-Kaap while being driven through the city.  But it wasn't until my final full day in the country that I went for a walk in that area -- and other parts of town -- with my South African friend.
Formerly known as the Malay Quarter, this former township is most strongly associated with the South African people who have been variously known over the years as Cape Malays or Cape Muslims.  Tracing their ancestry to the indigeneous populace of maritime Southeast Asia (particularly the parts colonized by the Dutch East India Company that are now known as the independent country of Indonesia) who were brought to this part of the world as political prisoners or slaves, they also are the product of inter-"racial" marriages with such as native Africans.
In addition to strolling along the streets and admiring the colorful houses and commercial buildings (one of which looked like it was a tribute both to Piet Mondrian as well as traditional Bo-Kaap design culture), we also spent time in the Bo-Kaap Museum housed in the 18th century building that is the oldest house in the area that's still in its original form.  Although it's one of the smallest museums that I've ever been to, I consider it worth visiting because it's chockful of information, including on who built Cape Town, and I thought the videos shown in a space made up to look and feel like someone's living room (complete with sofas to sit on), are very much worth watching.
Something that really struck me when watching those videos were how some of the Bo-Kaap residents interviewed really looked to me like Malaysian and Indonesian Malays.  In particular, a pair of elderly twin brothers -- both of them retired headmasters! -- reminded me so much of a middle-aged Malay friend of mine who I look forward to meeting up with whenever I return to Penang (and who, as it so happens, is the son of a headmaster)!  Linguistic connections also abounded for me, with this Malay speaker being able to comprehend that a respected area resident's "Tuan Guru" title meants "Head Teacher" and finding it fascinating that the Bo-Kaap's Muslim Cemetery is called Tana Baru (very similar to the Malay "Tanah Baru", which means New Ground").
More than incidentally, the Cape Malays/Muslims are part of the section of the population known in South Africa as "Coloureds" (to this day).  And until I started researching in earnest ahead of this recent South Africa visit, I hadn't realized that the "Coloureds" are the largest ethnic/"racial" group in Cape Town -- making up 44.6 percent of the population of the "Mother City" to "Whites"'s 32.3 percent and Black Africans' 15.8 percent.

On the subject of "Coloured" South Africans: while he's not a Cape Malay/Muslim/Coloured, the popular comedian-political commentator, Trevor Noah, is considered a "Coloured" in his home country (but "black" in the United States of America, where he now hosts The Daily Show with Trevor Noah).  And as it so happens, I picked up a copy of his autobiographical Born a Crime: Stories from a South African Childhood at a bookstore before I left the country and that immensely enthralling tome was the first book I read (from cover to cover in less than a week too!) upon returning to Hong Kong... :b
Posted by YTSL at 11:22 PM