"Did you go on safari?", an American friend asked me after he learnt that I had been in South Africa recently.  Since that's the Kiswahili word for "trip" or "journey", I technically had been -- but I knew what my friend actually was asking was whether I had gone on tour to see wild animals such as lions and elephants, so I answered in the negative.

If anything, the closest I had been to visiting a place where wild animals are to be found was the local pond in Durbanville, a suburb of Cape Town where I spent a few days and nights since it's where my South African friend grew up and his mother still lives.  On my final morning in South Africa, we headed over to that idyllic space where a variety of birds make their home.

At the same time though, there were three sites where I made wild creature spottings that I considered quite a bit more exciting: the waterfront by Kalky's, where I spotted a sea lion; the stretch of garden by my South African friends' maternal grandparents' house, where I spotted a flock of exotic looking guinea fowl; and, improbably, Robben Island, best known as a prison island but also home to penguins(!) and some 130 other species of birds! 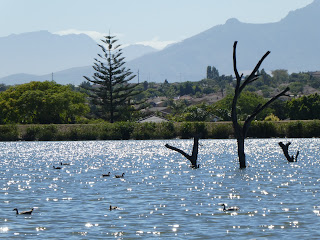 The kind of idyllic place many people would like
to have in their neighborhood :) 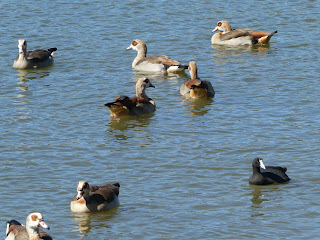 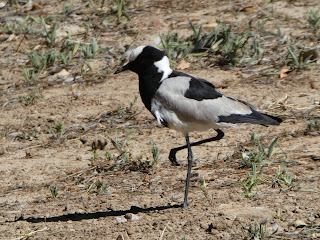 A bird whose long, thin legs I found particularly interesting 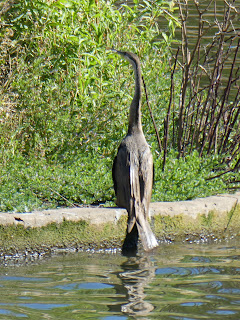 On the other hand, it was this bird's long neck
and thin body which intrigued! ;b 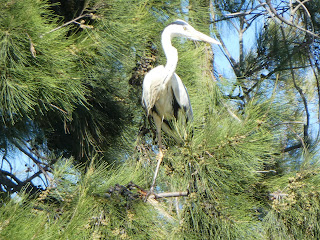 I've seen relatives of this heron over in various parts of
the Big Lychee and Japan as well as Amsterdam! 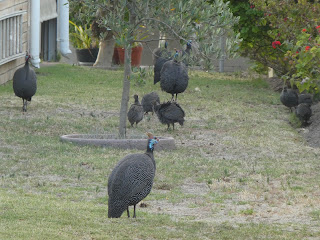 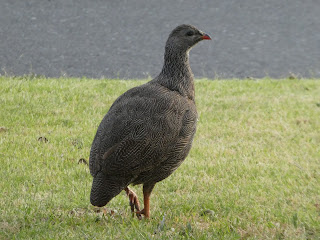 Aren't the patterns on this bird's feathers pretty? 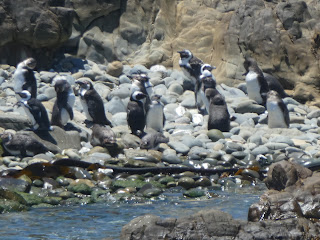 Ultimately though, nothing can beat the sight of penguins
in the wild as far as I am concerned! :)
Posted by YTSL at 6:13 PM

"A bird whose long, thin legs" <---- that seems to be a some sort of a wetlanbd-wader bird. I'll try to look it up later. Might take a while.

Take your time but I appreciate any effort to ID the as-yet-identified birds in the post! :)

Googled using the text string 'South Africa wader bird' over lunch break and found this blog "http://www.wildlifeinsight.com/a-south-african-wildlife-holiday/paarl-bird-sanctuary-south-africa/". The individual at the first photo at the wading bird section seems look very much alike to your discovery. That would seemed to be a blacksmith lapwing (https://www.google.com.hk/url?sa=t&rct=j&q=&esrc=s&source=web&cd=1&cad=rja&uact=8&ved=0ahUKEwjVoOGn8tvYAhUNRN8KHWfHAL8QFggnMAA&url=https%3A%2F%2Fen.wikipedia.org%2Fwiki%2FBlacksmith_lapwing&usg=AOvVaw2a7eAnd4ESQXGAz3Y6Vffz)

That's a new one for me.

Look's like we have some in captive environment at the Zoological & Botanical Gardens (https://www.lcsd.gov.hk/en/parks/hkzbg/animals/birds.html)

Thanks for the blacksmith lapwing ID! :)

I've always felt that it is a privilige to view wildlife, especially birds, because they often possess a natural grace and poise that humans can only hint at. You've assembled some memorable bird photo-portraits here that illustrate my point.

The bird in the third photo from the top has a charming stately gait. Below this, the bird with the long neck is caught in such a memorable natural pose...Below this, the elegant profile of the heron-looking bird paused on a tree limb...Second photo from the bottom, depicts a fowl with a woven feathered cloak befitting royalty...Oh, and the top photo of ducks in water near to a partiallly submerged bare tree, has a Japanese simplicity about it...This entry depicts what must have been a day to remember.

Thanks for your appreciation of my bird pics. It really would have been a day to remember if I had taken all of them over the course of a single day. Actually, they were taken on three separate days and locales, albeit of them within South Africa and over the course of my short visit to that country! ;b