What a Wonderful Family! is yet another wonderful film by Yoji Yamada (film review) 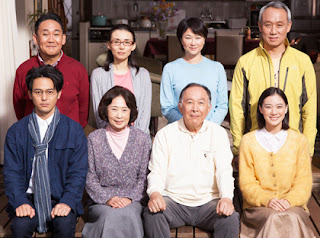 
Octogenarian auteur Yoji Yamada has directed more than 80 films over the course of his life.  Some of them, like the Oscar-nominated The Twilight Samurai (2002) , have garnered international acclaim.  But locally, this filmmaking great remains best known for having directed 46 out of the 48 "Tora-san" films made between 1969 and 1985.  Revolving around a kind-hearted travelling salesman known as Tora-san, the much-love series' official Japanese title, Otoko wa Tsurai-yo, translates into English as "It's Tough Being a Man".  And Yoji Yamada's latest film references it with its Japanese title actually meaning "It's Tough Being a Family" in English rather than the more upbeat sounding What a Wonderful Family! by which it goes by internationally.


Other connections between this drama-comedy about a family which threatens to fall apart after its matriach tells her husband that she wants a divorce and previous Yoji Yamada films include pretty much its entire cast having previously appeared together in Tokyo Family (2013), his respectful remake of Yasujiro Ozu's Tokyo Story (1953); which, at one point, What a Wonderful Family!'s patriarch is shown watching on television!  In addition, those familiar with this auteur's body of work will see many of his trademark touches in this entertaining offering, including an amusing affinity for inserting physical humor (including pratfalls) into more than one scene which many another filmmaker would be inclined to treat with greater gravity.


In more conventional hands, Shuzo Hirata (Isao Hashizume) would easily be a more one-dimensional family patriarch.  An old-fashioned husband, father and grandfather enjoying his retirement after decades of working hard as a salaryman, he seems happiest when hanging out with his buddies -- or even by himself -- at a bar operated by the charming Kayo (played by Jun Fubuki, whose Tokyo Family character also was named Kayo!) rather than when in his physically comfortable family home where he resides with his wife Tomiko (Kazuko Yoshiyuki), elder son Konosuke (Masahiko Nishimura), housewife daughter-in-law Fumie (Yui Natsukawa), their two school-age sons (Takanosuke Nakamura and Ayumu Maruyama), and his younger son Shota (Satoshi Tsumabaki).


Like with Tokyo Family, Yoji Yamada depicts a middle-class Japanese family where the tradition and the modern (and even post-modern) meet but also sometimes clash in this Shochiku production.  For example, Konosuke may be a salaryman like his father was but sensitive Shota has pursued a more unconventional career as a piano tuner -- and his adorable nurse beloved, Noriko (Yu Aoi, who also played an angelic character named Noriko in Tokyo Family, as did Setuko Hara in Tokyo Story), doesn't come across as the type who'd ditch her career to become a full-time housewife post marriage.  In addition, it's pretty obvious that daughter Shigeko (Tomoko Nakajima) is generally the more dominant partner -- domestically and also at their family accounting firm -- rather than her Funassyi key-chain-owning husband, Taizo (Shozo Hayashiya)!


Although its storyline and topical focus makes the film sound like it'd be a serious affair, What a Wonderful Family! mixes in so much comedy into the picture -- like Yoji Yamada's About Her Brother (2010), which itself was a homage to Kon Ichikawa's darker Her Brother (1960) -- that it's got far more moments that will have you laughing out loud than wiping tears away.  And interestingly, considering that we've got the elderly director of such as sentimental weepie supreme The Yellow Handkerchief (1977) at the helm of this production, this enjoyable movie is actually more clear-eyed and forward-thinking about such matters as what many a contemporary (Japanese) spouse seeks in -- and finds annoying about -- their partner than one might expect.


Something else that makes me feel favorably inclined towards What a Wonderful Family! is how, like with many of my favorite films from the Land of the Rising Sun (including Yazujiro Ozu's Late Autumn, Hayao Miyazaki's My Neighbor Totoro, and Hirokazu Kore-eda's Our Little Sister), its creators are able to work dramatic tension into the picture without needing to turn any character into a villain.  This very watchable offering may be less edgy as a result but it generates a lot more goodwill, and has audience members like yours truly coming away with a warm feeling and sense that the world indeed can be a tough place at times but there's still much good out there actually. :)
My rating for this film: 8.5
Posted by YTSL at 10:03 PM