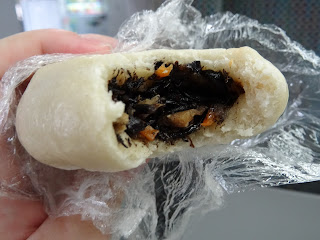 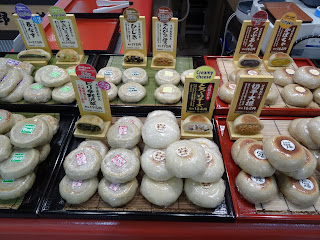 Like onigiri, oyaki have a variety of fillings :b
An American friend of mine who had recently been in Japan told me of how she had "over-dosed" on onigiri when in the Land of the Rising Sun whereas our mutual Japanese friend who she was travelling about with over there never seemed to tire of the rice balls and could easily eat as many as four of them over the course of a single long distance train ride.
While I'm a fan of onigiri myself (and tend to also opt for them as my "go to" food on train rides and frequently too for breakfast when I'm in Japan), I could see how eating rice balls -- even ones with a variety of fillings (including ones as diverse as ikura (salmon roe), natto (fermented soybeans) and ume (plum paste)) -- every day on a holiday could get old after a while.  So I was pretty happy to be able to try out a portable food alternative to them that's specific to Nagano prefecture on my recent Japan trip!
With a texture and shape somewhere between a Chinese steamed bao and a fried Japanese gyoza, oyaki are dumpling-bun thingies whose dough is made from buckwheat -- like the handmade soba that the area is known for, and also the seriously delicious as well as surprisingly filling galette I had at an eatery called Donguri House over by Togakushi's beautiful Kagami-ike!  And while these rustic delicacies may not look all that stunning, trust me when I say that I could happily eat quite a lot (more) of them if I had spent more time in Nagano prefecture!
As it turned out, I "only" had some oyaki on three occasions during the four and a half days or so that I was in the part of Japan with which it's associated.  And for the record: two of these were when I was on a train while the third was at a roadside stall when I was in the middle of sightseeing and wanted a quick rather than leisurely and/or super large lunch.
Although I've seen oyaki filled with red bean and even cream cheese, I tended to go for those sometimes steamed, sometimes baked affairs with more traditional savory fillings such as hijiki seaweed, kinpira gobo and spicy nozawana (pickled green vegetables).  And while I'm definitely am an omnivore who loves seafood (especially sushi) and also a variety of meats (including pork, goose, mutton and beef), here's pointing out that I really do appreciate getting to include a variety of vegetables in my diet whenever I'm in Japan -- as well as being able to try a variety of often very local regional specialties! :)
Posted by YTSL at 11:42 PM

I'm not sure if I've ever had that before.

Unless you've been to Nagano prefecture, I doubt that you've had oyaki. They're one of those interesting region-specific regional foods I like trying out in Japan -- and in this case, I think they're really tasty!

I have never had oyaki but they look good.

As for onigiri they were my only breakfast choice the first time I was in Japan (due to budget concerns) and I got so so so so sick of them that I don't even look at them in kombinis anymore (neither in Japan nor in Korea).

I haven't eaten enough onigiri to tire of them. But I must admit to thinking I had had too much soba when I was in Matsue. Even on this trip, I ended up having soba three out of the four days that I was in Nagano Prefecture. All in all, I've come to realize that there are certain areas of Japan which are inordinately proud of their (particular) soba! ;b