On the sixth day of my recent Japan trip -- and the first morning I spent in Tokyo -- I went on a culinary pilgrimage to the Tokyo Metropolitan Central Wholesale Market at Tsukiji.  It was at this, the largest -- and busiest -- wholesale seafood market in the world, that I first caught sight of the massive heads of tunas and many different kinds of sea creatures that I previously didn't know exist, and had my first omakase sushi meal  -- which also happened to be the best sushi meal I had ever had by a long chalk up until that point in my life and that which truly ignited my passion for quality sushi (and sashimi).

Once again, I had sushi for breakfast there.  This time though, I also went about saying goodbye to Tsukiji, as the market will be moving in November to another part of Tokyo (and I don't think I'll be returning to that part of the world before its relocation).  Maybe it's my imagination (or my timing this time around) but large swathes of the place already didn't seem as busy during my most recent visit as on previous ones.

So I'm going ahead and cobbling together a Tsukiji photo-essay using photos from earlier visits as well as this most recent one; and I hope that when viewed collectively, they will help give an idea of how atmospheric this old locale (which has been operating in this particular location since 1935) is, why I find it a really fascinating place to wander around and why a visit to Tsukiji is pretty much guaranteed to make non-vegetarians hungry as well as nostalgic... :) 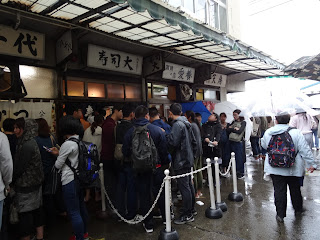 I reckon the line for Sushi Dai has gotten longer
with each passing year! :O 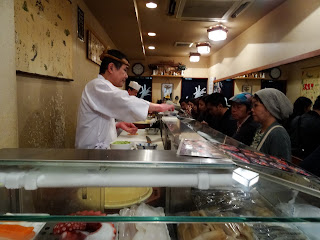 It's not yet 10.15am but plenty of people
have already decided that it's time for sushi! 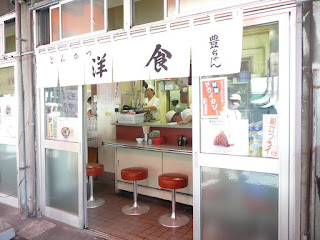 Still, it's not like every eatery at the market is
crazy busy serving customers... 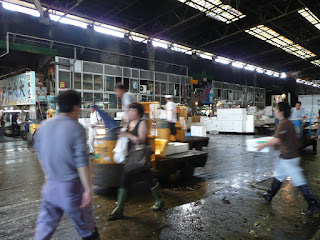 Also, quite a number of folks are still working
and generally buzzing about 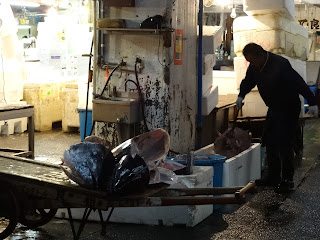 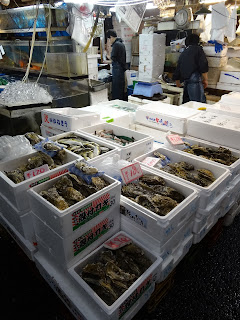 I wish I didn't feel so stuffed already post
sushi breakfast that I figured it'd be wise to
not have some fresh raw oysters for "dessert"... ;S 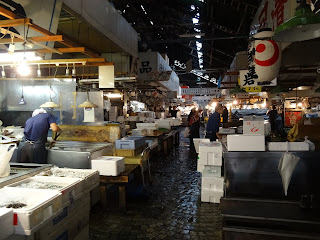 The cleaning up has begun... 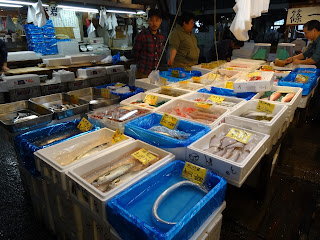