"All your favorite plushie characters are from Japan!"  That's what a friend of mine recently noted.  Believe it or not, I hadn't actually realized it until she said so.  But it's indeed true enough that Winkipinki (my first Sanrio love), Hello Kitty, Totoro, and Ponyo do indeed all hail from the Land of the Rising Sun (or, rather, their creators -- since Kitty Chan's actually supposed to be an English girl cat character!).

And so too does Funassyi, the pear fairy from Funabashi, whose existence I only got to know about in the final months of last year but whose incredible -- and often incredibly diverse -- exploits I've been addictively and vicariously following via such as the amazing We Love Funassyi blog and often hilarious Youtube appearances such as this, this, this and this!  (For those who are interested in checking out more videos featuring this shrieky yellow and blue creature, you could do worse than Google "Funassyi explosion run", with a version with English subtitles being available on Youtube!).
Although the hyper-active unofficial mascot of Funabashi (a city in Chiba prefecture with pear orchards) is super popular in Japan, it's not yet that well known internationally -- and its merchandise (still) is not all that easy to find in Hong Kong.  So even though a friend very kindly got me some Funassyi items when she visited Tokyo a few months back, I was determined to buy myself some more goodies with the Pear's visage on them when I went over to Japan myself at such as the branch of Funassyiland located on the ground floor of the wonderful flagship Kiddy Land store in Harajuku... 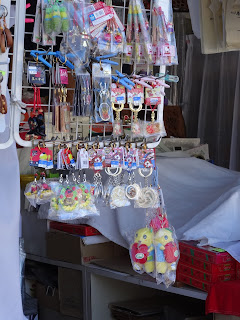 Actually, as I found out on this recent Japan trip,
the Pear -- pictured here holding an apple in Nagano --
can be seen in many places in the country! ;b 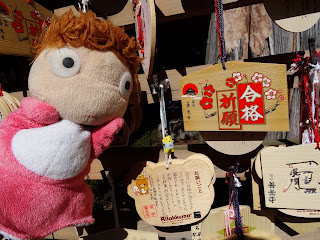 And on the very first day of my recent Japan trip, Puppet Ponyo posed
with a tiny Funassyi charm in the grounds of Nagano's Zenkoki :) 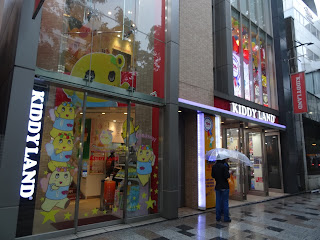 It was raining when I got to Funassyiland/Kiddy Land but
I just knew there would be things in there that'd brighten up my day :b 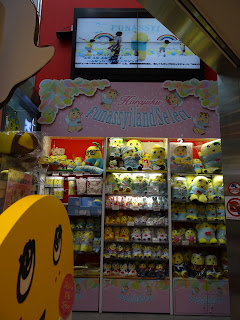 On those shelves alone are far more Funassyi merchandise
than I've seen (to date) in all of Hong Kong! 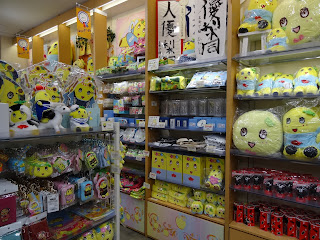 Funassyi rules!  (And with the Pear being a charitable fellow,
I wouldn't be surprised if it had allocated some of its store space
for Kumamon items to help with the Kumamoto earthquake relief) 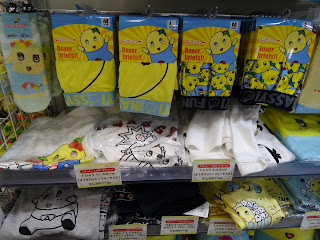 I wonder how many men out there wear Funassyi
boxer briefs... willingly and of their own volition! :D 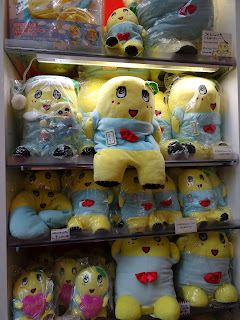 In retrospect, I really wish I had bought that 60 cm
Funassyi plush sitting on the edge of the shelf... :S 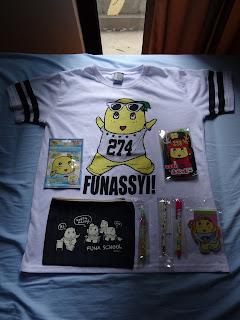 Still, I think I got a decent sized Funassyi haul
on this one trip... (Confession: that's actually not
everything I bought this time around! ;b )
Posted by YTSL at 11:52 PM

I encourage all your followers to check out Funassyi videos. The pear is amazing in its antics of jumping around, talking, and having people react. So much positive energy and fun! Even without English subtitles the pear is great.....fun to watch and how I wish I was there to squeal in delight at the pear's antics. Looks like you took home some fun Funassyi stuff too.

It can seem weird to devote time, space and thought to Funassyi when there is much more serious stuff swirling about. But you're right: it's so positive and fun, and I have to say that the Pear brightens up my days as well as generally entertains.

More than incidentally, I've read that Funassyi came into being to help cheer up people in the wake of the 2011 Tohoku earthquake. And the Pear donates considerable amounts of its earnings to charitable causes, including the earthquake relief fund.