Marching to the China Liason Office again, this time along with one of the previously missing booksellers 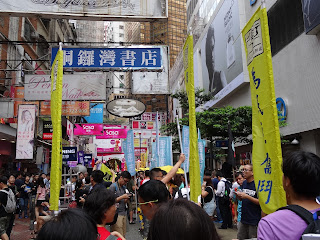 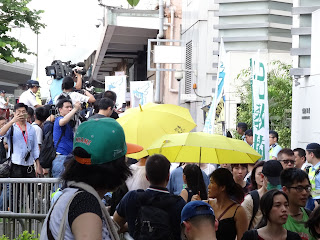 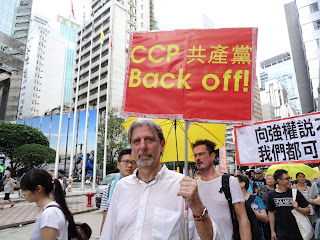 Along the way, district councillor Paul Zimmerman
delivers a message to the CCP that many of us heartily endorse


The past few weekends have seen quite a bit more rain in June than I'm used to seeing in Hong Kong.  But even while downpours have laid waste to quite a few of my hiking plans, the heavens cooperated today by having the rain stop a few minutes before the start of this afternoon's rally in support of Lam Wing Kee that was attended by thousands of protestors (a pretty good turnout considering that there was less than 24 hours notice given for the event).


At the starting point of the march over on the Causeway Bay street where Causeway Bay Books has its home, the bookstore's founder made an appearance to thank people for their support as well as deliver the message to the assembled journalists that people want to be left to live in peace in Hong Kong (as opposed to feel pressured by the Mainland Chinese authorities to do things they don't normally want to).  Lawmaker Albert Ho also spoke briefly before the two men proceeded to lead the march, which began on time and generally went rather smoothly; with our progress being halted just a few times along the way to allow road traffic to pass through.


At certain points in the afternoon, I found myself walking faster than many of the others around me.  Consequently, while I had started the march just behind those protesters holding People Power banners, I ended up also walking in the company of Civic Party representatives (including Ken Tsang and lawmaker Claudia Mo; the latter of whom was holding a placard bearing a "one country, two systems -- dead" message on it), members of the League of Social Democrats (including the easily recognizable "Long Hair" Leung Kwok Hung), supporters of the Labour Party (and lawmakers like Cyd Ho, who made an impassioned speech at the China Liason Office that asked, among other things, what law the kidnapped booksellers had actually broken) and others along the way.


At a corner in Wan Chai, some 20 representatives of pro-Beijing group Voice of Loving Hong Kong gathered to oppose this afternoon's rally.  In addition, lone individuals were spotted on one occasion each in Central and Sai Ying Pun protesting against today's protest.  However, all these counter-protesters were vastly outnumbered by those of us out there who would much rather that the Communist Chinese Party and government "back off" and let Hong Kong be; this especially when I count the number of people I saw along the way who gave those taking part in the rally the "thumbs up" sign or even vocally voice out their thank yous.


I know there are people who will ask what's the use of us marching for hours in high heat and humidity (as was the case today and each year on July 1st).  But, as ever, I consider it a privilege which shouldn't be taken for granted that we in Hong Kong can gather together to publicly voice sentiments and send messages to the authorities in Hong Kong, and audiences beyond, that certain repressive governments would consider beyond the pale and consequently never allow.  So I feel we should exercise this right while we (still) can -- and if it turns out that we can make a difference, it'd would be a boon and bonus!

In the case of the Causeway Bay booksellers: It was very heartening, and inspiring even, to read that one of the factors that had prompted Lam Wing Kee to decide to tell the truth about what had happened to him in China is his having been touched by those who had taken part in the rally for the booksellers back in January.  And even while a lot of problems remain, I do consider it very much a step in the right direction that we now know what happened to the five people who had been missing the last time I marched to the China Liason Office in Sai Ying Pun -- and that this time around, one of them was among the protesters out there on the streets of Hong Kong.
Posted by YTSL at 11:07 PM

Thank you for participating in the march! Great to hear it was 6,000 strong!

When the march began, I did think participation was on the low side but I also saw lots of people joining in at later points in the march -- including at Canal Road, in Wan Chai, etc. So by the end, I reckon the size was about the same as back in January. Like I wrote yesterday, not bad, really, considering the less than 24 hours notice -- and the amount of people I know who couldn't go because they were working, down with a cold/flu, happened to be out of Hong Kong, didn't find out about the rally until after too late, etc.!