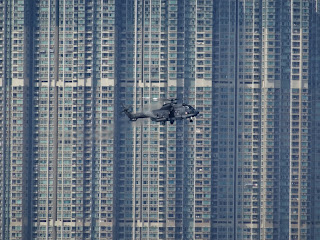 Helicopters are a fairly common sight in Hong Kong 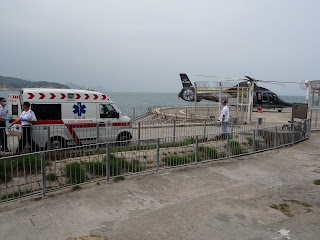 In places like Cheung Chau, they are used to transport
the sick to a hospital across the waters 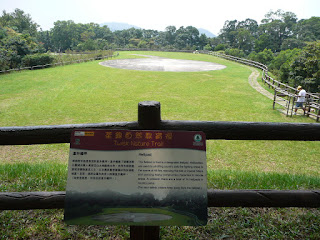 And out in the countryside, the Government Flying Service's
helicopters sometimes are called upon to do such
as help with firefighting or rescue injured (or lost) hikers!
Maybe it's my imagination but it sometimes seems like there are more helicopters flying about in Hong Kong's skies these days than, say, two or three years ago.  The politically minded -- or just plain paranoid -- might suggest that this is a sign of there being increased surveillance taking place in the Big Lychee in the wake of there being increased opposition to the authorities; and I myself have suspected just that when seeing helicopters flying overhead on July 1st.
On a lighter note: more than one person I know has pointed out the existence of a helicopter service between Hong Kong and Macau (though none of my friends have ever thought to foot out HK$4,300 for the 15 minute ride!).  In addition, the wags among them never fail to muse that chances are high that many of those going from Hong Kong to Macau by helicopter end up not having enough money -- or, at least, not being in the mood -- to return on the same expensive mode of transportation.  Conversely, it would appear to be a sure sign that someone's won big at the gambling tables if he or she elects to make the return trip from Macau in a helicopter!
It's probably the case though that the majority of helicopters seen flying about over Hong Kong are actually carrying out more prosaic but more important business.  I think here of the helicopters utilized by the Government Flying Services to do such as act as air ambulances for residents of islands like Lamma and Peng Chau which don't have a hospital on them (and even Cheung Chau, whose hospital I get the distinct feeling is neither very big nor all that super well equipped) and help with fire fighting, especially of forest fires that break out during the dry season.
There also have been times when, upon spotting a helicopter flying in the area when out hiking, my hiking buddies and I get to wondering aloud if a hiker rescue effort was being undertaken.  And unlike with the commercial helicopter rides between Hong Kong and Macau, I actually do personally know of people who needed to avail themselves of emergency helicopter rescue services while out hiking in Hong Kong's wild outdoors! ;S
Posted by YTSL at 10:50 PM

Earlier today I chopper was flying into our local hospital since we're a small community most people get shipped out.
Coffee is on

I get the feeling your community's small in number but spread out geographically -- which is why helicopters get used for emergency medical services. Is that true?