A visit to the largest wasabi farm in Japan, and probably the world! (Photo-essay)

On the fourth day of my recent Japan trip, I said farewell to Nagano and took a train to Matsumoto.  Although Matsumoto has its share of attractions, I nonetheless decided after checking into my hotel there to board another train and head over to Hotaka, a nearby town that's home to the largest wasabi farm in Japan -- and presumably also the world.

I didn't really know what to expect that the Daio Wasabi Farm -- which is 15 hectares in size and  produces 150 tons of wasabi annually -- located on the outskirts of that small rural town would be like.  As it turned out, my experience there was the wasabi equivalent to Farm Tomita, the farm over in Furano, the part of Hokaaido where lavender is king.  Alternatively put: The Daio Wasabi Farm is tourist-friendly even while being a working farm.  And while its landscape may not be as colorful as Farm Tomita's, I found it really scenic and idyllic all the same -- and enjoyed strolling about the place, snake encounter and all! ;b 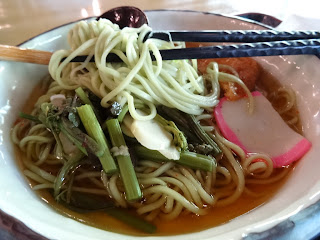 Before anything else: I decded I needed to fill my stomach
with a bowl of wasabi soba at the farm's restaurant! ;b 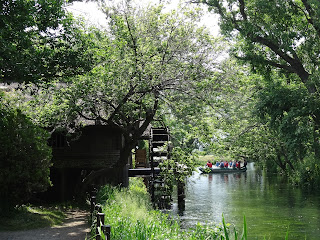 Then it was to the section of the wasabi farm which had featured
in Akira Kurosawa's Dreams (in particular, the section of
the magical realist film entitled The Village of the Waterwheels) 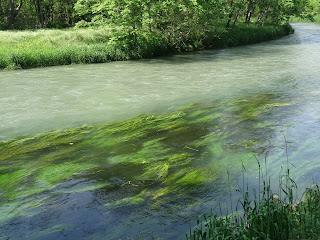 Near the waterwheels which feature in the movie, a stream with
slow moving water (and green vegetation) meets up with another
with fast moving water whose color I associate with melted glaciers 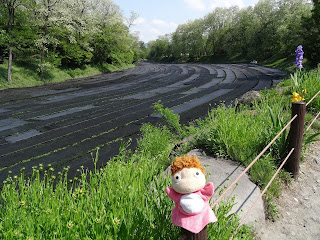 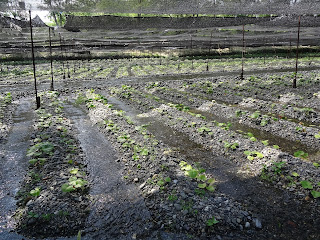 What's under all the netting -- wasabi plants planted in neat rows,
and channels of spring water on either side of them to make sure tha
the gravel beds in which the wasabi plants growing in are kept moist 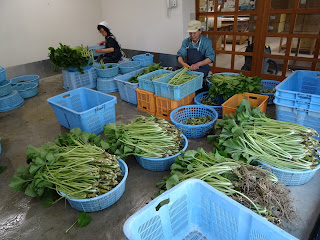 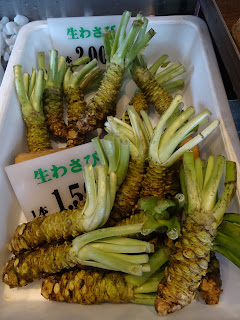 The wasabi roots which can cost a pretty penny
-- in this case, up to 2000 Yen for a choice one! 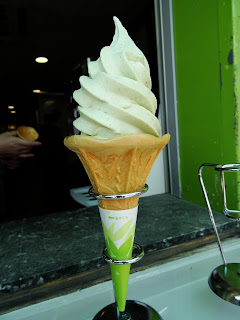 I wasn't about to try the wasabi beer or frankfurter on offer
at the farm but did try the wasabi ice cream --  which actually
was subtly sweet as well as on the slightly spicy side ;b
Posted by YTSL at 11:31 PM

Oh no, I wish I had known that earlier - we went to Matsuomoto for 24 hours, and while the castle is beautiful, we were so bored! We cursed ourselves for not booking an earlier Shinkansen to Tokyo. Had I known there was this wasabi farm, I would have gone there then sitting in a coffee shop and waiting for the time to pass and our train to arrive!

Was the castle the only place you visited in the area? I actually wish I had allocated more time to spend in Matsumoto. Ended up not having time to visit the city art museum (which, I understand, has lots of works by Matsumoto-born Yayoi Kusama)! And stay posted: there was one other cool Hotaka attraction I visited on this trip!

Well, I wasn't aware that wasabi farms even existed, but your excellent photos make me want to visit here (and your Huff Post link informs me that most restaurants don't serve true wasabi)...

Top photo of wasabi soba looks delicious (many people think buckwheat is a grain, when actually it is a fruit seed)...Second photo from top of water wheels: Constable would have loved to paint this...Third photo from top of the stream is so refreshing, and your "melted glaciers" comment makes me want to meditate while looking at this photo...Somehow, Puppet Ponyo appears older to me in her photo or maybe its just my imagination because I think of her as a veteran traveler who radiates a quality of a sage.

When Daimaru was still around their Supermarket used to import fresh Wasabi roots. These days, only the more expensive Japanese Restaurants in town would give you a small portion of ground wasabi. I had had a few encounters with these and those fresh ones, as you mentioned, as a certain kind of sweetness in it. Very difficult to describe unless one has actually tasted them though.

To make sure you don't miss it, here's a link to my other Hotaka blog post:-
http://webs-of-significance.blogspot.hk/2016/06/sights-and-sounds-at-festival-that.html

I knew about wasabi farms before I visited but have to say I didn't have a clear idea how they look until I went to Daio Wasabi Farm! And yes, most of what people get served as wasabi really isn't wasabi at all -- shocking, eh?

I am a fan of real wasabi -- and really enjoyed the wasabi soba (notice that the green veg served with the soba are parts of wasabi) and also the ice cream! Glad you like more than one of the pictures in the photo-essay. :)

Interesting re Daimaru! And whenever I get served real wasabi at a Japanese restaurant, it's a sure sign to me that it's a quality establishment -- and yes, usually expensive to boot! ;S