The striking historic castle that is Matsumoto's main attraction (Photo-essay)

There's no question that Matsumoto Castle is the city of Matsumoto's main attraction.  One of just 12 original castles remaining in Japan (and the fourth I've visited after those at Himeji, Bitchu-Takahashi and Matsue), this stellar example of a hirajiro (flatland castle) was built in 1590 on an inland plain situated approximately 600 meters above sea level and includes moats along with inter-connecting walls and gate-houses among its defensive structures.

Also known as the Crow Castle after its predominantly black exterior (whose color was chosen to strike fear in the hearts of its enemies) and because the black walls of its main keep (donjon) and towers are supposed to resemble the spreading wings of a bird, Matsumoto-jo (jo being the Japanese word for castle) is one of the most striking castles I've ever visited; rivalling Himeji's White Heron Castle for sheer beauty with regards to its exterior and also atmospheric feel in terms of its interior.

I think I also seriously lucked out in terms of the circumstances of my visit; with the castle and its grounds not being too over-run by visitors and there being brilliant blue skies, bright sunshine which put a gloss to many surfaces and high visibility that made snow-covered mountain tops located miles away look much closer than they in fact were.  And it was with great difficulty that I tore myself away from the place -- and I only finally did so after I strolled around the grounds of this castle (which I think would be fully deserving of the UNESCO World Heritage listing that it's seeking) not once but twice, determined to drink in the views in such a way that they'd be etched in my memory as well as captured by my camera. 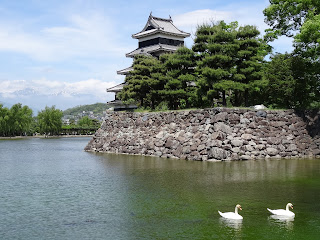 I actually gasped out loud when I first caught sight of Matsumoto-jo,
what with the view also including the snow-capped mountain range in
the background and the pair of swans swimming in the castle moat 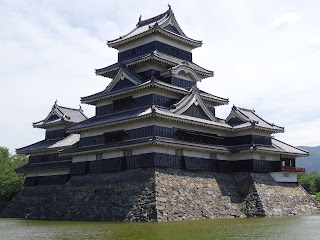 A more complete view of Japan's oldest castle donjon (main keep),
the minor keep which one enters first on a visit and
another built in peace-time for moon viewing :) 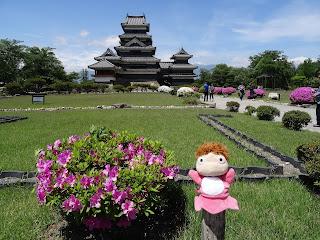 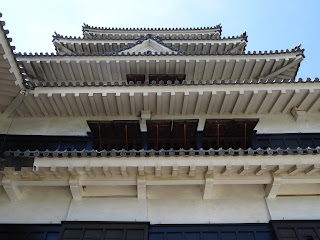 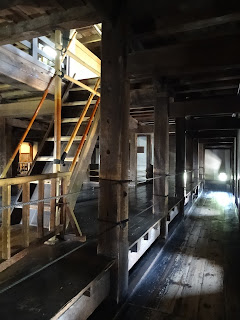 Unlike the concrete reconstructions of such as Osaka Castle,
Matsumoto Castle's donjon is the real, mainly wooden deal 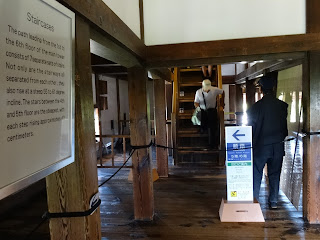 In original castle donjon, one frequently encounters
super steep staircases to climb up and down 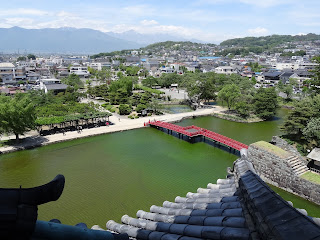 More often than not, the climb feels worth it after you gaze out
from the top of the donjon and behold views like this one :) 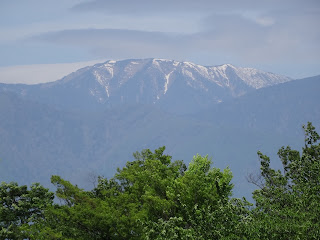 Thanks to my camera's 28x zoom, the snow-capped peaks
of some of the northern Japan Alps' highest mountains
look much closer to Matsumoto than they in fact are ;)
Posted by YTSL at 10:24 PM

Yes, Japan still has a royal (actually, imperial) family -- but especially these days, they live in palaces and villas rather than castles. And Matsumoto Castle was lived in by feudal lords rather than imperial family members.

And now that you've got me thinking, the only Japanese castle I've visited that was lived in by a royal family was Shuri Castle in Okinawa -- and that royal family didn't consider itself Japanese!

Beautiful views and interesting attractions in Matsumoto. Looks like I can go on a Japan tour on my own and not wait for my hubby.

I think Japan is one of the best -- if not the absolutely best -- place to travel by your own as a female. It's got a really low crime rate, the people are friendly, the public transportation's great, and the food portions are perfect for a single person! ;b