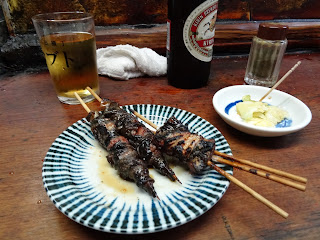 Would you eat these skewers -- especially if you know
that they consist of eel parts? ;b 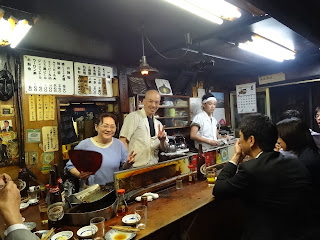 Be aware that that's all they serve at the wonderfully
atmospheric Kabuto in Shinjuku's Yomoide Okocho! :)


As I clambered onto a recently vacated stool at Kabuto, not one but two of the people behind the counter made a point to tell me that their eatery only served eel.  "I know", I told them, and also immediately put in an order for hito-tori (seven stick chef's choice course) and a bottle of birru (beer); after which broad smiles broke out on their faces.


My beer got served pretty much immediately but I had to wait a few minutes for the first skewer be placed on the small empty plate that had been put in front of me along with a smaller plate with some pickled vegetables to munch on first.  I didn't mind as this gave me time to look around and take in the atmosphere at this very small and traditional feeling place in Omoide Yokocho that also had the air of being a long-time local favorite, especially of salarymen whose offices were nearby.


As he placed the first skewer on my plate, the tall bald fellow who I got the feeling was boss at Kabuto announced in English that I was getting the meat of the eel.  The next skewer, he told me, was the guts.  And after he placed the skewer of what he had identified as the eel's head on my plate, he stood back and expectantly watched my reaction as I ate it.


Thanks to my having watched the Tokyo episode of I'll Have What Phil's Having and seeing the food travel show's host, Phil Rosenthal, struggle with eating the eel head and being told that he should eat the bones, I knew to expect that it'd be boney but also know that the bones actually were edible.  So I crunched down the whole thing -- which really wasn't all that difficult to do, especially since it was covered by the incredibly delicious sauce that all the eel skewers at the eatery had been bedaubed  with -- and with that, the bossman looked to have decided I knew what I had gotten myself in for, relaxed and gave me a thumbs up along with another big smile!


Skewers of two different sections of eel fin, and eel neck followed.  Then, with a flourish, Kabuto's female cook placed the seventh skewer before me and announced that it was rebayaki.  "Oooo, liver!" I exclaimed, knowing that I had been given a rare treat.  After I ate it with a relish, she said, "You know!" in English to me -- and after I exclaimed at the fact that she too knew English, she let out a little giggle and asked me how I knew about the place.


I began by telling her and the bossman (who I could easily imagine being her husband and was listening with interest to our conversation) that I had seen Kabuto featured on two TV shows (NHK's largely animated adaptation of Michael Booth's Sushi and Beyond book as well as I'll Have What Phil's Having).  I also mentioned that I had learnt more about the place online and knew to identify the eatery via its famous lamp (although I thought it best not to ask what had happened to the old fellow who usually was the featured face of this over 60-year-old restaurant) -- after which the bossman proudly pointed it out to me.  (For those looking for it: its position has been moved and it doesn't look as grubby and large as before -- but is still definitely distinct looking and recognizable.)


I wouldn't be surprised if they had heard all this many times before but they nonetheless seemed very pleased to find out how I knew about their place.  Seeing that they were in a really good mood (and much friendlier than I had expected), I decided to see if -- unlike what I had read on another blog -- I also could order individual skewers rather than/in addition to the hito-tori.


Taking out a piece of paper on which I had written the Romaji words for the eel parts I wanted to eat more of, I placed more orders -- which were accepted with no trouble at all.  In addition, the bossman asked to see the paper after I told him and the female cook that I had prepared in advance for the possibility of their not being able to understand English, raised his eyebrows sky high while reading it and then made to tuck it away in his shirt pocket before handing it back to me with a laugh.

While I was served and savored the three extra skewers and one additional bottle of beer I had ordered, the customer sitting next to me started talking to me -- also in fluent English.  After I told him I had had the liver skewer, he proclaimed that I was really lucky -- as this eel part sells out by around 4pm most days (at this restaurant which opens at 2pm Monday to Saturday) and, as it so happened, it was all sold out by the time he got to the restaurant that evening (about 20 minutes after me)!  In turn, I pointed out how lucky he was to live in Tokyo and thus be able to eat regularly at Kabuto.  He acknowledged this fact with a laugh and, over the course of our conversation, also informed me that there are very few eel skewer restaurants like this one left, even in Tokyo.

Further into our food-heavy discussion, I shared that I had first found out about the existence of eel skewer restaurants via the Oishinbo manga series some years back and had yearned to eat at one as a result.  So, really, this meal at Kabuto was a fairly long-held ambition, even dream, come true.  Even better was how the experienced reality turned out to be actually more wonderful than how I imagined it would be -- both in terms of the taste of the eel skewers I ate but also the goodwill I was accorded by the people behind the counter and sitting alongside me at the eatery. :)
Posted by YTSL at 11:08 PM

I heard eel is good to eat. Never tried it but I've seen them go over in fish latter in Columbia River...Coffee is on
https://en.wikipedia.org/wiki/Columbia_River

Oh wow. I love to eat eels too.
I have never been to Japan!Must plan a trip there and use your blog posts as a guide :D

I love eel, especially when prepared by the Japanese. I've also eaten eel in London's East End (jellied eel!) and eel in Chinese dishes -- but can't recall eating eel when I was in the US.

By all means ues my blog posts as a guide -- and also to help you figure out where in Japan you'd like to visit (first)! :)