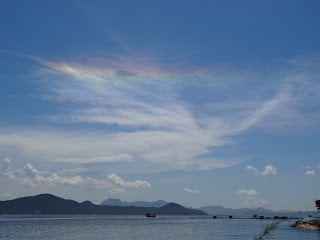 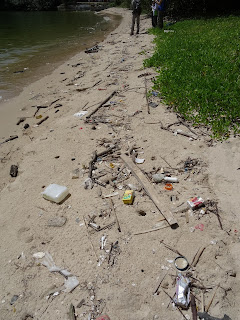 With natural world being so beautiful, it really feels
such a shame when humans dirty it up 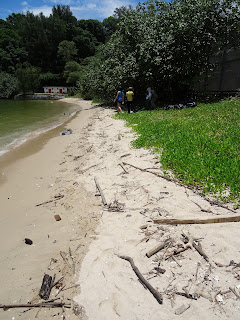 See how much nicer that same beach looks
after it's been (largely) cleaned up?

"Give a hoot -- don't pollute!"  That was a lesson I learnt as a kid from Woodsy Owl, the owl icon for the United States Forest Service who would appear in comic books which starred his friend and fellow environmentalist, Smokey the Bear (whose own trademark message was "Only you can prevent forest fires!").


And as I gazed out at the garbage floating in the waters of Hong Kong, and also the rubbish strewn on the beach at Chi Ma Wan where I've been regularly venturing to with some others to help clean up this morning, this now adult got to wishing that Woodsy Owl's exhortations had been communicated to -- and impacted -- far more people all over the world.  Instead, it often can seem like too many individuals and corporations really don't seem much concerned at all if the planet in which we live gets more and more polluted by the day, hour, minute and even second.


In all honesty, there really do seem to be too many people out there who have not been taught to care about the Earth -- or, worse, have had the message imparted to them but still just really don't give a damn.  For me, it can be such a crying shame, especially when I'm presented with evidence of how beautiful nature is/can be when humans don't foul it up.


Probably due in no small part to today being another mega scorcher, the number of volunteers for this month's beach clean-up was less than half that of the previous two months.  Once again though, we looked to have made some difference against the odds -- in that the beach we set ourselves to cleaning-up this morning actually did look noticeably less strewn with plastic containers and utensils, glass bottles and tubes, toothbrushes, ballpoint pens, broken pieces of styrofoam and such just a few hours -- and lots of amount of sweat shed! -- later.

Even though it couldn't approach the beauty of the iridiscent clouds we spotted earlier this morning, I still do feel glad to have played some part in helping make the beach look a good deal better than before we stepped foot on it today!  And as much as seeing pollution makes me inclined to lose faith in humanity, discovering that there actually are people out there who are willing to volunteer time and effort to help clean up messes that they didn't create can make me feel that all is not lost just yet!

forgot about woodsy owl. One of my son friend played "Smokey bear" and went around to school and was part of fire prevention.
Coffee is on

Thanks for the cool story! It's funny... I actual forgot the name of Woodsy Owl (and had to look it up on Google). But "Give a hoot, don't pollute!" really is one of those phrases that's stuck with me over the years! ;)

I love the sky shot. I'm don't remember the woodsy owl but Smoky bear was big when I was a kid (I was born in 1957 so early 60s are when most of my memories start).

I'm glad you -- who take so many sky shots of your own -- like that sky shot! And I don't know if Woodsy Owl and Smokey Bear are known to youngsters these days but I was reading comic books in which they featured in the 1970s... ;)