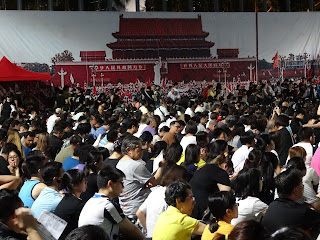 On this day, people in Hong Kong remember
what happened in the heart of Beijing 27 years ago 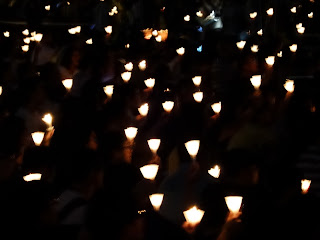 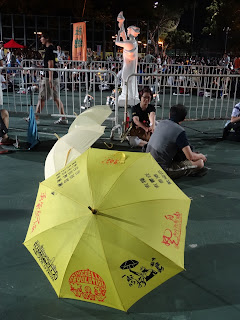 
The portends were not good for this year's edition of the annual vigil held at Victoria Park every year since 1989.  For weeks, there have been reports and discussions in the media of some younger Hong Kongers deciding against taking part in commemorations of the Tiananmen Square Massacre.  Also, the Hong Kong Observatory had predicted rain and thunderstorms for this evening, leading some of us who had been at Victoria Park on June 4th, 2013 to wonder whether there'd be a deluge like the one we had experienced that night.

But as I walked to Victoria Park with three friends earlier this evening, we saw youthful Hong Kongers, like Joshua Wong, helping to fire up the crowd and appealing to them for further support as well as more seasoned activists and politicians from such as the Civic Party (among whose representatives was Ken Tsang), the League of Social Democrats and People Power.  And as we made ourselves comfortable on one of the six football pitches at Victoria Park that were filled with people this evening (along with part of the grass lawn nearby), I was pleasantly surprised not only by the ground being dry despite it having rained in the afternoon but also by how the temperature was at an agreeable level for hanging out outdoors!


Most heartening of all was to see that many thousands of other people were about in Victoria Park this evening; with the organizers of tonight's Candlelight Vigil estimating attendance at 125,000.  And even if this number was the lowest it's been for some years, it's still hardly insubstantial -- and I believe that the very act of turning up and taking part is one that shouldn't be scoffed at.

Lest we forget: The annual commemorations at Victoria Park on June 4th are the largest commemorations in the world -- and one of the very few allowed to take place on Chinese (albeit Special Administrative Region) soil -- of political protests by brave and idealistic people, many of whom lost their lives trying to make their country a better place by becoming democratic.  It also represents a shout out to the world that the Tiananmen Massacre should not be forgotten, its victims should be vindicated (and their parents allowed to mourn), and that Hong Kong remembers -- because, if nothing else, to allow these events to be forgotten will help pave the way for them to re-occur, including possibly on Hong Kong soil.
Posted by YTSL at 11:59 PM