The Golden and Silver Pavilions of Kinkakuji and Ginkakuji (Photo-essay)

After successfully making it to Nijo Castle via subway on the first day of my recent Kyoto vacation, I decided to take the plunge and take my first bus ride in the city.  Chalk it down to fatigue (on account of my day having begun with a flight that departed from Hong Kong at 1.45am) rather than my inclination to join the fabled ranks of sleeping Japanese but I ended up falling asleep on my way to my next intended destination.

Having intended to head to Ginkakuji, I woke up with a start when I heard the announcement for what sounded like the Japanese name for the Silver Pavilion Temple. But as I rather groggily made my way towards the ticket office of the place, I started getting an inkling that perhaps I actually was at the similar sounding Kinkakuji instead -- and definitely got confirmation that I was at the Golden Pavilion Temple when I rounded the corner and beheld the stunning sight before me!

After touring that temple's grounds, I found that there still was time to go to my original intended destination though. Thus it was that I ended up visiting Kinkakuji and Ginkakuji in one day -- making it so that along with Nijo Castle, I was at not just one or two but three different UNESCO World Heritage-listed properties over the course of just a few hours! ;O 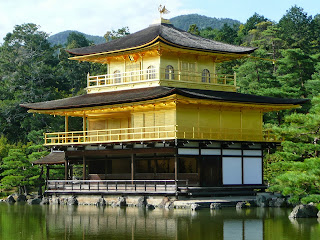 It's hard to deny that the Kinkakuji makes for
a pretty photogenic site and sight... 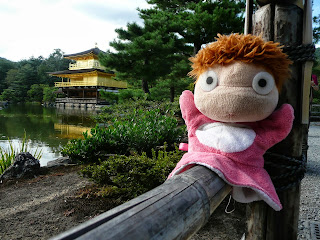 ...so of course Puppet Ponyo had to have a photo
taken in the vicinity of the Golden Pavilion! :) 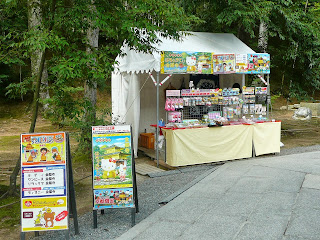 I think it worth noting that Kinkakuji is not without its
Hello Kitty-fied and other kawaii souvenir possibilities... ;b 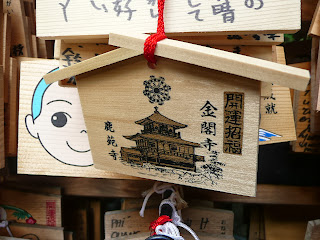 Kinkakuji also had its choice of cute and more elegant ema 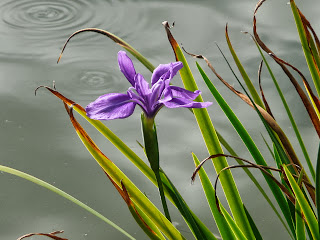 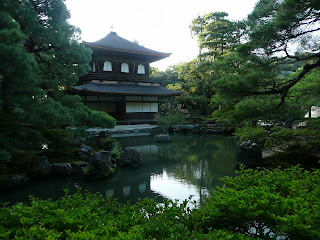 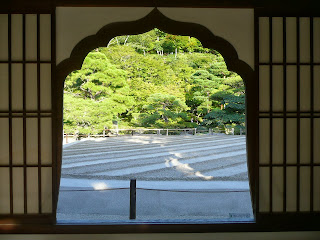 As I strolled about the place though, I discovered that
Ginkakuji definitely has its (own) charming spots and sights 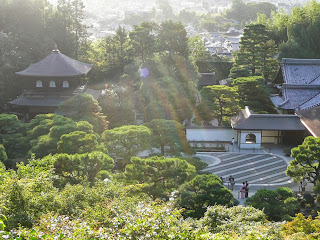 In particular, I liked Gingakuji's extensive grounds
--  especially those sections of it that offered
cool scenic views from higher ground :)
Posted by YTSL at 11:17 PM

Hi YTSL -- your last picture looks very... ethereal! As for Ponyo, perhaps she's getting the hang of doing photo shoots and knows how to pose now? :P

Nice photos and I real liked the Iris.
I'm back on line I should be taking part in photo hunt this weekend.

Wow, gorgeous photos! I love that one of the glowing greenery framed by the ornately-shaped archway at Ginkakuji. Also the radiating ripples in the background of the purple iris photo. Plus I'm always glad to see puppet Ponyo making her appearance.

I'm quite impressed at your managing to hit 3 World Heritage sites in a single day!

Hi YTSL, visiting 3 World Heritage sites sounds amazing. What a great experience to be able to do that in only a few hours. Your photos are very beautiful and puppet ponyo looks fab as always.

Have a wonderful trip. Looking forward to seeing more of your beautiful photos.

You like the sunlight with the rainbow colors in it? As for Ponyo: let's just say she and I now have improved in terms of finding suitable places for her to pose... ;b

Glad you like the photos and the iris. I plan to be getting back to Photo Hunting this weekend myself. :)

Thanks for liking the photos. Re those ripples: I don't know what made them, as it wasn't drizzling that day... and I'm so happy to find people enjoying seeing my shots of Puppet Ponyo. :)

And the next day, I visited yet another UNESCO World Heritage-listed property in Ryoanji... pretty close to unbelievable, huh? ;b

BTW, am back from Puppet Ponyo and I are back from our trip already! But yeah, we did have a wonderful time in Kyoto... :)

I think the brilliant sight of the Gold Pavilion jolted me awake! ;b

Great photos! I really enjoyed visiting Ginkaku-ji and wandering around the grounds. The gardens are beautiful. Sadly, when we visited Kinkaku-ji, it was absolutely pouring with rain so I could not appreciate it properly. Hopefully I will get to go back one day. :)

Am glad you like the photos -- and must say I'm happy as well as surprised that our photos of Ginkaku-ji actually are pretty different!

Too bad re Kinkaku-ji -- and hope you do go back there (and Kyoto in general) one day. :)