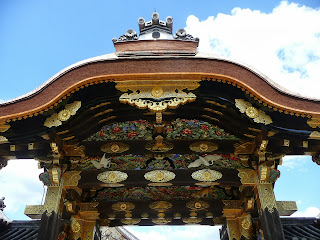 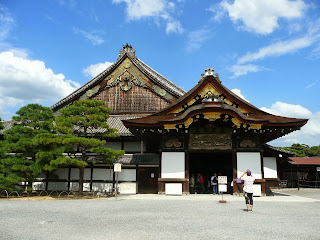 The Ninomaru Palace of Nijo Castle* 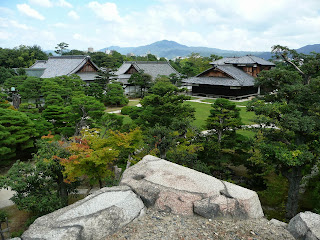 View from atop a castle wall of the Honmaru Palace*
Ever since I was a kid, I've been fascinated by castles.  This may sound strange coming from a Malaysian -- but something to bear in mind is that for many of my preteen years, I also spent a portion of every year in England.  And England, to put it mildly, sure does have its share of castles -- ruined and still lived in.

So strong was my fascination with these particular structures that in my late teens, I actually went on a self-guided tour of castles in northern Wales (including UNESCO World Heritage-listed Conwy, Carnavon and Harlech).  And in recent years, I've been visiting my share of castles once again; only these days, it's largely been ones in Japan (like Himeji) -- with the odd German and Turkish one thrown into the bargain -- rather than British ones.

Having been introduced to castles by way of Britain, Japanese castles don't quite fit the archetype I have of these fortified structures.  For one thing, they tend to be constructed of a lot more wood than stone.  For another, they often just are way too visually attractive!

While I reckon Himeji-jo cannot be beat in terms of its exterior beauty, I think Nijo Castle (AKA Nijo-jo) is tops in terms of its interior beauty -- which made it really sad from a shutterbug's point of view to be told that photography is prohibited inside Ninomaru Palace.

But at least visitors are allowed inside Ninomaru Palace to see its beauty with one's own eyes and, also, experience walking along its very cool nightingale floors (so-called because they are designed to emit "chirping" sounds when walked upon) -- whereas, in contrast, the Honmaru Palace's buildings are not open to the public, only its admittedly already aesthetically impressive garden.

These restrictions notwithstanding, I still did opt for Nijo Castle to be the first attraction I visited on my recent Kyoto vacation -- though partly, I have to admit, because it's the sole attraction I had on my "to visit" list which I could easily get to by subway rather than bus, and I decided that it'd be best to ease myself into using Kyoto's public transportation by first using its subway rather than the buses!

In any event, Nijo Castle did not disappoint this visitor who came away feeling privileged to have seen the beauty of a structure that began to be constructed back in 1601, whose wall paintings and other sections are understandably considered Important Cultural Properties of Japan, and which is one of the properties that make up the Historic Monuments of Ancient Kyoto on UNESCO's World Heritage list.

*Addendum: I find it funny that I ended up taking a few photos that look very similar to ones on sarah sbk's Nijo Castle blog entry which I first checked out back in 2009! ;O
Posted by YTSL at 8:31 PM

Hi welcome back! I'm planning to visit Kyoto soon, and welcome any restaurant recommendations from you :)

When are you headed to Kyoto? I'm planning a Kyoto restaurants blog entry... can you wait for it? :b

Thanks for the "shout out".

When I think about Kyoto my first thoughts are about how much fun it was to scurry along the halls in the Ninomaru Palace in my stocking feet and listening to the nightingale floors.

Sure I can wait. The plan is to leave for Tokyo on 12nd stay there for two days (one of these set aside for Nikko inc. the National Park)
and then it is Kansai all the way!!

You're welcome re the "shout out".

Re the nightingale floors: I tried to walk lightly so that they wouldn't tweet but... ;b

You leave for the 12th of this month or in December??

Oh! Okay, if I don't get the restaurant blog entry up before you leave, I'll email you my recommendations! :)