An early morning visit to Ryoanji's rock garden and more 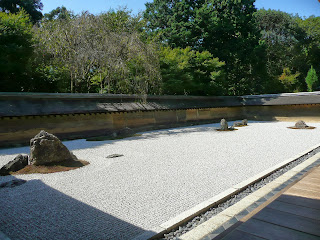 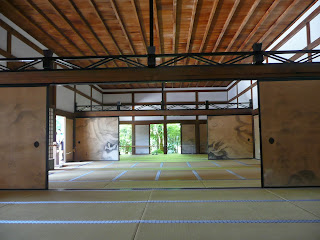 Most people literally turn their backs, and pay scant
attention, to this elegant meditation hall (hojo)
located right next to the rock garden! 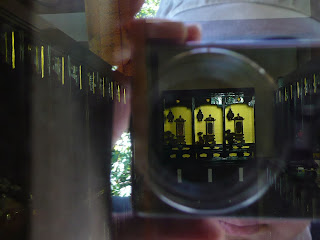 Peeking into a small building in the temple's grounds,
I spied what may be these beautiful ancestral tablets...

In what can seem like another lifetime, a friend and I decided to vacation at Florida's Walt Disney World. Determined to maximize our time there by not having to spend too much time waiting in long lines and such, I bought a guidebook to that super popular amusement park that gave tips on how to beat the crowds.


One of the more basic of them was to get there as early as possible -- and this was something I determined to do on my recent Kyoto vacation (even though, by nature, I'm most definitely not an early bird type at all).  And boy, did this "strategy" pay dividends when I visited the Ryoanji, one of Kyoto's top attractions and the place that I wanted to be able to appreciate in (relative) silence!


More specifically, when I got to the vicinity of its fabled rock garden, I found fewer than five other people at the site.  Thus it was that I was able to spend precious time silently appreciating its spartan aesthetics and ingenious design which makes it so that it's pretty much impossible (except from the air, I'd guess) to view all 15 of the rocks in it from any single vantage point. (And, ahem, take photos of the rock garden sans and with a certain Puppet Ponyo... ;b)

About 15 minutes after I arrived at the rock garden's viewing area, the tranquility was dramatically broken by the arrival by a group of teenaged Japanese school students.  To be fair, I wouldn't call them rowdy but they certainly were... enthusiastic and very into counting aloud the number of rocks they could see from different vantage sections of the viewing area!  And, actually, because I had had those previous moments of relative silence and solitude in the area, I found myself observing their antics with some amusement rather than irritation.


But when, some 20 minutes afterwards, a larger group of older tourists entered the area, I decided to take my leave -- and went out to explore other sections of Ryoanji, including the green area surrounding its water lily filled Kyoyochi Pond. In the area between the rock garden and Kyoyochi Pond are a couple of interesting structures.


One of them, I was surprised  to discover, is a Burmese style pagoda that serves as a memorial to the Japanese soldiers who died in Burma during World War II (and yes, it's true that the sight of it got this film geek thinking of Kon Ichikawa's The Burmese Harp!).  The other more conventionally Japanese looking building had no sign explaining what it was -- but I got the distinct feeling that it also has something to do with the deceased.  Perhaps it's just that it was so very quiet in that area, but I ended up not wanting to tarry too long there!

All in all though, I spent quite a bit more time at Ryoanji than I expected to -- not least because its ground are larger and more varied than I previously had the impression that they would be. But there were a few more temples to visit on my agenda that day. So after a couple of satisfying hours at the fourth UNESCO World Heritage listed property I had visited within 24 hours, off I went to see still some more impressive Kyoto sights! ;b
Posted by YTSL at 8:17 PM

What a very smart decision to visit early in the morning. And glad the school kids weren't too intrusive. Did you eat at the Yudofuya restaurant there? We didn't and in hindsight I should have....

The decision to visit Ryoanji early in the morning definitely paid dividends, I felt. Re Yudofuya: I had aimed to go but when I was in the vicinity, I decided I was feeling too hot to eat any yudofu... and ended up waiting for a few hours to go have a cold soba lunch in the vicinity of Kitano Tenmangu (my third stop that day) instead!

I'm definitely one of those 'must go early' types to anyplaces that potentially have many visitors; tourist spots, shopping malls, food courts, etc. I got distracted easily!

Oh, so you go early not so much to beat the crowds as to make sure you have plenty of time at the places? ;b