Fushimi Inari - the shrine with many, many torii (Photo-essay)

When I was young, I used to love reading comic books at bed-time.  Often, I'd make up a stack of comics to read that night and start of with what I thought would be the least interesting, saving what I thought was the best for last.  If truth be told, I often would fall asleep before I went completely through my stack -- and yet I kept on persisting with this arrangement because, well, it really can be very pleasant for things to get better and better!

Many years later, I still find myself wanting to save the best for last -- or at least later.  In the case of my recent Kyoto trip, I opted to not go to the Fushimi Inari shrine -- which actually was at the top of my "Kyoto temples and shrines I want(ed) to visit" list -- until my final full day in that city.  Suffice to say here that I most certainly was not disappointed by it -- something that can be discerned by my having spent the longest time (around 3 hours!) in any Kyoto shrine at that particular Shinto place of worship! :) 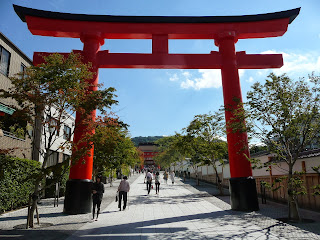 The first of many torii that I passed through/under at
Fushimi Inari, a shrine dedicated to Inari,
the Shinto god of rice, foxes, sake, fertility and more! 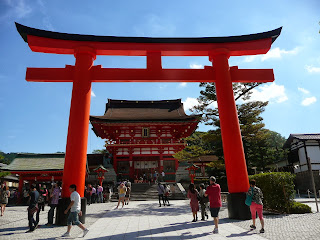 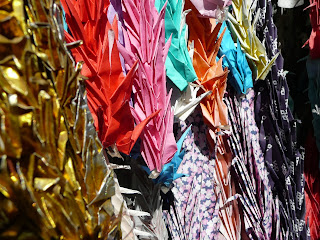 In the shrine grounds can be seen thousands of
origami cranes as well as torii! 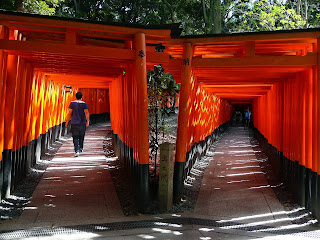 In case you thought I was just kidding about
there being thousands of torii at Fushimi Inari shrine... 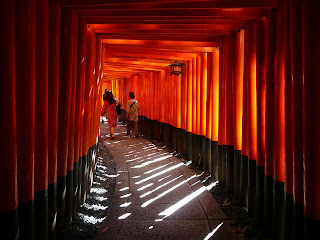 The view inside a "tunnel" of torii 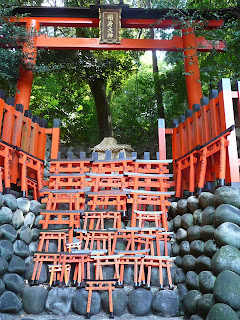 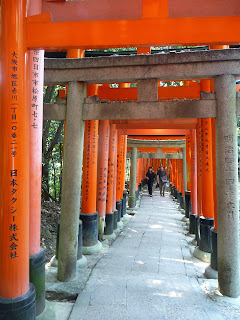 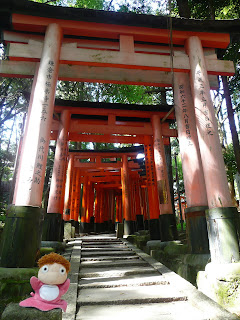 Of course you expected to see this:
Puppet Ponyo posing with some of the torii :)

And yes, because I was snap-crazy at Fushimi Inari shrine, there will have to be a second photo-essay of images of this amazing Kyoto shrine! :b
Posted by YTSL at 10:28 PM

Although the bulk of recent readers' comments are posted on Photo Hunt, personally I continue to find these Kyoto images and texts enjoyable and informative. They've even prompted me to read more online info about Shinto. I find the Kami, or resident spirits of Shinto shrines, to be especially fascinating.

You wisely place Ponyo on the left, so as not to distract the viewer from the striking torii tunnels. In this photo, Ponyo is more of a selfless guide. Although we mere mortals cannot actually see Kami, Ponyo's expression of constant wonder may suggest, for those of us with a free imagination, that she has a secret communication with the resident spirits of this shrine.

Thanks so much for leaving comments on those posts that had hitherto been bereft of comments -- as well as for your continued reading and appreciation of my Kyoto blog posts.

Re Puppet Ponyo's expression in the photo on this blog entry: I have to admit that it looks on the bit shocked, or at least astonished, side to me! And yes, maybe she did spot some kami... perhaps hanging out behind me as I took her photo... ;b