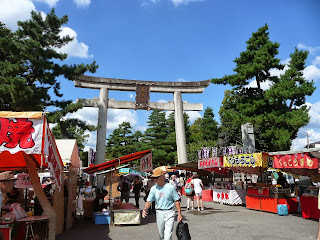 The Kitano Tenmangu shrine is host to a big flea market
on the 25th of each month, including September :) 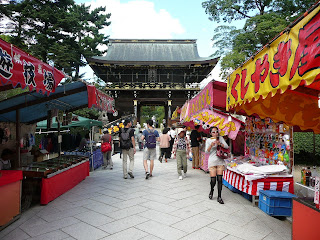 Colorful stalls (including one whose wares included
plastic Hello Kitty masks!) line the way into
the shrine as well as the surrounding area 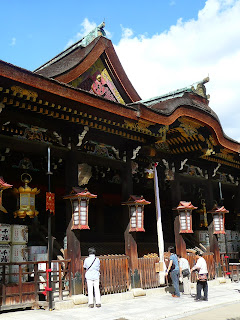 But lest it not be clear, Kitano Tenmangu is indeed
a shrine where people go to offer up prayers
to Tenjin, the Shinto god of scholarship

Over the course of some 24 hours, I visited five temples and shrines, including four UNESCO World Heritage-listed properties in the form of Kinkakuji and Ginkakuji, Ryoanji and Ninna-ji. But while Kitano Tenmangu does not have the honor of being on that list, it does have something that those other places doesn't have: i.e., a monthly flea market!


As a teenager and adult in England, I used to enjoy frequenting such as Camden Lock Market and during my time in the US, I loved checking out garage and yard sales. Although I didn't buy that much stuff, I liked looking at the various wares offered up -- and thus it was at the Kitano Tenmangu flea market, where items ranging from old photographs, not so old cameras, a variety of sharp looking knives and food items were on display and sale.

Since I was at there, I figured I might as well check out the shrine itself -- one of a number throughout Japan dedicated to a 9th century politician thought to have been transformed after death into the Shinto god of scholarship that includes the Dazaifu Tenmangu shrine in Kyushu that I visited some years back.


Among the sections of the shrine that particularly caught my eye was its plum tree orchard -- which, unfortunately, was not open to the public at this time of the year.  Funnily enough though, it wasn't at Kitano Tenmangu but, instead, Ryoanji where I smelled something fruity -- that got me thinking of peaches and apricots -- in the air...

Incidentally, something I generally found interesting in Kyoto and also had experienced on visits to Kamakura was that while there are admission fees for Buddhist temples, there are none for Shinto shrines.  If anyone knows why this is, could they please enlighten me as to the reason?  This especially because few Buddhist as well as Taoist and Hindu temples I've visited in Malaysia, Thailand, Singapore, Hong Kong and Malaysia levy entrance fees -- though it's also true enough that quite a few English and German cathedrals do charge for entry into special parts of their properties, such as the treasure house or crypt.
Posted by YTSL at 10:48 PM

Hi YTSL, I also enjoy going to markets at places I visit. It's fun comparing what I find there versus at home.

Thanks so much for sharing your beautiful photos of your trip.

I think you'd like the Hong Kong street markets. I certainly do -- and get such as cargo pants at them! ;b

Thanks much for your comments: they help me realize there are indeed people looking at my vacation entries and enjoying them. :)

Did you buy anything at the flea market? Does flea market there mean older and used things the way in does here?

Just bought stuff to eat (e.g., an ear of grilled corn!) at the flea market. And yeah, it looked to have a lot of older and used things for sale -- but also some handicraft and newer items.