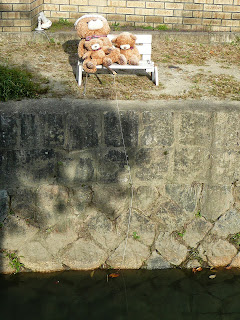 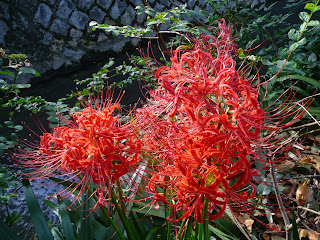 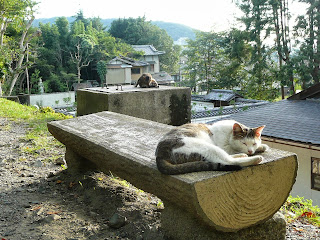 After clambering up and then down 233 meter high Mount Inari as part of my visit to the Fushimi Inari shrine, I found that I had worked up quite the appetite.  While there are some eateries located near that shrine, none of them looked like they'd be all that great.  So I headed out of that area to Kyoto station, where I knew a whole bunch of restaurants could be found.

After having a thoroughly satisfying meal at the Kyoto Station branch of Kushinobo (where I met a charming Japanese couple who helped me figure out what to do with various items I found myself presented with, and who asked to take a photo with me on account of my being the first Malaysian they had ever met!), I felt refreshed enough to traipse about some more -- this time along the famed Philosopher's Path that stretches from near Ginkakuji southwards down to near Otoyo Jinja.

If truth be told, I found the Philosopher's Path to be a trail along which one could have a pleasantly relaxing walk -- but not much more than that.  But while I realize that it'd be a much more scenic space during cherry blossom season, I also could imagine it being far more crowded and noisy -- so I'm glad that I went strolling there when I did, even while not considering this famous urban walking trail to be a major highlight of my Kyoto trip.
Although the Philosopher's Path does skirt a number of a small shrines and other attractions, I have to admit to being too tired to want to go and thoroughly check most of them out (though I did make an exception with Otoyo Jinja since it's pretty difficult to resist a shrine with a thousand year history and a number of rat statues and figurines!).  Instead, I was content to enjoy what might be deemed to be more trivial sights -- like a number of sleeping cats that really did seem untroubled by the people who passed by, and -- in many cases -- stopped to take photos of them!

Still, for me, that was part of the charm of the Kyoto I found on this visit: i.e., a city with many historic sites and treasures but also one that was living, and in a way where it seemed like there was a greater value placed on making sure that people had a high quality of life than in many other faster moving and more workaholic parts of Japan.
Posted by YTSL at 11:30 PM

I like the peacefulness of the cat. Anyway the name of the flower is Higanbana.

I'm amazed at the peacefulness of the cat considering the number of people taking its photo! ;b

Thanks for giving me the name of the flower. :)

These photos along the Philosopher's Path are a relaxing interlude, but no less important for me than your previous Kyoto posts. These photos capture a tranquility which is best illustrated by the photo of the cats. This "relaxing stroll" leads me to suspect that the creator of this website wouldn't mind spending some future retirement time in Kyoto.

The stroll along the Philosopher's Path was relaxing but if truth be told, THE path along which inspired thoughts of "this place would be a nice one to retire to" actually was the one along the walls of Hwaseong Fortress in Suwon, South Korea!

Sadly, we didn't have time to walk the Philosopher's Path. It looked like a relaxing stroll though. I imagine it's spectacular when the cherry blossoms are in bloom.

It is a relaxing stroll -- with the path being much less crowded than I thought it would be based on some accounts I had read. To be sure, there are more beautiful parts of Kyoto -- but it's a nice place to head to when you're feeling "templed-out", as can be the case on visits to Kyoto. :)