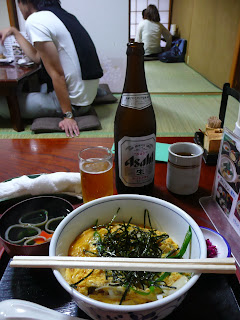 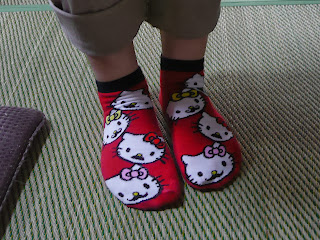 Kawaii Hello Kitty socks on the waitress that
I shameless asked if I could take a photo of! Another no frills dining (and drinking)
establishment I find pleasantly atmospheric :)

On my July visit to Hokkaido, I did what I resolved to do food-wise: i.e., dine at a kani-ya (specialist crab restaurant) and eat lots of great uni!  In contrast, mid-way through my recent Kyoto visit, I decided to abandon my one pre-trip food resolution to have a traditional kaiseki meal in Kyoto.

The problem was not so much the cost -- though it's true enough that traditional kaiseki (in Kyoto as well as elsewhere) prices can be on the prohibitive side.  Instead, the problem was that I found myself either feeling absolutely ravenous at meal times in Kyoto -- which made the thought of an elegant multi-hour meal not all that attractive! -- or feeling more in the mood for something on the light side -- and therefore not wanting to have a multi-course meal!
Looking back at the meals I had in Kyoto, it's interesting to realize that I generally ended up going for what could be characterized as pretty simple fare.  For example, the very first meal I had on this trip was a 380 Yen breakfast after getting off my train and arriving at Kyoto Station which consisted of a bowl of rice, a small serving of pickles, an onsen egg, a small bowl of natto, some seaweed (to wrap the natto with), a bowl of miso soup and all the green tea and cold water I wanted to drink. (Funnily enough, I had had a very similar breakfast at Sapporo Station during my Hokkaido holiday -- and it also cost 380 Yen too!)
And on my second day in Kyoto, I was happy enough to have my lunch be a portion of zaru soba washed down with a surprisingly large (500 ml!) bottle of Asahi beer at the kind of mom and pop eatery I've seen in Japanese films about the good old days -- that I wish I had perked up the courage to take photos of but, at the time, felt too shy to do so, not least because it was full of elderly customers who, judging from the way they bantered with the motherly owner of the place and younger folk I presume were her cook son and waitress daughter, were long-time regulars.

While lunching the next day in another traditional eatery -- this time in Higashiyama -- though, I overcame my shyness to snap a couple of photos: one, of my meal that day -- of a donburi with really delicious scrambled eggs atop a combination of beef and vegetables layered on top of the white rice base, pickles, miso soup and, yes, more beer(!) that ; and another of one of the waitress' eye-catching socks!!

That evening, I had one of my favorite meals of my Kyoto vacation: at a kushiyaki-ya housed in an over 100 year old machiya called Kushi-kura, where I had the most elegant as well as some of the tastiest yakitori and kushiyaki I've tried to date -- interesting too, as among the selections I had were sticks of lotus root and gluten along with the more usual (for yakitori places) chicken liver, giblets, skin and cartilage!
Funnily enough, until my visit to Kushi-kura, the yakitori and kushiyaki places I had been to in Japan tended to be more "rough" as well as colorfully atmospheric in feel than the ones I go to in Hong Kong.  While definitely also atmospheric, Kushi-kura really did feel -- and was -- a different class to them all.  And yet -- and this will give an idea of how good value I often find dining establishments in Japan to be -- the total bill, for a thoroughly satisfying dinner and some nice-tasting junmai sake in pleasant surroundings, was just 3,790 Yen (i.e., less than HK$300 or US$39), whereas I'd expect the equivalent in Hong Kong to come closer to the HK$400 mark at least!
Posted by YTSL at 7:03 PM

Am glad I'm not the only one who thought so! ;b