There's no doubt about it -- my first Fushimi Inari shrine photo-essay was heavy on the images of torii, as might be expected of my having visited a shrine with thousands of torii.  But that which may well have been my favorite of all the Kyoto attractions I checked out really does have a lot of other eye-catching structures and other sights.

Something else that I think should definitely be pointed out is that, as Judith Clancy wrote in Exploring Kyoto: On Foot in the Ancient Capital, "Without making the trek to the top of 233-meter [high] Mt. Inari, you really cannot claim to have seen the shrine."  And yes, for the record, I did trek up and down hill, and on a downhill path that crossed paths with the one I took uphill a couple of times, yet offered up a whole host of interesting -- and often also unexpected -- sights nonetheless.

And while I can see how this trek would not be everyone (including the not so fit), one really doesn't see even one tenth of this shrine's sights without venturing past its famous -- and much photographed -- double row of torii -- as I hope that this photo-essay (and the previous one) helps to show:- 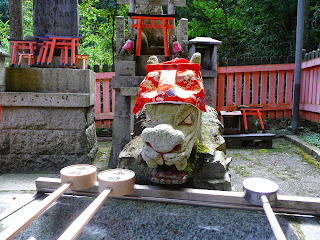 The red headgear on this dragon at one of the shrine's
water ablution troughs doesn't make it look less fearsome! 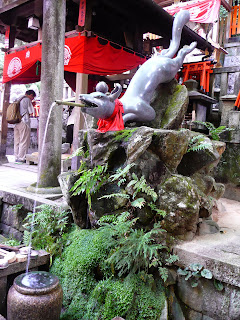 At another water ablution spot is an animal
that I know is supposed to be a fox but whose visage
looks like a great big mouse/rat's to me!! 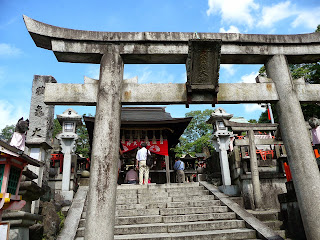 Upon getting up to the not very structurally impressive
highest point of the shrine, the saying that
"It's the journey, not the destination" leaps to mind... ;b 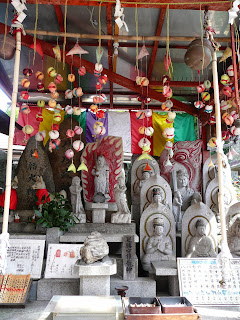 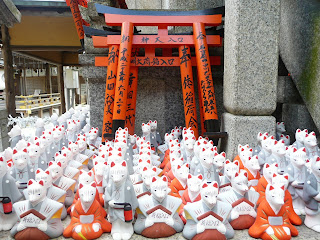 Still, there's no where near as many Buddha figures on Mt Inari
as torii and also fox head figurines and fox statues! 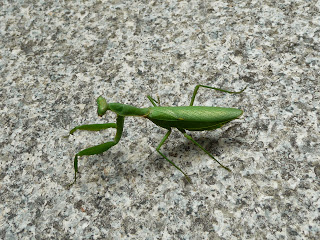 A praying mantis visited the shrine while I was there! 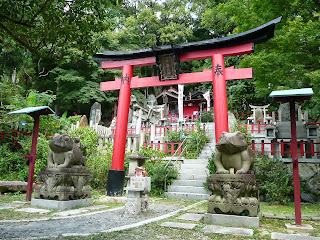 I didn't spot any real-life frogs while there -- instead,
I spotted big frog statues placed in positions where
one would usually expect to see statues of guardian lions! :O 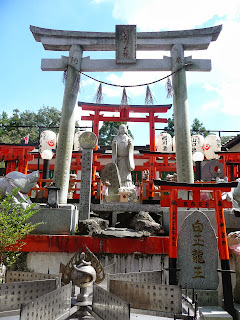 And can you see a pig and snake in this photo
along with foxes, guardian lions and what I'd
presume is a divine being, even if its form is
human, and yet more torii?
Posted by YTSL at 8:41 PM

After your previous photo-essay of the near-labyrinthian torii, these photos capture an Inari Shinto kingdom full of varied images. I like the Buddhist statues, the enchanting fox statues, the frog statues - all contrasted by a representative of the natural world, the praying mantis.

You're right, the fox statue does resemble a rat. However, if you'll excuse my inbuilt Sino-orientation, whenever I see an image of a fox, I can't help but think of fox spirits in Chinese supernatural literature or film adaptions such as the Painted Skin Hong Kong films.

Of all your Kyoto photo-essays, this is the one I would probably remember the longest.

Interesting that the sight of the fox statue got you thinking of Chinese supernatural literature or films such as "Painted Skin", old and new.

For my part, I got to recalling my visit to the Sasuke Inari shrine in Kamakura -- which, due to be set in greenery, got me thinking of "My Neighbor Totoro"! :b