There's no doubt about it: for all of the beauty and wonder that I beheld while visiting temples and shrines in Kyoto such as Kinkakuji and Ginkakuji, Ryoanji, Ninna-ji, Kiyomizudera, the Ryozen Kannon Temple and Kodai-ji, I couldn't help but succumb to what has been termed "temple fatigue" by the end of day 3 in the city of over a thousand temples and shrines.

So, after resolving that day 4 of my Kyoto vacation would be one where I'd steer clear of temples and shrines, off I went first thing in the morning to that shrine -- albeit a fun one -- to Japanese cinema called the Toei Kyoto Studio Park; a place where one can stroll along sets for samurai movies and TV shows and also check out attractions such as a Ninja Mystery House and watch samurai sword-fighting re-enactments! :b 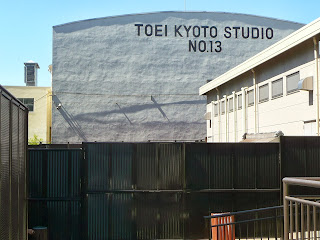 Among the cool things about the Toei Kyoto Studio Park
is that it's actually part of a working film and TV studio :) 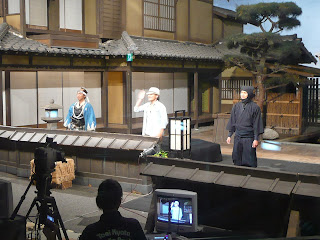 One does get the sense that the professionals working on
such as the Jidaigeki, Behind-the-Scenes Cinema Studio Live
show do actually work on real TV shows and films too 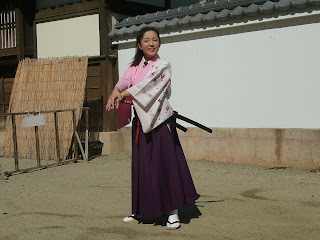 Ditto with such as the samurai fighting show's female(!) star :) 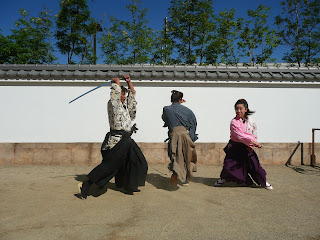 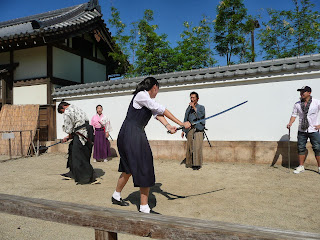 Billed as a "Samurai Swordfighting Lesson", it was fun to see
a uniformed schoolgirl being among those who volunteered
to take part in the action after the professionals
had demonstrated how to handle a samurai sword, etc.! 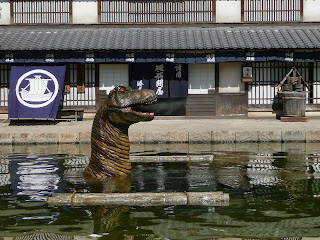 In the port town area of the studio grounds, a sea monster
rises up from the water every few minutes or so ;D 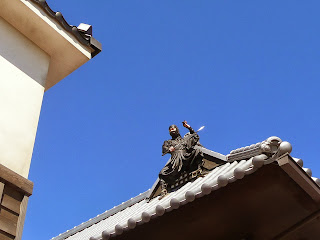 Ninjas (as well as samurai) abound at
the Toei Kyoto Studio Park! 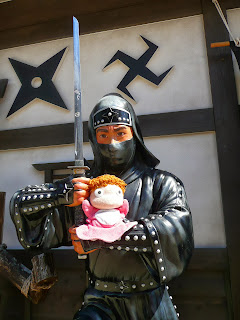 And yes, of course Puppet Ponyo couldn't help
but get into the act too at the studio park! ;D
Posted by YTSL at 11:14 PM

What a perfect way for you to relieve "temple fatigue." Ponyo seems to have a bit of a death wish there, lol

Nice to know there are places like the Toei Kyoto Studio Park in Kyoto, not just temples and shrines, however impressive they are, right? :)

Re Ponyo: I prefer to think that she really is fearless! :b

So no attempt at TV stardom?!

On my part or Puppet Ponyo's? In any case, I was too shy and Puppet Ponyo says being in my photographs is good enough! :D

You certainly experienced a variety of things as shown in your photo-essays: temples and rock gardens, scenes of nature from a train, colorful food markets and seducing your readers' taste buds with delectable photos of restaurant foods - and even scenes of martials arts demonstrations...After all this sensory stimulation, Ms Ponyo must be satiated and relaxing at home...Any chance you took in a performance of Gagaku music (ancient imperial court music)?

I didn't really expect to see you and Puppet Ponyo engaged in any combat scenes but.....does Toei Kyoto Studio have a place for those who want to "act out" perform and with photos too?
Hehe...just inquing...

Alas, no Gagaku music performance. Have you heard it? I wonder if it's similar to the royal shrine music I heard when visiting Korea's Jongmyo Shrine...

Toei Kyoto Studio Park definitely has places for people to "act out". E.g., one can volunteer for samurai sword-fighting training, people can dress up in geisha, samurai and ninja costumes, and there also is a 'ninja training dojo' and 'ninja mystery house'.

While the ninja training dojo appears geared for kids, the ninja mystery house appeared to be for adults as well as children -- so I went in there and was shown where secret doorways and such can be in a house, and then set the task of going through a series of rooms that needed to be entered and exited through secret entry ways!

Unfortunately, no photography is allowed in it. But, in all honesty, I was too intent on finding my way out of there to think of wanting to do any photo taking!! :D

You asked if I've heard Gagaku music. I first heard it in Gion many years ago on a trip to Kyoto.
Actually, Gagaku sounds a little dissonant, like some modern Classical composers. In fact, I've read online that modern Western composers have written Gagaku music themselves.

According to what I've read online, actually Gagaku originated in China, but the Japanese developed it their own way...There are good Gagaku performances on You Tube.

Thanks for the Gagaku Youtube tip. Re "Two Stage Sisters": It's a film I've heard about but have yet to view -- am hoping it'll screen at the Hong Kong Film Archive or somewhere else in Hong Kong one of these days. :)