On many hikes undertaken on days with a lower level of visibility than I would have liked, I've found myself resolving to return to the area on a clearer day.  This was the case on the hike from Mui Wo to Pui O -- along Lantau Trail Stage 12, but done in reverse -- that I went on one winter's day.

On the beautiful afternoon that I decided on to repeat this hike, the plan was to meet with two friends outside the Central pier for the ferry to Mui Wo.  But after one friend and I boarded the ferry, we discovered that the other friend had mistakenly caught the ferry to Peng Chau instead!  Thus it was that it was once more a hiking party of two that went along this trail, rather than the intended three this time around.  (And yes, thereafter, the two of us who had caught the correct ferry would always tease the other friend about her having forsaken us for Peng Chau that day! ;b) 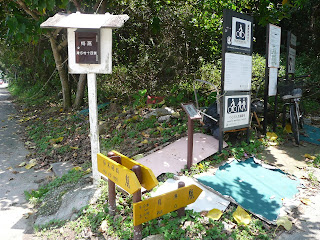 According to official estimates, it takes 3 hours to hike
along this 9 km route from Mui Wo to Pui O... 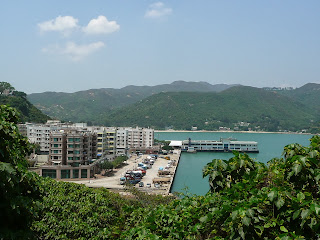 ...however the official time estimates don't allow for
hikers getting distracted by pretty sights along the way
and reaching out for their cameras to record them! 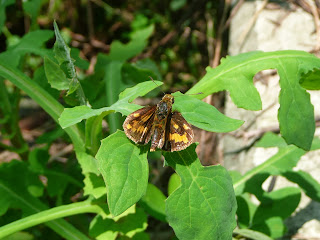 This little butterfly (or is it a moth?) is among the
(many) critters that I am willing to spend
a few minutes trying to take a nice photo of! :) 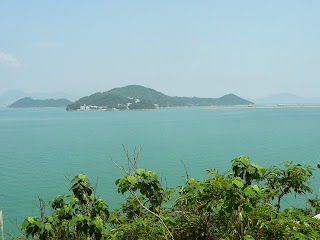 Hei Ling Chau - once home to a leper colony, and now
home to three prisons and an addiction treatment center 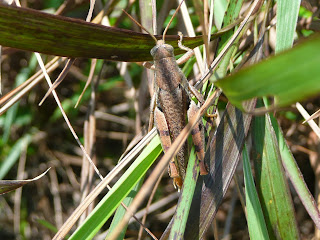 I sometimes think that grasshoppers are the insects
I see most while hiking in Hong Kong (and yes,
I do take some pride in being able to spot them! ;b) 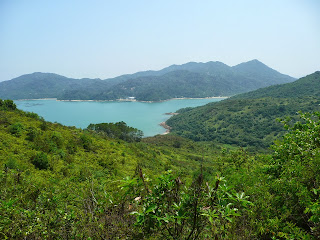 Looking across Chi Ma Wan to the Chi Ma Wan Peninsula
(that's home to yet another Hong Kong prison!) 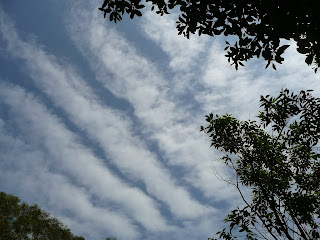 No, I did not Photoshop this photo -- the sky really did
look like this that afternoon! :b 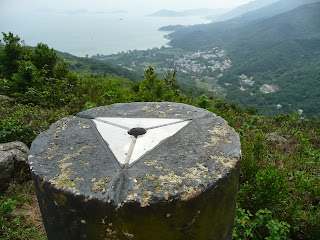 Trigonometrical station -- a sign that we're
literally at the high point of the day's hike!

Love the cloud photo and it reminds me I should look up more often when out taking photos. Clouds can be so interesting as in you photo.

I'm glad you like the cloud photo. Two people whose works have really inspired me to look at the clouds in the sky -- English painter John Constable, and Japanese auteur Akira Kurosawa. :)

The second photo from the bottom of the clouds, urged me to compare them to ripples of water,
or ridges of sedimentary layers of rocks. This photo, framed by the trees, urges the viewer to look up at the clouds, which suggest motion.

Thanks for mentioning John Constable because I hadn't looked at his works in a long time. I went back and studied his paintings. You're right, he is a great painter of clouds, suggesting their many moods...William Turner is another British master painter I admire.

I didn't know about William Turner until I Googled his name post your mentioning him. By any chance, did you mean his contemporary, J.M.W. Turner?

Yes, I did mean J.M.W. Turner (Joseph Mallord William Turner). In my ignorance, I didn't realize there was a William Turner who was a contemporary of JMW. Thanks for bringing that to my attention.