Seasonal food and drink this summer in Kyoto 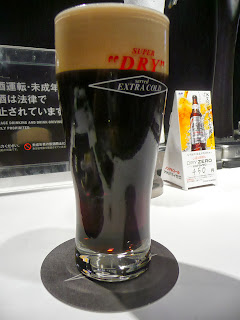 When Asahi Super Dry is "Extra Cold", it means
the beer's served at -2 degrees Celsius or colder! :O 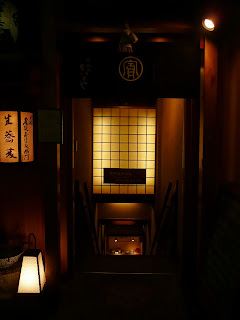 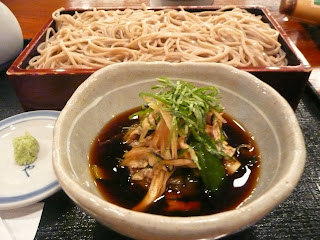 A delicious serving of seiro soba
with seasonal Kyoto-area vegetables

Every full day of my recent Kyoto vacation, I walked over 20,000 steps.  (Yes, I brought my trusty pedometer with me to Japan!)  On my final full day in the city that I came to like even more with each passing day that I was there, my step total approached the 30,000 mark -- what with my having trekked up and down Mount Inari on my visit to Fushimi Inari shrine in the morning and then traipsed along the Philosopher's Path in the afternoon.

So I felt no qualms or guilt about indulging myself with food and drink that evening -- and made straight for a bar I had seen a few evenings back that served nothing but Asahi Super Dry Extra Cold beer!  Having tasted both the regular lager and dark versions of this beer at the Sapporo beer festival back in July, I ordered a glass of the dark beer at the dedicated Asahi Super Dry Extra Cold beer bar in Kyoto -- and found it as refreshing as I had fondly remembered.

But while the beer at the bar was to my liking, the bar snacks were less inviting.  So I left after just one beer to go for dinner at Honke Owariya, a soba restaurant that has been in operation since 1465!  While purists may insist dining at the original location, I settled for the more centrally located younger branch.
Located in the basement of a building along busy Shijyo Dori, this Honke Owariya Shijyo-Ten does not have the most conspicuous of entrances -- and this may help explain why it doesn't seem to attract as many customers as one might expect of a venerable dining establishment. To be precise, in the time that I was at the restaurant, there were only four other customers -- all of whom weren't only Japanese but appeared to be regulars as they didn't spend much time looking at the menu before ordering.

If I lived in Kyoto, I could see myself becoming a regular patron of Honke Owariya too.  For, yes, I really did very much enjoy the soba meal I ordered that considered of cold soba and seasonal Kyoto-area vegetables with a nice crunch to them despite being bathed in liquid that was a cross between a sauce, dressing and soup!
Afterwards, I decided that the night was still young -- and that I wanted to return to the Asahi Super Dry Extra Cold beer bar for another tall glass of extra cold dark beer.  To my surprise, when I walked back in there, the waitress who had served me before recognized me and proceeded to greet me like an old friend!
This time around, I drank my beer most slowly, taking time to look around the bar more and enjoying observing some interesting goings-on there, including at an area where customers could learn how to properly pour themselves a glass of draft beer.  Something else that I found interesting was that the Asahi Super Dry Extra Cold beer -- and the bars dedicated to them -- were only around until the end of September.  Thus it was that I discovered that I had not only eaten seasonal vegetables that evening but also drank seasonal beer too! :b
Posted by YTSL at 8:26 PM

I sincerely apologize for having accidentally removed your comments! As I recall, you mentioned something about soba.

In mitigation, here's calling your attention to a previous blog entry about a soba restaurant I visited that I think will be of interest to you:-
http://webs-of-significance.blogspot.hk/2011/11/light-this-weeks-photo-hunt-theme.html

My comments which you accidentally deleted were just basically stating that soba was one of my favorite dishes because I like anything made with buckwheat. According to an online source, buckwheat is mainly produced in Hokkaido.

I usually add kelp/seaweed to my soba (Kombu kelp being my favorite, which is also mostly cultivated in Hokkaido). As a matter of curiosity, do you like any of the various kinds of seaweed/kelp?

I like seaweed, and in many forms. And if you're wondering, yes, I did have soba in Hokkaido too -- but at more casual restaurants than Kurosawa in Tokyo and Kyoto's Honke Owariya.