Kodai-ji inspired musings (including about Toyotomi Hideyoshi and Nene) 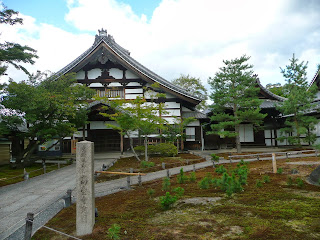 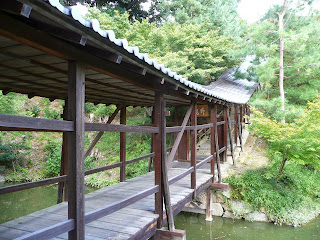 The Zen temple's Garyoro (Reclining Dragon Corridor)
which, these days, is too fragile to actually be walked on 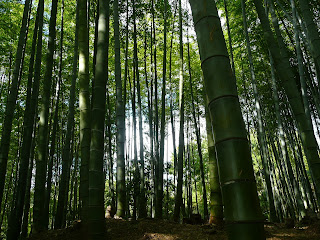 For the second day in a row, I concluded my day's touring at a Buddhist temple where photography was not allowed of the remarkable interiors of its buildings. The day before, it had been Sanjusangendo -- whose 1,001 Kannon statues and statues of 28 other Buddhist deities had taken my breath away and 120 meter length corridors had me filled with awe at the thought of archers who could fire many arrows accurately from one end of it to the other. This time around (on my third day in Kyoto), it was Kodai-ji, the temple established in 1605 by Kita-no-Mandokoro (popularly known as Nene) in memory of her late husband, the daimyo Toyotomi Hideyoshi.


Of the two, Sanusangendo had the more amazing interior sights while Kodai-ji has the nicer garden -- actually, gardens since there's more than one type as well as section of such.  More specifically, the Zen establishment located a stone's throw away from the Ryozen Kannon Temple has a Zen dry rock garden that's similar in type to but stylistically far less austere than the famous one at Ryoanji, along with a stroll garden that ingeniously incorporates the natural scenery into its design.


When looking back, I found that I took just a small number of photos while on Kodai-ji's grounds. Granted that the ban on taking photos of its interiors certainly had something to do with it -- since I definitely recall having been impressed by the interior of the Kaisan-do, especially after the very nice temple attendant who was in that hall gave me a detailed explanation in very good English as to what could be seen in there, and also the Otama-ya (Sanctuary) that's home to wooden images of Toyotomi Hideyoshi and his wife.


On the subject of the daimyo and his wife: They were presented in such a rose-colored light at Kodai-ji that it was rather shocking to find out, via some Googling post-Kyoto trip, that Toyotomi Hideyoshi not only had a second wife and concubine (in addition to first wife Nene) but also was the man who had ordered the execution by crucifixion of 26 Christians at Nagasaki -- the same martyrs, more than incidentally, whose bones are interred in the crypt of the ruined cathedral of St Paul's whose remaining facade is one of Macau's most well known sights!

Of course this is not to deny that Toyotomi Hideyoshi was a major figure in Japanese history. But even before I left Kyoto, I learnt about his less savory side when I came across Zuisen-ji, a temple along Kiyamichi Dori near the site where the 39 women and children of the daimyo's nephew and once designated heir, Toyotomi Hidetsugu, had been ordered executed by Hideyoshi after Hidegutsugu was accused of having plotted a coup against his uncle and was subsequently ordered to commit seppuku.

Perhaps it was for the best that I didn't know these facts when I visited Kodai-ji.  This way I was able to focus and appreciate on the aesthetic beauty of this temple founded in memory of Toyotomi Hideyoshi while there.  On the other hand, I think it's good to get a fuller picture of this powerful man who was by no means a perfect human -- for it serves to emphasize that rulers really should not be completely unquestioned and their wishes always obeyed.
Posted by YTSL at 11:59 PM

The bamboo grove must have been really neat to walk through!

It was -- and I especially liked the sound that the breeze helped it make. :)