Back to blogging post-break 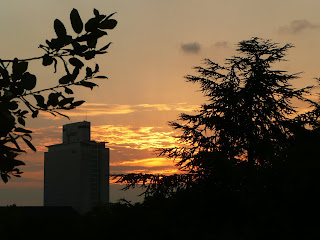 The very first photo I took on my recent
German holiday 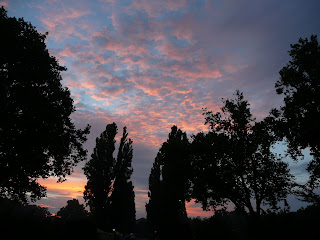 Sunrise in Ludwigshafen
I'm baaack! Sort of -- in that while I've returned from vacationing in Germany (a country I last visited in the summer of 1989), I've still not returned to work and my normal routine as I've set aside two extra days of leave to help me get over the jet lag that comes from having recently been in a part of the world whose local time is six hours behind Hong Kong's.

One and a half weeks ago, it was the other way around... in that I found myself waking up earlier than usual -- and thus being able to view beautiful sunrise scenes -- over at the abode of my good German friend who had invited me to visit her in her home country. But what with my vacation being intended to be a restful one (rather than the kind of whirlwind European tour that too many travel groups are overly-fond of) however, I actually went back to bed after taking those photos and actually slept away the bulk of my first full day in Germany in quite some time!

Still, lest it be thought otherwise, rest assured that I did manage to do and take in quite a bit in the following days. Among other things, I visited my share of cathedrals, churches, museums, castles, biergartens and brauhauses, and nine different towns and cities in all (and these don't include Frankfurt and Munich, the two cities whose airports I saw but not much else). Over the course of my visits, I of course took a whole bunch of photos -- quite a few of which I want to share with others via this blog (whose content is already at a scary 95% capacity)...

...so I hope that people won't mind too much if it becomes German-orientated for a bit over the next few weeks! (And this especially when they see that a familiar face will be appearing now and then as I did not venture out to Germany alone... ;b)

YTSL,
Welcome back! Looking forward to hearing more about your German adventures!

Glad you had a good holiday. Hehe....such a tease....you don't tell your legion of fans where you were going and now the mystery of a "familiar face" who accompanied you.......will we see winkipinki, totoro or ?....

Thanks and glad to "hear" that you, for one, are looking forward to checking out my Germany posts! :)

Legions of fans... hmmmm. As for the teasing: isn't the anticipation and guessing fun? ;b

Glad to read that you enjoyed your well deserved break and I too am looking forwards to your blog and pics of Germany since it might be awhile till my own European vacation.

Welcome back, YTSL! Looking forward to reading (and seeing) the adventures of you and a certain plushy friend. :)

Looking forward to seeing your views of Germany. I've only ever had a couple of brief visits, and those were over 10 years ago, possibly 15.

Heheheh... yes, the familiar friend is indeed a plushie pal... one who I think should be appearing in the next blog entry after the one I just wrote up today! :b

It's interesting to learn that you haven't visited Germany in the past decade or so. Was very surprised to learn on my most recent visit that it's Paris is only a few hours away from such German cities as Frankfurt via the Intercity Express (ICE train)!