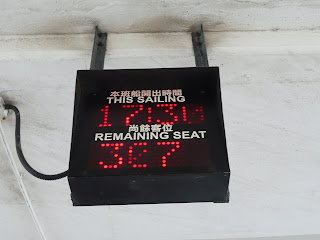 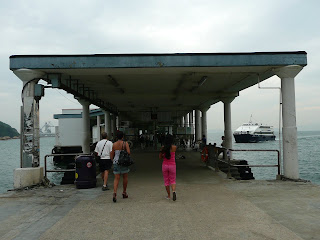 Today, we play the numbers game; or, at least, do something with numbers on account of this week's Photo Hunt theme being a numerical one (pun intended!). ;b

On a numerical trivia note: I generally archive my photos in folders with numerical names. For example, the two photos above are from the 2010-05-23 folder -- numbers which help me to remember that they were taken back on May 23rd of this year.

On that pleasant Sunday, I took my mother -- out here in Hong Kong on one of her visits -- to Lamma Island where, among other things, we hiked the Lamma Island Family Trail that goes across the island from Sok Kwu Wan to Yung Shue Wan. Rather than do a round trip on foot, we took the ferry from Hong Kong Island to Sok Kwu Kwan and then the ferry back from Yung Shue Wan.

As we headed towards the Yung Shue Wan pier, we saw the next ferry fast approaching and lots of other people hurrying to catch it. Even as I did my own bit of rushing though, I couldn't resist pausing to take photos along the way -- including of a helpful electronic indicator box telling folks not only what time the ferry would be sailing out but also how many "seat" (sic.!) remained available on that ferry. (And yes, there really were many vacant seats left on the boat -- so we were able to have our choice of seats as well as comfortably spread ourselves and our bags about on the approximately half an hour ride back into a more bustling, densely populated part of the Big Lychee.) ;b

That sounds like a fun outing with your mother. Great take on the theme. Happy weekend!

great take on this weeks theme.

that is very helpful to know how many more seats are available on the ferry. i think this is the only one i've seen employ this rule. great take.

Hmm.. I don't archive my photos that way since the taken dates would already be in the files. I store them based on Mb. :P

A clever device attached to this ferry! Ferry rides are so relaxing especially when the ferry is not crowded!

Yes, indeedy, re it having been a fun outing with my mom. :)

It *is* helpful, isn't it? And with ferries coming at 1/2 intervals, one can easily -- if they are so inclined -- take a chance and wait for the next one if they feel the one in dock is too crowded!

Ferry rides can indeed be relaxing and fun if they're not too crowded AND the waters are not rough! :)

Looks like you had fun with your mum! I have this habit of staring at counters to avoid getting impatient, especially when I'm at a bank.

I like your take on the theme...and going to that island seem like a lot of fun.

Great take on the theme. I love how you take us to places in Hing Kong many of us would not know existed, Have a great weekend

Cool take on the theme. The ferry ride sounds like fun. Happy weekend.

perfect picture for the theme..good job!

mine is up here!

That's like me ! even when I am in a hurry I stop to take a picture,when I see something for my memes, lol !

The photo is perfect for this week's theme. Are the ferries mostly passenger ferries? We also have a ferry system here in the Seattle area but it is part of the highway system so it mainly used by cars. Our signs usually tell us how long we have to wait which can be up to 2 hours in the busy summer months.

What a great idea that indicator is. Lovely to have lots of room to spread out.

I don't think we have this system here, but the computerized ticketing take care of that!

This is good, so you know whether you have a seat or not.

Great shot for this week's theme!

Yes, indeedy, re having had fun with my mom! :)

Lamma can be a lot of fun -- as is the case when visiting many of the less populated islands in Hong Kong, it can feel like one is going on holiday without having to leave Hong Kong. :)

I'm glad you enjoy my introducing you to less well known parts (to non-Hong Konges) of Hong Kong. :)

If truth be told, the Lamma Island ferry is one of my least favorite Hong Kong ferries (as the waters between Lamma and Hong Kong Island can be on the choppy side). But the island's so nice that one can't be tempted but to go sometime...

I guess we're confirmed shutterbugs -- and comfortable admitting it! ;b

Yes, the ferries are mainly passenger ferries as a lot of Hong Kong's (including Lamma) don't allow cars on them.

I did indeed have a happy weekend. Hope you do/did too. :)

Hmmm, well... the thing with that "seats left" bit is that you can see it some ways before you get to the ticket counter! :b

What a good idea to display the number of seats available! I wish trains did the same.

Yes, indeedy re trains -- and especially per carriage!