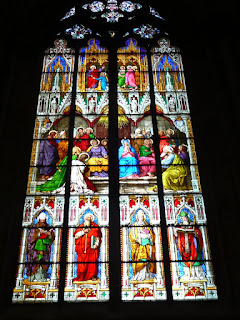 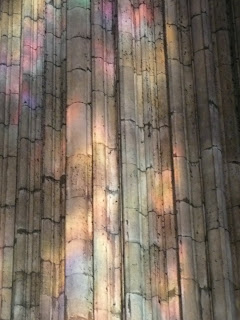 After getting back to the office grind this past week, I am so glad that another weekend has arrived for me to remind myself why I love being in Hong Kong. And/but to think that not so long ago -- this time last week, in fact -- I was still on vacation in Germany...

For those who missed it: I've already shared some photos and thoughts from my recent holiday here, here and here. Thus far, my Germany entries have been roughly in order of when I visited the nine different towns and cities that I did while there. But I'm going to jump a couple of towns to Cologne for this Photo Hunt as it was in its UNESCO World Heritage Listed Gothic cathedral that I saw a collection of colorful stained glass windows like the ones in the first photo above.

A giant cathedral whose construction began in 1248 but was only completed in 1880, Cologne Cathedral (aka Koelner Dom) is an awe-inspiring sight both inside and outside. And as luck would have it, I ended up visiting it twice in two days -- once in the late afternoon, when the sun rays striking some stained glass windows created further colorful sights on a cathedral pillar (see the second photo above); the second time, at an earlier part of the day the next day, when the cathedral's Treasury Museum was open and the area from which one could view its chancel (where the Shrine of the Three Magi) and nine surrounding chapels with their own treasures also was made accessible to visitors.

Almost needless to say, the visits to Cologne Cathedral were among the highlights of my recent German vacation. But truly though, there really were so many of them -- and I most definitely am happy that I did go ahead and take my first vacation outside of Asia since returning to Asia in July 2003 in that European country. :)

Welcome back to PH YTSL. Missed you. I live stained glass windows and this is a lovely example. Have you ever been to Chartres Cathedral? I think that is the epitome of stained glass.

why didn't i think of stained glass window that is perfect for the theme.

Now that is so beautiful. It's a long time since I visited Cologne. I must change that

If you have been to Cologne you have been in the part of Germany where I lived the most, before my father started to work for the Commun Market in 1958 and my mother and I followed him to Brussels.
As it is not far from Brussels either I have been there many times ever since. We lived in Bonn which is very close. The Kölner Dom I know almost by heart, lol and I also remember all the ruins which were still there in the 50th !

the stained glass windows are lovely and colourful.

nice photos here and also from your previous posts. i visited Germany some years ago but it was raining on the first evening when i arrived in Heidelberg so i didn't manage to take many pictures. thank you for taking such lovely photos for me to look at.

Welcome back! We missed you :)
I am so green with envy now looking at your holiday pictures. Your glass-stained window entry is perfect this week's theme.

Stained glass windows are indeed colorful. The ones found in the old cathedrals in Europe are amazing.

Mine is up too, right here:

Magical melee of colour in that stained glass window!

Your stained glass windows are just beautiful. Hope you have a happy weekend.

Stained glass! What a perfect expression of "colorful"!!

Thanks for the warm welcome back. And yes, I've been to Chartres Cathedral -- though it was a while ago... more than 20 years ago, in fact! Still, yes, definitely remember being bowled over by its stained glass. :)

Glad you didn't think of it -- this way, there's more variety in this week's Photo Hunt! :)

When you next visit Cologne, don't forget the museums and to drink some kolsch too! :)

Didn't go to Bonn this time around but I passed through it by train on the way to and back from Cologne. (Was staying with a friend in Ludwigshafen, so took the train from Mannheim.) I saw a photo of all the ruins around the cathedral at the end of the second world war. Amazing job rebuilding the city afterwards.

Thanks and don't be envious, instead be Life Ramblings and use my photos to virtually tour! ;b

What impressed me on this recent trip to Germany was that there are wonderful stained glass of a more recent vintage as well as really old ones.

Great description of what's in that photo! :)

The stained glass windows are beautiful, but I also love their reflection on the stone pillar.

Good take on the theme!

Beautiful photos for this week's theme.

that is so beautiful!! I love stained glass

Oh my, these photos are beautiful and colorful love it! Happy weekend!

WOW... the stained glass was breath taking. Thanks for coming to see mine...

welcome back! this stained glass window is stunning. i am amazed to see such detailed work on stained glass in old churches. such great artisans.

i like your interpretation of this weeks them, those are very colorful
stained glass must have been a nice trip for a fun event i'm sure


my colorful interpretation is on my sari blog today, hope you take a look

Stained glass is indeed something to be loved. :)

Although Cologne Cathedral is old, I'm not sure how old the stained glass is. Seems that a lot got destroyed during the Second World War but then was replaced by newer creations.

Glad you think so!

It was a very nice trip indeed. And BTW, I checked out your entry before you checked out mine, actually! ;b

These are both beautiful choices for the colorful theme. Good to see you back. I just looked through your prior posts from your trip. They are wonderful.

Perfect one for the theme :-)

What a fabulous composition of that stained glass window...wow, that's pretty!

So few North American churches have stained glass windows and often they are so hemmed in by tall buildings that the like almost doesn't reach the windows... So sad. The churches in Europe are so beautiful!

Those are really colorful and nice. I love the play of colors.

Thanks for checking out my prior German-themed posts along with this blog entry. Hope you'll do the same again when you come over again next week. :)

Cheers for thinking so! :)

Thanks. I'm surprised at how good some of the photos turned out. In fact, worried that nothing would be good that I bought a Cologne Cathedral guide book to remember my visit by. :)

I know the stained glass windows in churches and cathedrals were/are meant to be educational but yeah, for me the quality that stands out is their beauty. :)

Good point re North American churches and their tending to be hemmed in by other buildings. Is it not a tradition for them to have graveyards around them?

Love the design and color of the glass window.

There's some effort as well as luck... but ya, I know what you're getting at! ;b

I do too. (BTW, are you a Photo Hunter? Sorry but couldn't find a "Colorful" entry on your blog when I visited.)

Glad you share my love of Asian cinema. Hope you'll check out the Asian film-focused entries on this blog. :)