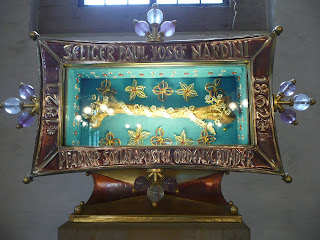 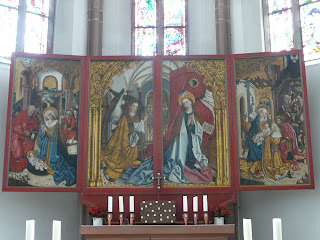 A few years ago on a trip to Bangkok, my mother complained of getting "Wat-ted out" as a result of visiting too many Wats (Thai Buddhist temples) in one day. My equivalent moment came on the afternoon of the fourth full day of my recent German holiday -- and in the middle of visiting a UNESCO World Heritage listed cathedral, no less!

The imperial cathedral of Speyer is an unquestionably impressive monument to Christendom -- and it most definitely is the largest Romanesque religious establishment that I have ever visited in my life. But it also happened to be the third Christian place of worship I was visiting that day -- and fourth religious establishment, if one includes the remains of a similarly Romanesque-era synagogue (in particular, its mikvah that is the oldest remaining Jewish ritual bath in Central Europe) --and seventh in two consecutive days.

And Speyer also is home to a collection of some of the -- sorry if this offends some Photo Hunters and other visitors to this blog, but this is how I have to admit to feeling about it -- more bizarre objects of veneration I have ever seen. Like a jewel encrusted as well as framed human bone(!) that is said to come from a saint; and thus is considered a religious relic. (Other relics in its collection include pieces of wood said to come from the true cross but there really were a lot of human bones on display in that part of the cathedral that also is famous for its crypt being the final resting place of eight German emperorors and kings, four queens and a number of bishops...)

On the other hand, I did manage to appreciate other, more conventional framed objects inside of Speyer's religious establishments -- such as the late Gothic winged Bossweiler Altar of St. Ludwig that dates back to 1485. And even in my "churched out" state, I did (do) recognise that churches and cathedrals, especially in countries like Germany with their long history of Christianity, are homes to impressive religious objects that are bona fide works of art in and of themselves. (Heck, their very buildings often are so as well!) :)

You got me excited because I jumped to conclusion and thought I could see this in Bangkok. haha....

Yes, I'm back to PH and will be posting regularly.

Beautiful. I have been Watted out and Pagoda'd out in Burma. Some stuffy Brit was making jokes about "I'd rather have a whisky and soda than visit another pagoda".

This is something I did not know. Cool photos. :)

loved the term 'wated out'!

Although I am an atheist, I am drawn to the art and, especially, the reliquaries of the Catholic church (as well as Buddhist and other religions). I am always fascinated by the extravagant encasing of a worn fragment of bone. Sometimes the result is gaudy and almost embarrassing but ones like this are beautiful.... sculptural.

I like the first framed picture.
I don't understand either why the catholics put bones and stuff as reliques in their churches and if you count the number of wooden pieces from Jesus'cross in all catholic churches in the world, they could probably put together more than one cross !

Great take on the theme. I love the altar triptych. As I've said on other entries I am not religious but I love devotional art. I love that reliquary too!

As for the bone that is not unusual although it still seems weird. Many churches have relics of saints. the chapel of my school had a fragment of the bone from St Edmund Campion, an English jesuit priest executed during the reign of Elizabeth I

Some relics are a little more strange, like the Turin Shroud. Several churches also used to claim to have bit that as removed from the baby jesus after a certain operation jewish babies have!

Hehe, that should teach you not to jump to conclusions! And welcome back again to Photo Hunting. :)

I can imagine re Burma... I think the trick is to space things out and go for variety within a day. So after Speyer, I did go visit other churches and cathedrals -- only I limited my visits to such places to two a day! :D

What? The possibility of being churched-out or those relics? (Am betting the latter... ;b)

Heheheh... and may you never be wated out. :D

Glad you can see the sculptural in those relics. For better or worse, I was inclined to see more humor -- and thank goodness my Catholic German friend was amused by my amusement!

Have heard that if you put all the supposed pieces of the true cross together, you'd get something closer to the size of Noah's Ark! :D

"the chapel of my school had a fragment of the bone from St Edmund Campion..."

Now you have me really curious to know which school you went to!!!

And yes, I've read about the foreskin relic claims... :DDDDDDD

Believer or not, there is something quite magnetic about devotional pieces like this! Enchanting, sacred beauty!

wow, what a beautiful choice for today's framed theme!

I know that "churched out" feeling well. Same with art museums; there's only so much you can take in at one time.

Love your photos for this theme.

About my street shrines, some are maintained by families, I think, and other by members of the parish churches. They are all different!

I can well imagine your overload! :) And I most certainly agree about the weird relics. I was invited to pay extra to see some in Albi, but I politely declined. All the same, I do love religious art and architecture.

the bone relic is something new to me and i don't remember seeing anything like that before.

I got templed and shrined out after a week in Kyoto. Sometimes too much of a good thing.

I believe that's how some people feel about them... I just can't feel it myself! ;S

Guess you're one of the people Greyscale Territory mentioned! :D

I have a higher tolerance for art museums... but yeah, don't think I could witness three in one day either! ;b

Thanks for your understand (and empathy?)! :)

FWIW, I've only ever seen such things in Germany, Austria and -- these for Muslim rather than Christian relics -- Turkey. Also, come to think of it, I've also seen Buddhist examples -- only not jewel encrusted! :D

A week in Kyoto!!! Oh my... I'm simultaneously thinking "how great" and "I could imagine wanting to run to Osaka ASAP" after that! :D

Hi YTSL, fantastic framed photo choices for this week's theme. Interesting information on both the religious relic and the more conventional. :)

Wow both are beautiful and both depicts meaning. Happy weekend!
Photo Hunt-Framed

Great post for the theme and good shots. I also find framed bones, relics or not, to be a bit on the bizarre side and not my cup of tea so to speak. Happy weekend.

At first glance I was drawn to the first picture, until I read what it is--then I got a bit creeped out! Thanks for the informative post.

By "depict meaning", you mean they have messages? Guess so! ;)

Thanks, glad to know I'm not the only one who feels this way and happy weekend to you too. :)

Teeheehee at your reactions! Thanks for sharing them. :)

My jaw dropped when I saw your selections for this week! I'm a Catholic myself and looking at ornate statues/idols gives me an odd feeling, especially objects that are said to be sacred.

You should also come see the Khmer temples in Siem Reap, and probably you'd feel templed-out =)

Geat take on the theme this week - I've enjoyed looking at the different frames that people have posted.

Hope I won't feel "templed-out" if I do go over to Angkor Wat! :D