In the height of the summer last year, I took the Ngong Ping 360 cable car up the Ngong Ping plateau that is home to the Big Buddha and Po Lin Monastery. After it got a bit cooler a couple of months later, I decided to go up there again (this time by bus) and hike down from there towards Tung Chung new town -- initially along the Ngong Ping to Shek Mun Kap trail but detouring midway to catch the Tei Tong Tsai Country Trail that promised to yield spectacular views.

But although my hiking companion and I were able to take in some good views on that afternoon of hiking on Lantau Island, a few other sights -- that should become apparent as you check out this photo essay -- ended up grabbing our attention more. In any event, suffice to say that there really is plenty to observe when out hiking in Hong Kong -- a place that yields far more of interest, both in terms of cultural along with natural sights, than many tourists, even those intrepid enough to leave the shopping malls to head out to visit Ngong Ping plateau, often realize... 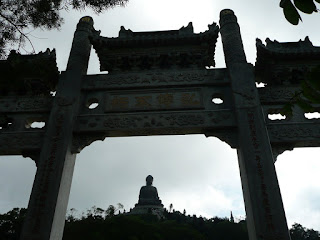 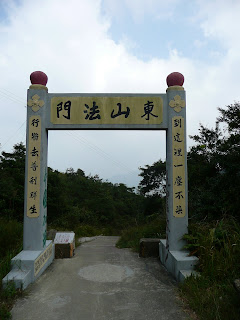 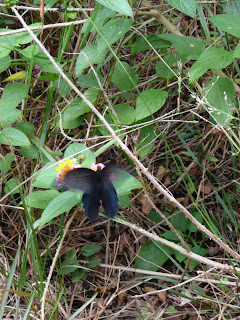 It may not look like much in this photo
but that's actually one of the
largest butterflies I've ever seen! 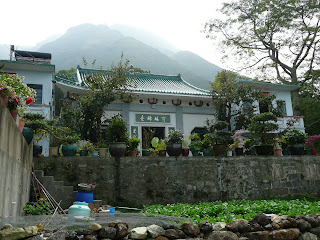 The Po Lam Monastery (which feels much less touristy
than the more famous Po Lin) -- some of whose denizens
were working in the fields, seemingly to the
accompaniment of recording religious chanting 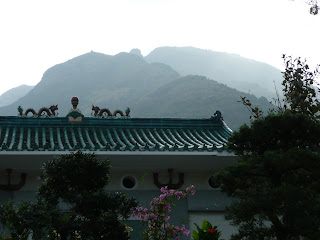 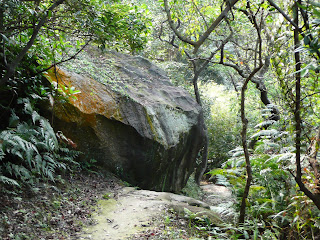 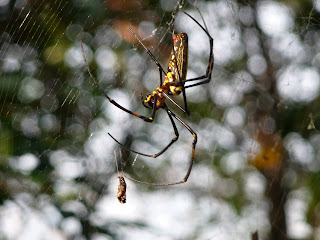 The biggest spider I ever seen about to tuck into
the unfortunate being that got caught in its web! 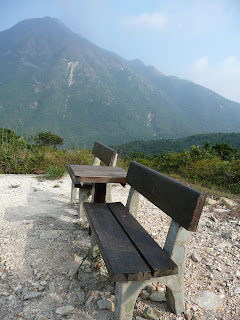 "But what about the views?"
To those who asked: this good enough for you? ;b

Beautiful. The last time I was in HK, I took the trail (don't ask me which one) from Tian Tan to where I needed to catch the ferry. The hike was great, but the most amazing thing was that I walk up on, right in the middle of the trail, a snake eating a snake. Crazy. I stood there watching it for like 20 minutes. I finally had to carefully skirt around it, trying not to disturb it.

You hiked from Tian Tan (Ngong Ping) to Mui Wo -- are you sure? With no bus ride in between??? How long did that take you? And I sincerely hope you didn't hike alone...

...since stories like yours re the snake are among those that dissuade me from doing so as a rule. Also, having over the course of the 30 hikes or so I've been on in Hong Kong, already come across snakes myself 4 times, wild dogs another 4 times (including, most recently, two that appeared BEHIND me as I was climbing down a steep 291 meter hill/mountain in Clear Water Bay Country Park a few weeks ago) and monkeys once... :S

Yes, I remember it taking a while...silly tourist!

While I was fascinated by the whole snake eating the snake thing, it was also very evident at that point that I needed to be more careful!

Now that you mention wild dogs, I have another story from that same hike. I had to follow the road part of the way down before getting to the trail, and at some point I heard yelping - like a puppy. Now I first have to mention that I am an animal lover, and even though I'm a meat eater, I can't stand the idea of an animal enduring pain. I could clearly see where the crying/yelping was coming from - a water drain of some sort. No doubt a dog was stuck in that damn drain but couldn't get out. This also happened to be a time when there was a rash of deaths from rabies in HK! Seriously. Oh my god. It broke my heart, but I had to walk away.

The classic place to clash with monkeys is Er Mei Shan near Chengdu. They will literally take your backpack! It was scary at the time, but funny in retrospect.

Oh dear re your dog story. And re wild animals: saw more monkeys on a hike today -- in the area where parts of "Tactical Unit: Comrades in Arms" was filmed... (Aaaah, Hong Kong!) :b

We also went to Po Lin. It's such a great place. Nice blog and pictures, by the way. You can also visit my HK chronicles of my trip at LivingTogetherBlog

Glad you enjoyed your visit to Po Lin (and Hong Kong in general). And wow re your blog: it looks very professional! :)