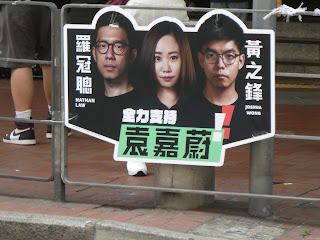 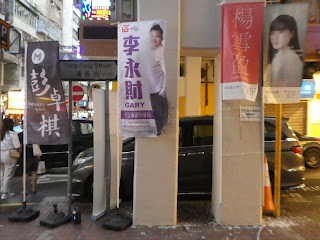 Candidates' banners near a polling station for the
democratic camp's primaries


The Wuhan coronavirus is still threatening Hong Kong (with the territory having recorded 38 new cases today and 28 yesterday; the majority of them local transmissions).  But the authorities appeared to have taken the weekend off as far as political persecutions are concerned.  At the very least, after appearing to threatening to disrupt -- if not outright disallow -- the democratic camp's primaries for the September Legislative Council elections, voting ended up taking place as planned yesterday and today; just with a three hour delay to the start time yesterday (to upgrade a security key after Friday night's police raid on the Public Opinion Research Institute (PORI) office).


Actually, as it turned out, things went better than planned -- at least as far as voting numbers were concerned.  More specifically, the organizers of the primaries had set a 170,000 participation target to validate what might well be Hong Kong's last free election but, on the first day alone, 228.982 registered voters cast ballots in this political exercise designed to consolidate support for the democratic camp so it can win more seats in the September Legislative Council elections.  And, some two hours after the polling closed, the total tally over the two designated days of voting has been preliminarily ascertained to be over 610,000!

As Jeppe Mulich Tweeted: "I think it's fair to say that this is bigger than anyone expected."  And as Antony Dapiran reminded with a Tweet (which I'll render into "regular" speak:  "When looking at primary voter numbers this weekend, bear in mind these are actual verified real people with a system to avoid duplicate votes. As opposed to the pro-government signature campaign with zero verification or safeguards: multiple/fake/unauthorized signatures all “count” for government."

When considering the impressive -- and remember that there were serious worries as late as Friday that people would be too intimidated or insufficiently interested to turn up and make their voice heard -- numbers, bear in mind too that they signify the collective resolve of those who decided to turn up to send a message to the authorities and the world at large with regards to their determination, defiance and love of democracy, and Hong Kong.  For while voting was a breeze at some polling stations, others (including ones at Yuen Long and Tung Chung) required people -- no thanks, I am sure, to a number of venues being pressured to pull out as polling stations -- to wait for hours, in super long lines and while the "very hot" weather warning was in force (from as early as 6.45am today)!

A few of the heartening voter stories I've read over the past two days include the following: an old lady told a volunteer at a polling station, "I don’t have a smart phone. I wasn’t aware of the primary at all- till the cops went to PORI last night. I didn’t even know what PORI is, but the police raid is just not right"; another determined elderly woman who was still smiling after waiting for three hours to cast her vote;  and a third elderly lady who willingly walked, with the aid of a cane, over to a polling station to cast her vote as a matter of course.

Essentially, it looks like many Hong Kongers, be they old, young or middle-aged, came to the same conclusion this weekend of "when a government is actively discouraging you to vote, it's a sign you really need to vote", and then proceeded to act on it!  Put another way: this was an alternative way to register their protests against the authorities and what they are trying to do to Hong Kong.


At the same time, I know I am not alone in fully realizing that, after all this, those seeking democracy for Hong Kong will -- not just might -- be dealt yet more body blows.  (As it was, I had expected these unofficial polls to be disrupted by the police at some point yesterday and today -- and still am surprised, and also somewhat suspicious, that they weren't.)


But the point is this: unlike many (outsiders) who have given up on Hong Kong, Hong Kongers haven't done so.  At the very least, we are determined to not take things lying down and are still willing to give things the old college try -- because, well, there's a possibility that things can happen if we attempt to make them be so; whereas if we don't do anything, our goals most certainly won't be achieved.
Posted by YTSL at 11:59 PM

I have to wonder...Is voting a requirement there?

No, voting is not a requirement here. And note that these primaries were unofficial -- so really optional! So the fact that so many people took part tells you how important we consider the right to vote and have a voice to be.