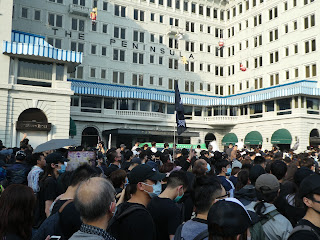 Protest march in front of The Peninsula this afternoon 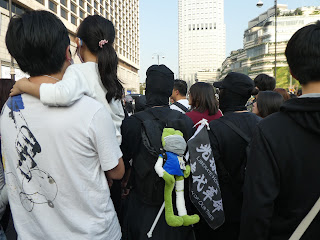 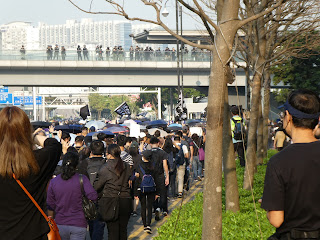 For some reason or other, the Hong Kong police issued letters of no objection to three different protest marches today -- the first time they had done this for any protest march since September 8th.   There were people who wondered whether this was gesture of goodwill from the local constabulary or if it was all the trap.  But the first, which took place this morning -- and whose aim was to express concern over the impact of police tear gas on children's health --  took place without incident.  And ditto re the second, which was planned as a thank you gesture to the American government for passing the Hong Kong Human Rights and Democracy Act earlier this week.

Consequently, hopes were high that the third protest march of today, staged to urge the public to remember their fight for their five core demands -- and in doing so, serve as a reminder that Carrie Lam and her Beijing overlords have still not bowed to the will of the (majority of Hong Kong) people -- would be peaceful too.  Indeed, many wo lei fei, believing that this would be the case, turned up to publically protest -- in a number of cases, with young children in tow or senior citizen parents for company -- for the first time in months.

Upon getting to Tsim Sha Tsui at the official start time of this afternoon's protest march, I found a veritable sea of protesters at the official start venue: the area around the Clock Tower.  It was the largest protest crowd I've seen in a while, in fact; and one whose large size I think that both the police along with march organizer had not expected to have to deal with.  Sadly, the police turned once more to their usual, dubious "crowd control" methods involving prematurely revoking their permit for the march and then tear gassing the crowd that I can personally attest to having included children, elderly folks, people in wheelchairs and musicians playing Glory to Hong Kong on such as a saxophone while marching along the route.

As it so happened, I was far enough away on the occasions that the police employed tear gas and other weapons on protesters today.  At the same time though, I was close enough to the action that I worried -- like was the case the last time I was in Tsim Sha Tsui for a protest -- that police actions would cause a stampede that would end up with me getting hurt along with hundreds, if not thousands, of other people as we frequently found ourselves in super crowded as well as log jammed situations.

Fortunately, I managed to extricate myself from that scary situation and ended up being among those who managed to get to the official march end over in Hung Hom.  I must admit to thinking a bit before I went ahead and decided to take a ferry over to North Point -- whose reputation for being a pro-Beijing bastion gained added notoriety after thugs sought to attack pro-democracy protesters there back in August.  And despite warnings issued from a fellow passenger for people to be on the lookout for danger, I manage to get home safe and sound from there.

What with tear gas and pepper balls also having been fired at Prince Edward last night, it is looking like the peaceful window opened by protesters has been shut once more by the police.  To those who go on and on about "violent protesters": please do realize that us protesters really have tried to give peace a chance time and time again.  Also, that the sheer size of many a protest in Hong Kong makes it so that it really is hard, if not downright impossible for the crowd to disperse quickly -- and that it really doesn't help when people trying to move along get tear gassed in the bargain.
Posted by YTSL at 11:59 PM

Haven't heard much of this recently.
Coffee is on

Really? I think that this past week saw the most coverage of Hong Kong in months because of the landslide win by pro-democrats in the District Council Election and also the passing of the US's Hong Kong Human Rights and Democracy Act!