Solidarity with Uyghurs by Hong Kongers faced with oppression 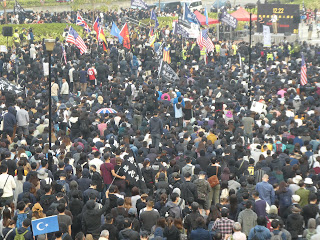 At a protest rally that was peaceful when I was there 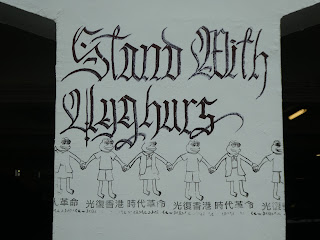 "Stand with Ugyhurs" was the main theme of this afternoon's rally 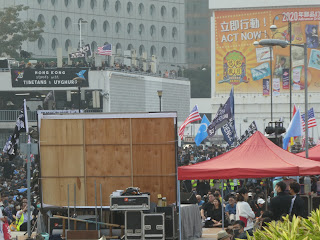 But as more than one sign noted, what's sought is for various peoples
to stand together and act now against the Communist Chinese regime
Some two and half years ago, Xi Jinping came to Hong Kong for Carrie Lam's installation as Chief Executive and the massive security lockdown that was effected ahead of his visit got me having dark portends that Hong Kong could become another Xinjiang (i.e., police state within China).  While I may have been in the minority in harboring such thoughts and worries then, that's far from the case now.
Indeed, I'd go so far as to suggest that one big impetus behind many Hong Kong protestors' stubborn resistance against what are overwhelmingly stronger and more powerful forces -- in the form of not only the Hong Kong government but also the Beijing regime behind it -- does appear to be the fear that if we give up the fight, Hong Kong people will suffer the fate of the Ughyurs of Xinjiang.
In trying to explain to the world why Hong Kong matters, Hong Kong protestors have been attempting to send out the message that what Communist China already has done to Tibet and in Xinjiang, it is in the process of attempting to do in Hong Kong -- after which, the Communist Chinese regime will attempt to do to the rest of the world.  And it was just a matter of time before many people in Hong Kong got to realizing that we really should stand with the Uyghurs -- and, for that matter, Tibetans too -- since we have a common oppressor in the Communist Chinese regime.
For the record, the first mention I saw of Uighurs (aka Uighurs) by anti-extradition bill protestors was by way of graffiti on a wall of the Legislative Council Complex after it was broken into on July 1st (Specifically, "China will pay for its crimes against Uighur Muslims").  Since then, I've seen references to Uyghurs and Xinjiang on Lennon Walls and also signs carried by protestors at pro-democracy rallies and marches.  But it was only today that there finally was a protest event with solidarity with the Uyghurs as its main theme.
Held this afternoon at Edinburgh Place, the Human Rights Rally of Solidarity with Uyghur attracted a sizeable crowd despite the day's air pollution index being on the high side.  For what may well be the first time ever, the flag of East Turkestan could be seen at a Hong Kong protest rally -- along with the more familiar likes of Taiwan's, Tibet's, British colonial Hong Kong's, the United States of America's, Germany's and those calling for Hong Kong independence along with ones bearing the slogans "Liberate Hong Kong, revolution of our times".

The enthusiastic flag waving not withstanding, my impression was that this afternoon's rally was actually not particularly impassioned.  All in all, I think the protest mood was peaceful, and even tempered somewhat by it happening to take place in an area that was fringed by Filipina domestic workers in a festive mood on their day off.  And the presence of protestors carrying Pepe the Frog plushies and drawings of cat memes, and eating ice cream from a Mobile Softee ice cream van parked nearby only made the protest rally seem less intense to me than a number of others I've attended at the same Central venue.

After being there for 80 minutes or so, I decided to take my leave despite the rally still going on.  While I did spot some riot police in the vicinity while I waited for the bus that would transport me out of the area, little did I think that they would end up descending upon Edinburgh Place and prematurely ending the legal rally just minutes later!
The trouble reportedly began with someone having taken down the Communist Chinese flag that had been flying in front of City Hall.  The riot police looked to have gone to the flag's rescue in record time.  And then all hell looked to have broken loose, with pepper spray, pepper balls and rubber bullets being shot as well as batons wielded, and a police officer pulling his gun out and aiming it at bystanders -- while simultaneously holding a pair of glasses in his gun hand -- after he dropped his can of pepper spray!!
Despite a black flag warning having been given, no tear gas had been fired though -- thank goodness for small mercies?  Actually, no, since the way things stand, it really does seem that the Hong Kong police care more about objects than for the physical safety of their fellow human beings.  Just like Hong Kong's supposed leader, Carrie Lam.
Posted by YTSL at 11:59 PM