A mega protest march on a cool weather day (Photo-essay)

800,000.  That's the number of Hong Kongers that today's pro-democracy march organizers, the Civil Human Rights Front, reckons took to the streets on the last Sunday before this year's Human Rights Day and one day before the six month anniversary of June 9th's 1 million (plus one) person protest march.

Many of us in today's crowd who are determined to persist until our five demands are met would not argue if the protest march attendance figures were actually closer to 1 million (and it might well be so since the official numbers apparently exclude those who joined the march closer to the heart of Causeway Bay or decided to leave east of Central).  After all, there were lots of people near the march starting point (i.e., Victoria Park) at around 4.30pm, when it was announced that the head of the march had already reached the scheduled end destination (Chater Garden) a number of kilometers away!  And aerial views courtesy of video clips like this and photographs like this and this should only add fuel to that impression.

For those who welcome getting views from within a massive protest march instead or also, here's sharing a few of the photos I took this afternoon as I walked from Victoria Park (which I entered around 2.55pm) to the area around Chater Garden (which I reached at around 7.20pm -- close to four and half hours later!).  And while I do wish I had encountered Doraemon and a host of other interesting characters at today's march, I still had quite the experience -- not least because it really is quite the thing to behold the resolve and unity of so many seekers of justice and democracy, a good number of whom I have no doubt that I've been marching on the same route multiple times over the past few months... 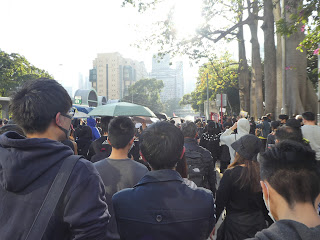 It took me about 50 minutes to get onto the road from
Victoria Park to properly begin the march this afternoon! 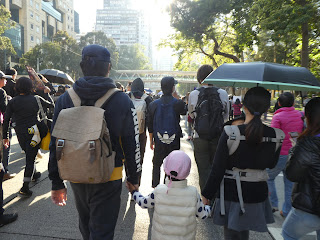 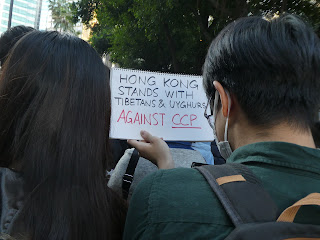 Checking out a hand-written sign of solidarity with other peoples
being oppressed by the Chinese Communist Party during a
point in the protest where blocked roads ahead caused us
to stand with (the rest of) Hong Kong for up to an hour! 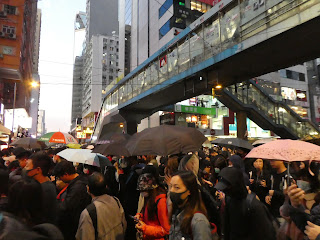 After a short route detour prompted by fears of an impending
tear gas buffet courtesy of the riot police, I rejoined the march
further down Hennessy Road as the sun began to set 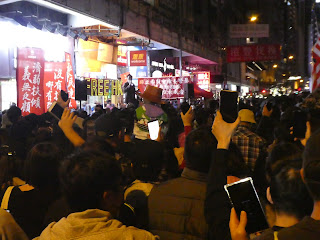 Nightfall and we were just really getting going! 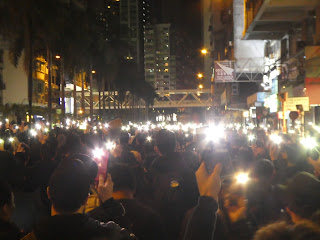 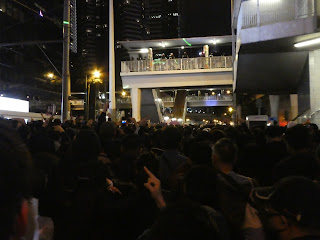 The contempt and hatred that many Hong Kongers feel for
the local constabulary these days cannot be underemphasized... 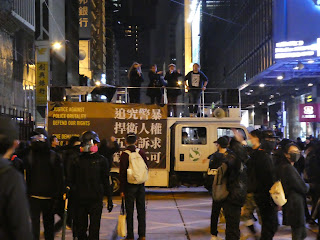 ...and justice against police brutality really is a key demand
of Hong Kong protesters, and has been since June 12th
Posted by YTSL at 11:59 PM

True. But in Hong Kong's case, the problem has been more the rise of Communist China's Xi Jinping -- though it certainly doesn't help that the American president and other world leaders have generally appeared willing to stand by while Xi's regime clamps down on people in various parts of China and bids to get their way in various parts of the world.