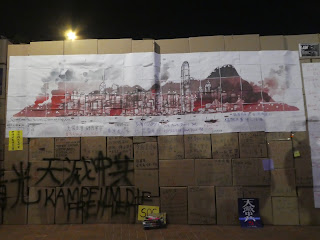 Hong Kong is burning on the 30th anniversary
of the start of the Velvet Revolution :( 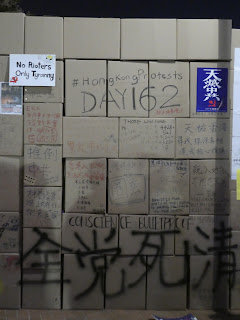 Messages on a cardboard mock-up of the Berlin Wall
erected this evening in Edinburgh Place, Hong Kong 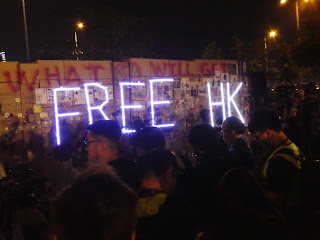 What many Hong Kongers want


In a since superseded November protest schedule for Hong Kongers, there had been plans to commemorate the 30th anniversary of the fall of the Berlin Wall with a rally at Edinburgh Place on November 9th.  But the death of Alex Chow Tsz-lok on the morning of the day before put a stop to what would have been a happy as well as peaceful protest event.


Although Hong Kong's troubles have continued into this week -- and, in the eyes of many (including myself) actually increased in intensity and seriousness -- no such decision was made to cancel a rally at Edinburgh Place this evening to commemorate the 30th anniversary of the beginning of Czechoslovakia's Velvet Revolution (and defacto beginning of the end of Communism in Eastern Europe).  And while public transport problems had caused me to abandon plans to attend a rally in support of, and to praise, Hong Kong's firefighters and ambulance workers on Thursday night, I arrived in Central this evening with sufficient time to peruse the messages written and plastered on a cardboard wall that had been erected there, and even add a couple of my own!


A few minutes after 7pm, the rally officially began with announcements, including of the main themes of today's event, in Cantonese and English (with sign language interpretation also utilized at the rally).  A video was also screened which began with a look at Eastern Europe in the years immediately after the Second World War, included film footage showing the emergence and rise of Poland's Solidarity along with the creation as well as fall of the Berlin Wall, and ended with a recap of recent events in Hong Kong.


Also shown at the event were video recordings of what took place over in Mainland China in the summer of 1989.  And it once more tore at my heart to see idealistic students with little idea of what lay ahead for them and their country on June 4th of that year as well visual documentation of the massacre that Hong Kongers have continued to commemorate and mourn even while many Mainland Chinese can't, won't or are outright ignorant about.

Three other things compounded the agony of this evening's re-watch of the massacre of students by the People's Liberation Army 30 years ago.  First was the fact that we were doing so just meters away from the Hong Kong headquarters of the same military force under the absolute control of the Chinese Communist Party.  Second was the same People's Liberation Army having ventured out into the streets of Hong Kong yesterday afternoon for what was clearly a propaganda stunt that I sincerely hope that the vast majority of Hong Kongers can see through (and thus react to with horror).


Most upsetting of all was that midway through this evening's events, participants were sharing images posted online of Hong Kong Polytechnic University in flames (on the evening of what happens to be International Students' Day) and messages of the Hong Kong police having threatened the protesters there with the use of lethal force, resulting in an exodus of a good portion of the rally's crowd -- presumably to head over to try to help out the beleaguered protesters over across Victoria Harbour.  In all honesty, this was one of those occasions when one gets incredibly tempted to cease being a wo lei fei (peaceful, rational, non-violent) protester and one could sense the frustration and shame of people who elected to stay at Edinburgh Place and be so.


A friend visiting from Germany invoked the protests led by Mahatma Gandhi and Dr. Martin Luther King last night as examples of successful non-violent movements and why Hong Kong protesters should eschew violence.  But when I asked her if she thought Gandhi or King would have been successful against the Nazis, she fell silent.

And yes, I know that it can seem like a cheap shot to some to compare Communist China to the Nazis.  On the other hand, one can't deny that Communist Chinese leaders have been responsible for a whole lot of atrocities and deaths, including of democracy-seeking university students and their supporters at Tiananmen Square.  Also, it can't be too much exaggeration to state that, after what happened over at the Chinese University of Hong Kong on Tuesday, people have good reason to fear that the Communist China-backed Hong Kong police may carry out their version of the Tiananmen Square massacre at Hong Kong Polytechnic University tonight. :(
Posted by YTSL at 11:59 PM