At a rally organized by mothers in support of Hong Kong, particularly its youth 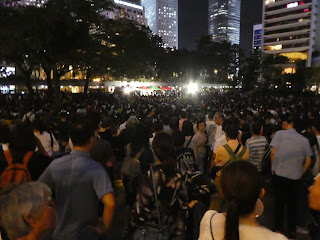 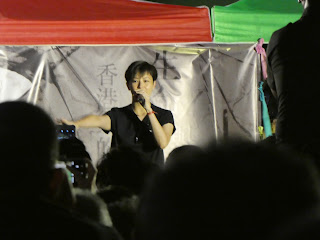 Denise Ho lent her star power to this evening's rally


After a few days' break, the anti-extradition protesters are back at it once more.  This evening's rally was the opposite in many ways of the most recent protest event until today though.  Attended by lots of middle-aged and elderly folks who spent the vast bulk of the event seated on the paved ground of a former military parade ground turned cricket space turned public park, it was organized by a group of concerned mothers who want Carrie Lam and her government to put aside their arrogance and care more about the lives of young Hong Kongers than the broken glass and such at the Legislative Council Complex.

After calming music filled the air around Chater Garden early on in the evening, a few mothers shared their thoughts and were followed by a few fathers.  Along with expressing support for the younger generation of Hong Kongers, whose safety and future they worry about, they also were open in their condemnation of what has been described as a regime that feeds on children -- and more than one parent was moved to call for genuine universal suffrage for Hong Kong as well as make the demands that anti-extradition bill protesters have now become pretty familiar with.

As was the case at last Thursday's anti-extradition bill protest rally, activist singer-actress Denise Ho was there to lend her support, voice and star power to the event.  Also given opportunities to air their views were younger Hong Kongers -- one of who got so emotional at times that his voice threatened to break and he found it hard to speak.  Whenever a speaker, regardless of age, was in need of encouragement though, the crowd -- estimated by the organizers to be some 8000 strong, and larger than the previous protest event organized by the mothers on June 14th in the wake of the police brutality that shocked Hong Kong on June 12th -- would shout out "Ga yau" (Add oil) to get them going again.

Hearing and seeing the large crowd assembled at Chater Garden this evening, I couldn't help but think back to the last two times that I had seen the place so filled with people.  The first,  back in December 2016, had felt like a celebratory political pep rally as it took place soon after Leung Chun Ying (then the most despised Chief Executive Hong Kong had ever had) announced that he was stepping down.  The second, held in July, 2017, two weeks after 777 replaced 689 as Chief Executive, was far more downbeat in nature, as the crowd that evening had assembled there for the start of a candlelight march in memory of Liu Xiaobo, during which I couldn't help but shed a few tears.

This evening's event fell squarely between those two in terms of mood.  There was sadness and outrage at the Hong Kong government looking to be more upset by the physical damage to the Legislative Council Complex (whose spirit had already been destroyed by those who had condemned its material devastation) than, say, the suicides of young protesters who couldn't envision a positive future for Hong Kong and themselves.  On a more positive note, however: today's turnout is a very good indicator indeed that much of Hong Kong remains on the side of those protesting against the extradition bill and strongly disapproving of Carrie Lam and her administration.  It also got me feeling that there's still a lot of fight left in those who truly love and care for Hong Kong.
Posted by YTSL at 11:59 PM